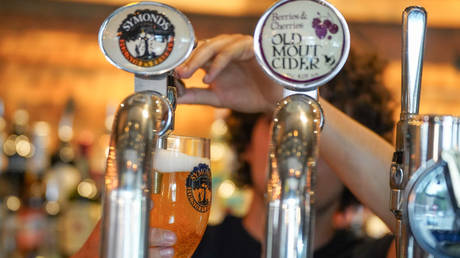 The over 300% surge in energy prices could force pubs and brewers across the UK out of business in the coming months, industry leaders have warned, as cited by Sky News on Tuesday.

According to the report, the bosses of six of the UK’s largest pub and brewing companies have sent an open letter to the government urging it to act in order to avoid “real and serious irreversible” damage to the sector.

Unlike households, Britain’s businesses operate without any sort of regulated price cap. Some pub owners complain that they are struggling to even find suppliers willing to provide them with power when the time comes for contract renewals.

READ MORE: One in four Britons won’t turn on heating this winter – study

“While the government has introduced measures to help households cope with this spike in prices, businesses are having to face this alone, and it is only going to get worse come the autumn,” the CEO of Greene King, Nick Mackenzie, told Sky News, noting that one tenant’s energy bill had jumped to £33,000 (just over $38,000) for the year.

“Without immediate government intervention to support the sector, we could face the prospect of pubs being unable to pay their bills, jobs being lost and beloved locals across the country forced to close their doors, meaning all the good work done to keep pubs open during the pandemic could be wasted,” Mackenzie warned.

[ad_1] The London Metal Exchange (LME) has limited new deliveries of Russian zinc and copper to its warehouses as part...

[ad_1] Chevron may reportedly be allowed to drill for crude if Caracas agrees to “free and fair” elections Washington is...

[ad_1] The eighth package of restrictions includes a price cap related to the maritime transport of Russian oil for third...

[ad_1] Russia’s Alrosa was reportedly excluded from the new sanction list after Belgium blocked an EU embargo Alrosa, the Russian...

[ad_1] There is a high risk of a global recession due to central banks’ anti-inflationary measures, a statement says The...