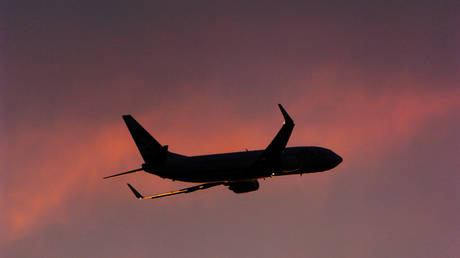 The US Justice Department announced on Wednesday it had obtained a warrant to seize a Boeing 737 jet owned by Russian oil major Lukoil.

According to court documents cited in the press release, the aircraft “flew into and out of Russia in violation of the Department of Commerce’s sanctions against Russia.” The statement indicated that the American-made aircraft flew without obtaining licenses from the US Commerce Department.

Airplanes and aircraft parts are subject to export rules because of their potential military use and national security implications.
The plane in question is a $45-million Boeing 737, which bears the tail number VP-CLR and is believed to be in Russia. The jet last entered the US in March 2019 when it carried Lukoil executives, including the company’s then-president and CEO, Vagit Alekperov, to Houston, Texas.

The press release noted that since 2014, Lukoil has been subject to sectoral sanctions imposed by the US Department of the Treasury’s Office of Foreign Assets Control. Alekperov is also on the US list of sanctioned Russian individuals.

Western countries have been on the hunt for Russian assets to sanction after Moscow launched its military operation in Ukraine in February. Thousands of Russian individuals have since been sanctioned, with their properties and money seized or frozen by the authorities in the US and other countries, as well as by the EU.

Next post British pubs at risk of closure – industry