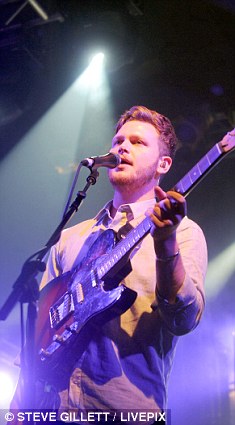 Alt-J are four Leeds University graduates with one claim to fame: their debut album, An Awesome Wave, has just won the Mercury Music Prize for the Album of the Year. At their first London show since, they could have been expected to wallow in their triumph. If they were a hip-hop act, they would have talked of little else.

In the event, they didn’t mention it. The only thing being celebrated was Thom the drummer’s birthday: the others presented him with a cake, fondly brought on by their all-female support band, Stealing Sheep.

Like a once-scruffy neighbourhood, rock music is being rapidly gentrified. In the age of Mumford & Sons, we are getting used to hearing songs made by nice young people, but Alt-J take this to another level.

The first thing lead singer Joe Newman says is: ‘It’s lovely to be here – thank you so much for coming.’ The last thing he says is: ‘You’ve been amazing, we’ve had a lovely, lovely day for Thom’s birthday.’

Asked what they would do with their £20,000 Mercury cheque, Alt-J said they would buy flights to somewhere nice, and a slap-up meal in a restaurant – for their parents. Whatever happened to youthful rebellion?

But if all this makes them sound conservative, they are not. They are worthy winners of the Mercury, because they have moved music forwards. It took them five years to release their album and they used the time to develop a distinctive sound.

Newman’s vocals tend to start off pure as a choirboy before veering into an arty warble that stays just this side of irritating. Thom Green’s drums are all clicks and clacks, as if he is trying to be a machine.

Both of them, along with the bass player Gwil Sainsbury, studied fine art, and their canvases are crisp Mondrians rather than chaotic  Pollocks. 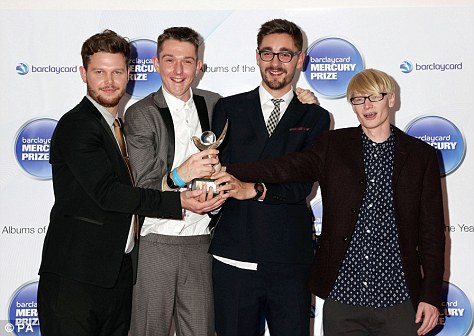 Nice Boys: (From left to right) Joe Newman, Thom Green, Gus Unger-Hamilton and Gwil Sainsbury of Alt-J after they were announced as winners of the Mercury Prize

Newman’s guitar and Gus Unger-Hamilton’s synths are deployed as daubs of colour, never overdone. And almost every track has a catchy melody, a crunchy rhythm, or both. The whole package is complex, but effective.

The lyrics are studenty, but not in a bad way. In a world overstocked with love songs, it’s safe to say that nobody else has released one called Tessellate, or used the chat-up line ‘triangles are my favourite shape’.

Even the band’s name is triangular: on an Apple Mac, Alt-J is the keyboard shortcut for the Greek  letter delta. Their one concession to showmanship is to have a big neon delta sign behind them.

In rock ’n’ roll, the delta usually means the Mississippi delta, the crucible of the blues. Alt-J are in a different tradition, more English, eccentric and electronic. They were on a roll even before the Mercury, and now they are in the spotlight, their singles – none of which has gone higher than No 75 – are crying out for re-release. As well as Tessellate, Breezeblocks and Something Good come across as hits-in-waiting. 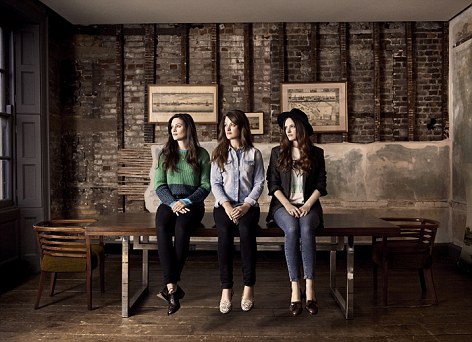 The Staves are also part of the polite-pop movement, but they lean towards the traditional. They are three sisters from Watford, Emily, Jessica and Camilla Staveley- Taylor: one better than the Pierces and the Webb Sisters, then.

They sing folk songs with a twist of Seventies singer-songwriter introspection. One reason why this generation of musicians are seldom rebellious is that they can’t argue with their parents’ record collection. Mr and Mrs Staveley-Taylor, both music-lovers, brought their girls up on The Beatles, Simon & Garfunkel, and Crosby, Stills, Nash & Young, and it shows in their ear for an elegant tune.

Their debut album, Dead & Born & Grown (Atlantic, out tomorrow) co-produced by Ethan Johns and his father Glyn, is entrancing from the opening minute of Wisely & Slow, which features no instruments at all – just the Staves’ three voices, playing off each other as only siblings can, blending, diverging and blending again.

You may struggle to work out which sister is which, but you don’t need to: just sit back and enjoy the beautiful noise.

Previous post Bonobo that appears to be cradling a mongoose may actually be taking it for dinner, experts claim