A film about the Iranian  hostage crisis of 1979-80? You might assume it would cover the disastrous attempt to recover the 52 U.S. diplomats held in the embassy in Tehran by militant Islamist students.

Eight American servicemen died in that bungled rescue and in the opinion of many it cost President Carter the election.

But instead, Argo, the new film from  the increasingly admired Ben Affleck, concentrates on another tale that is so astonishing it is difficult to believe, of six Americans who managed to slip out of the embassy unnoticed, just as the students were breaking down the doors.

They eventually found sanctuary in the home of the Canadian ambassador, but were still trapped in Tehran, at a time when traitors to Ayatollah Khomeini’s Islamic revolution were being hanged from construction cranes and admitting to being a US diplomat was tantamount to saying you were a spy. 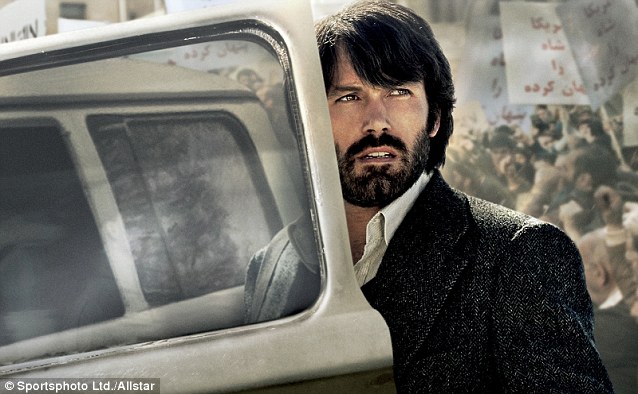 Argo is a veritable masterclass in the sort of cleverly built and brilliantly maintained screen tension that leaves you feeling physically exhausted by the final credits.

From the chaotic outset, you can see how accomplished a director Affleck has become since making his debut five years ago, and why he’s increasingly compared to the great Clint Eastwood as an actor-director.

Roving camerawork and razor-sharp editing superbly contrast the ferment outside the embassy with the growing panic within. Then the order comes: ‘Burn everything!’ The rioters have broken through the gates. As terrified diplomats are seized and blindfolded, the end seems nigh. 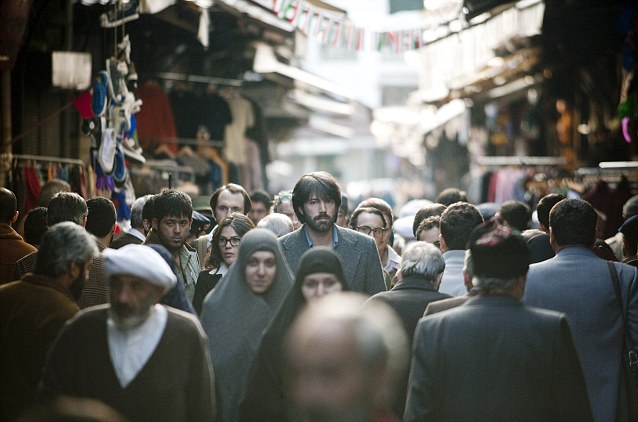 Affleck as Tony Mendez walking through the streets of Iran in his new movie, Argo

Then the mood switches entirely: the story moves forward several weeks, to Washington.

Presidential aides, defence chiefs and CIA bigwigs are desperately trying to find a way to save the six ‘house-guests’. What has the might of the U.S. come up with? Escaping on bicycles . . . despite it being winter in Iran, with snow on the ground and the border 300 miles away.

The laughter that greets that revelation marks an important turning-point: Argo isn’t just gripping, it’s going to be funny too.

The shift in tone could easily undo all the good work of the hard, documentary-style scenes in Tehran. But laughter is almost unavoidable, as the eventual rescue involves setting up a fake film company in Hollywood, publicly announcing plans to make a sci-fi fantasy and travelling to Iran, pretending to be Canadian, to scout for locations. As someone says: ‘It’s the least bad idea we have . . . by far.’

Its architect is Tony Mendez (unshowily played by a bearded Affleck), the CIA’s top man at ‘exfiltration’ – getting people out of tight spots – which is just as well, as in Tehran the students have got hundreds of schoolchildren sifting through shredded embassy documents, and they gradually realise that some diplomats are missing. 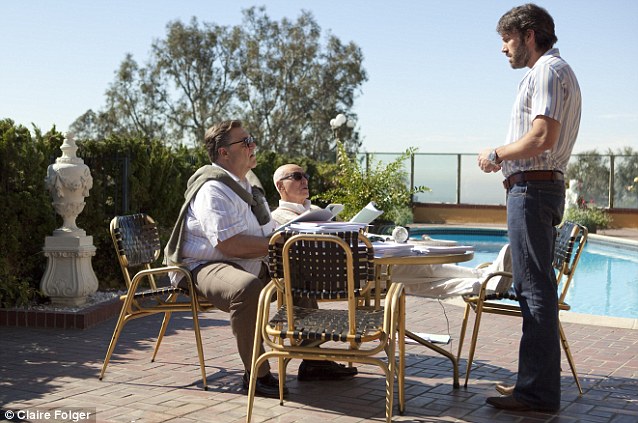 But out in Hollywood, the comedy shows no sign of abating. Alan Arkin steals every scene as a veteran director brought in to add another layer of reality to the fake film, which has a real script, hand-drawn storyboards and the working title of Argo.

He reassures Mendez that he’ll have no trouble passing himself off as a movie  producer. ‘You want to come to Hollywood, act like a big shot but without actually doing anything? You’ll fit right in.’

That sort of in-joke could be straight out of Mel Brooks’s The Producers or Robert Altman’s The Player and is certainly helping Argo to be talked of as a picture to look out for come award time.

But it’s so much more than that: the production  wonderfully evokes the late Seventies – the facial hair is particularly good – and it’s clear that the location-scouting team has a real eye for architecture of the era.

But it’s Affleck (aided by having George Clooney and his frequent partner Grant Heslov as producers) who brings it all together, squeezing every last drop of quality out of Chris Terrio’s astonishingly smart screenplay, securing pitch-perfect performances, and keeping us on the edge of our seats up to an ending marred slightly by movie cliche. It’s one of the best-made thrillers you’ll see all year and not one to be left in a hurry . . . or you’ll miss a fascinating closing-credits postscript that comes courtesy of President Carter himself. 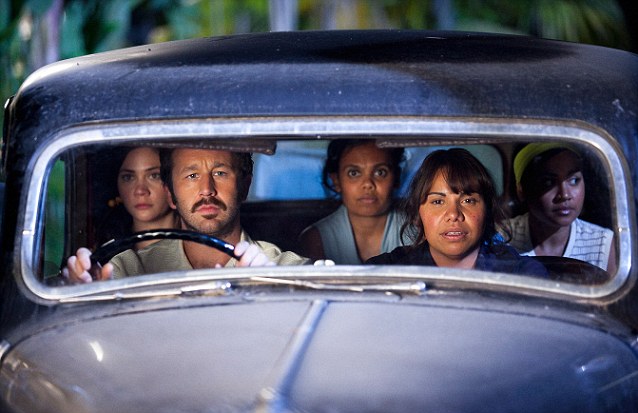 The Commitments, Alan Parker’s wonderful melding of young Dublin chancers with classic soul music, is one of my favourite films. It comes very readily to mind as The Sapphires gets tunefully under way. Yes, we may be in the  Australia of 1968 but it only takes the appearance of Chris O’Dowd for the resemblances to become almost uncanny.

Suddenly, our trio of Aboriginal songbirds have an Irish manager who’s obsessed with soul music, gives them the full ‘white on the outside, black on the inside’ spiel and even name-checks Wilson Pickett (an iconic figure in The Commitments) at one point.

He may not go quite as far as asking them to shout ‘I’m black and I’m proud’ but it’s a close old thing.

So while The Sapphires can’t claim much in the way of originality, the good news is that it’s a lot of undemanding musical fun, underpinned by a sharply funny script, another likable, career-enhancing turn from O’Dowd as Dave Lovelace, and winning performances from the four actresses (the trio quickly becomes a quartet) who play The Sapphires.

But for all its crowd-pleasing charm, the lack of dramatic tension is noticeable.

From the moment they first open their mouths, we know the girls can really sing, robbing us of any concerns about whether they’ll make the grade or not. One of them has cut out a newspaper ad looking for acts to tour Vietnam to entertain troops, so we know where they’re headed too. 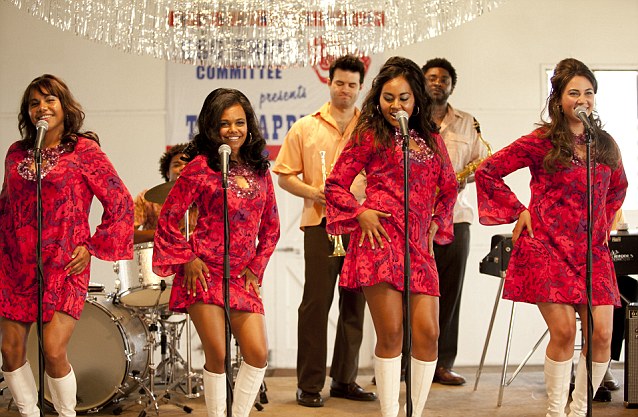 The Sapphires: The singing trio quickly becomes a quartet in this feel good film

Soon the only question is whether Dave and the group’s feisty leader, Gail (Deborah Mailman), will succumb to their obvious mutual attraction. That’s fun and nicely played but I’m not sure it’s really enough to sustain an entire feature film.

Unsurprisingly for a modestly budgeted picture, the scenes in wartime Vietnam aren’t very convincing, and a night-time hold-up looks like it might have been staged in someone’s back garden. But that scene also marks the only moment when director Wayne Blair abandons his safe, sweet, crowd-pleasing formula and opts for something stranger and more magical. A little more of that and the film might have been great, not just tuneful, lightweight fun.

People Like Us is an emotional tangle of a film, well acted by a cast including Chris Pine, Elizabeth Banks and Michelle Pfeiffer but suffering from enough creative  misjudgments along the rather long way to leave it short of its intended impact.

Pine plays Sam, an angry young businessman from New York who goes to the funeral of his estranged music producer father in Los Angeles.

There he is handed a wash bag containing $150,000 and a note from his father asking him to take it to a certain address. When he gets there and finds an attractive young woman (Banks) living with her son, he assumes she is his father’s mistress, but the truth is more complicated.

Banks makes an attractively feisty presence; Pfeiffer is good if slightly wasted as Sam’s mother. But too much hangs on Sam’s reluctance to reveal his true identity (a reluctance that becomes rather creepy), and it’s hard to credit an old rocker’s tastes apparently ranging from King Crimson to, er, Kajagoogoo.

ALSO SHOWING: From Devil drugs to a Titan of his trade… 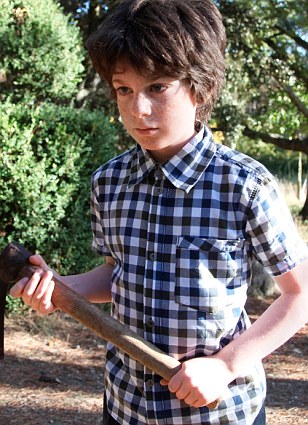 New voices in British film are often regarded with scepticism by audiences and cinema owners who, with good reason in these straitened times, prefer safer ground when stumping up their cash.

So let’s get one thing sorted now: Sally El Hosaini’s directing debut My Brother The Devil (15) is unlikely to tear it up at the box office. She does, however, bring a freshness and compassion to the now-hackneyed urban genre with a drama set in, of course, Hackney.

Naive wannabe Mo (Fady Elsayed) and his handsome drug-dealer brother Rashid (James Floyd) live with their Egyptian immigrant parents in a council flat. Mo is doing well at school but is tempted into the path of drug-dealing when he sees his brother so well respected. Mo idolises Rashid but in his first attempt to really help him, he witnesses a fatal stabbing. While the death of a fellow gang member gives Rashid pause to reflect, Mo finds himself drawn in.

El Hosaini keeps her camerawork nimble, her dialogue spry and, most importantly, her characters whole. Emotionally intelligent and dramatically solid, this feels like a movie only this film-maker could have made – and sure enough, we discover that it was inspired by the death of her own brother aged 24.

Releasing the comedy Grassroots (15)in the week of the American election could offer a sweet antidote to the billions of dollars of campaign hype. It is based on the true story of a local primary in which Grant Cogswell (Joel David Moore), a maverick Seattle music journalist, runs against a well-established politician (played by Cedric The Entertainer) on the issue of improving the city’s monorail.

The film is enjoyable for a while but then founders badly, until I was baffled as to what it was really about – the end credits answered that question with a montage of the world’s finest monorails. So, if you fancy a film about nice monorails, this is just the ticket.

Mother’s Milk (15) is a gentle British comedy set in the pleasant environs of a Provence mansion during the summer holidays. Based on an award-winning novel by Edward St Aubyn, it is told from the viewpoints of members of a quarrelling family whose matriarch lies dying having bequeathed the pile to a charlatan hippy healer (Adrian Dunbar). It is not without its spiky observational humour or neat literary touches, but it does feel like a Sunday-night television drama.

The man behind stop-motion’s finest hours – Clash Of The Titans, Jason And The Argonauts, One Million Years B.C. – gets just reward in the jaunty documentary Ray Harryhausen: Special Effects Titan (PG) in which luminaries including Steven Spielberg praise Ray’s influence. However, the many clips of his old-school movie monsters are all that’s needed to press home  his genius for hand-crafted detail, and to show how sadly lacking such a human touch is in most of today’s computer-driven blockbusters.