Fancy a Slash of milk with that? Artist creates portraits of musical icons – using cornflakes

Sometimes it pays to play with your food: A New York-based artist has constructed meticulous portraits of famous musicians with cornflakes. 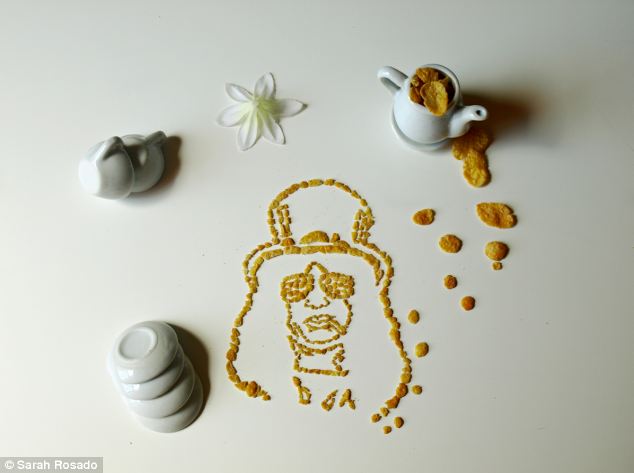 Appetite for construction: This cornflake portrait of Guns ‘N Roses guitarist Slash is easily recognizable in his signature top hat and sunglasses 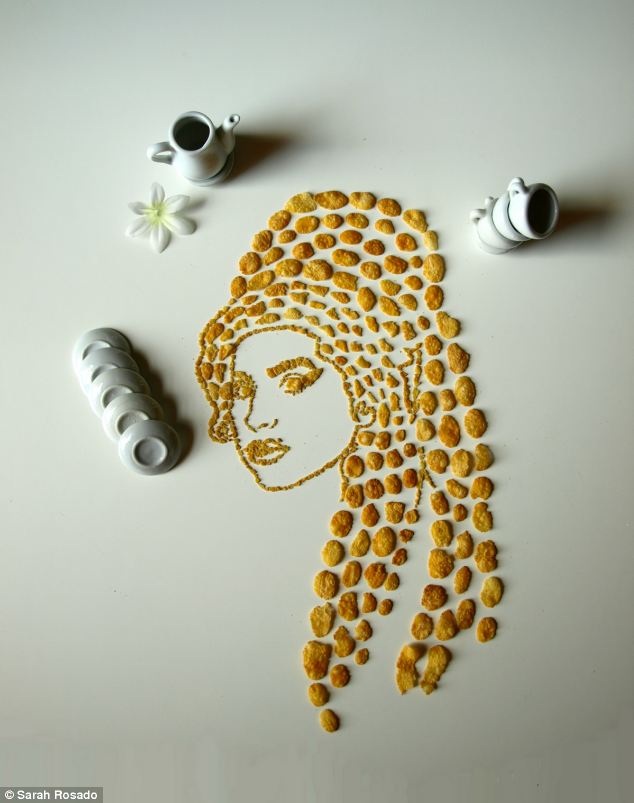 As Thrillist notes, ‘Ironically, the lead singer of Korn did not make the cut.’

Rosado tells Yahoo! that she came up with the idea while eating cereal and listening to oldies and R&B music, and that each piece took roughly five hours to make.

She says the process involved sketching the artists, crushing the cereal before placing it over the drawings and then using a pin to get the facial features just right.

According to her website, Rosado’s penchant for art began at age five when she ‘found herself scribbling drawings all over her notebook and everything she could get her hands on.’ 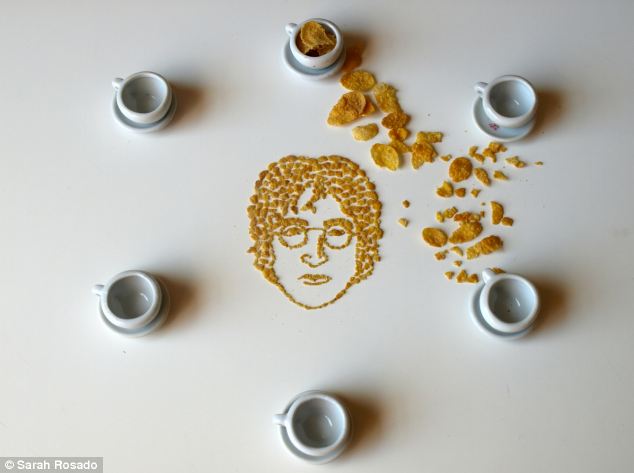 Ain’t he sweet: We no longer have to Imagine what John Lennon would look like rendered in cornflakes 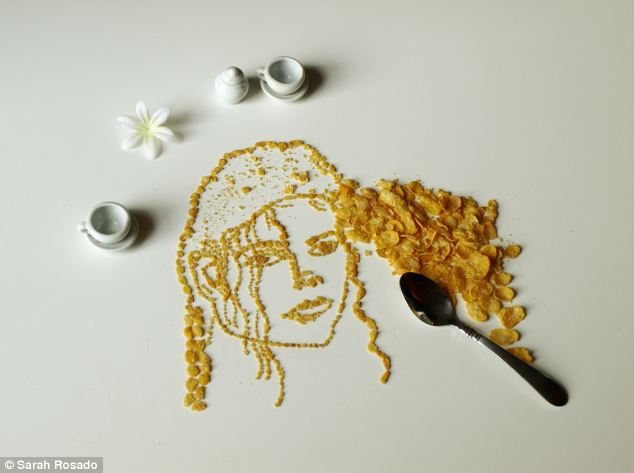 King of corn pop: Rosado was likely thinking ‘Beat It’ as she crushed the necessary number of flakes to produce Michael Jackson’s delicate strands 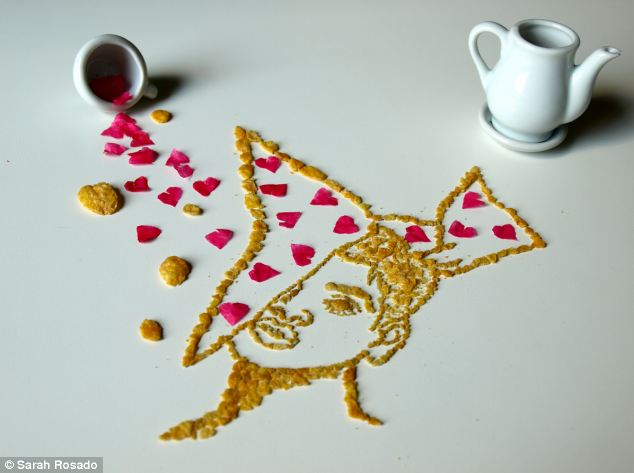 She later ‘developed an interest in photography focusing on capturing images and other creative scenes that are intended to fool the eye of the beholder with thought provoking and illusional images that are open for different interpretations by the viewer.’

Last year, she told Virago magazine, ‘I find myself always stepping out of my comfort zone since I love to experiment and challenge myself with different ideas.’

She added, ‘I am always looking at other artists’ work online and was impressed by many works that include images created with food, flowers and other objects.’ 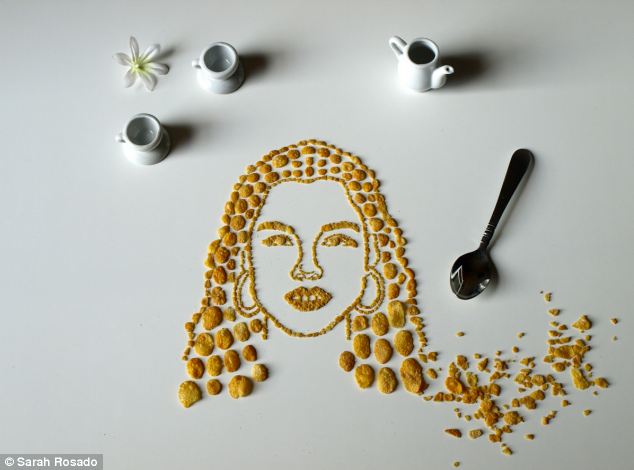 Breakfast state of mind: Alicia Keys gets a crunchy makeover 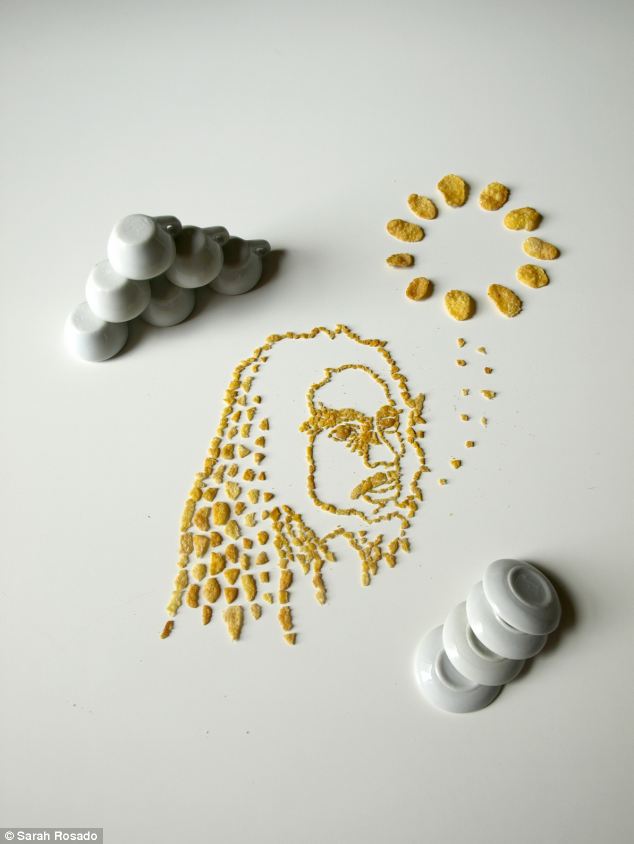 Rosado’s attention to detail can also be seen in her ‘Dirty Little Secrets’ series, in which she created illustrations of various objects using dirt as a medium.

‘I wanted to challenge myself to do something totally different to what I was used to doing and unlike anything ever seen before,’ Rosado told the Baltimore Sun in January. ‘That’s how my dirt collection was created.’