Elon Musk’s SpaceX has landed another $1.4 billion contract to send astronauts and cargo to the International Space Station (ISS) in the coming years.

The announcement means SpaceX will spearhead five more astronaut missions under the space agency’s commercial crew program – which would bring the space company to 14 total missions awarded by NASA worth almost $5 billion.

Under NASA’s existing contract, SpaceX’s Crew Dragon spacecraft and reusable Falcon 9 rocket will send cargo and up to four astronauts to the ISS.

Elon Musk’s SpaceX has landed another $1.4 billion contract to send astronauts and cargo to the International Space Station in the coming years 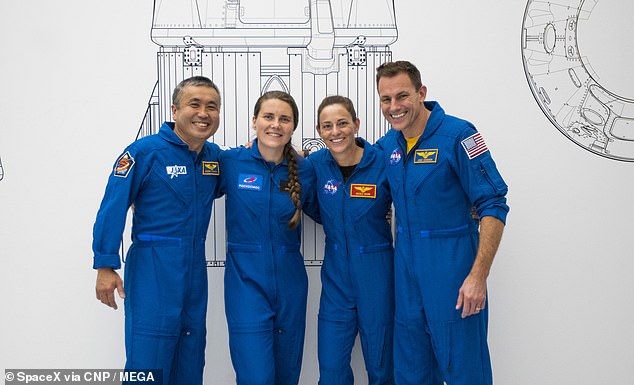 Currently the company is involved in Crew-4 that launched in April.

The new partnership means SpaceX will handle space transport for Crew-10, Crew-11, Crew-12, Crew-13 and Crew-14 flights to the ISS.

It also ‘allows NASA to maintain an uninterrupted U.S. capability for human access to the space station until 2030,’ the agency said in a statement. 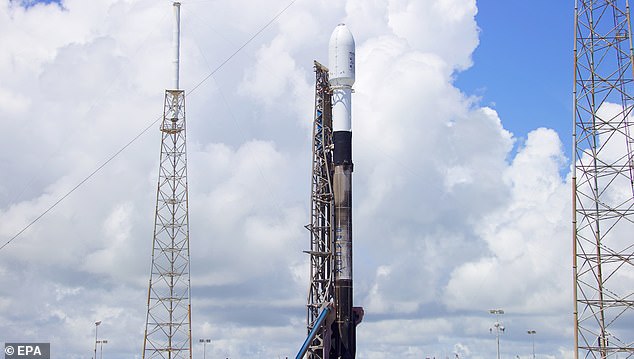 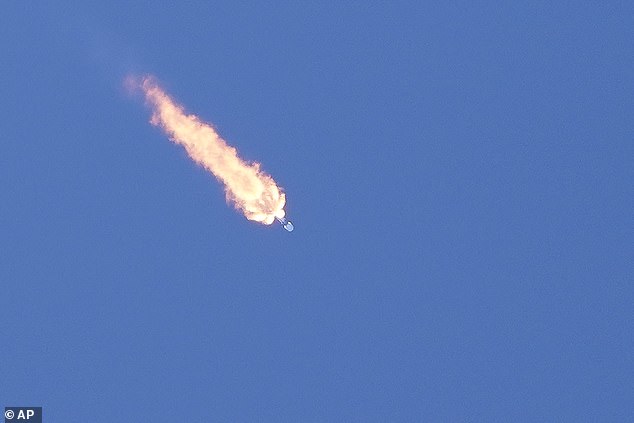 In 2014, NASA awarded contracts to Boeing and SpaceX as part of its commercial crew program. The value of Boeing’s share is $4.2 billion 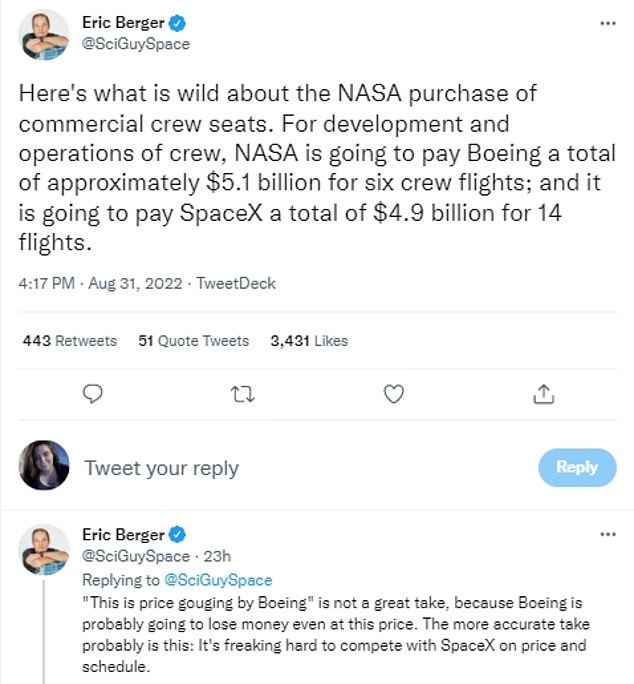 In 2014, NASA awarded contracts to Boeing and SpaceX as part of its commercial crew program. The value of Boeing’s share is $4.2 billion.

However, Boeing has yet to launch its Starline spacecraft.

Eric Berger, senior space editor of Ars Technica, pointed out on Twitter that on a per launch basis, NASA is getting far more from its partnership with SpaceX than Boeing.

Berger added: “This is price gouging by Boeing” is not a great take, because Boeing is probably going to lose money even at this price. The more accurate take probably is this: It’s freaking hard to compete with SpaceX on price and schedule.

The Seattle-based aerospace company is now targeting February 2023 for its first Starliner mission with astronauts aboard to the ISS – as it grapples with a costly and significantly delayed timeline.

The first attempt to put Starliner on an orbital test run in late 2019 was cut short after software issues sent the vehicle off course – and that was followed by two years of troubleshooting, reports CNN.

SpaceX has been sending astronauts to the ISS since May 2020. Prior to partnering with SpaceX, NASA was reliant on paying Russia for use of its Soyuz rockets to ferry humans to the ISS.

‘Think how the Cape has transformed, think about all of those abandoned launchpads on the Cape, and how they are roaring back to life,’ NASA Administrator Bill Nelson has previously said.

Crew-4 was set to carry out hundreds of scientific experiments, including ongoing research into growing plants without soil in space.

Another effort involves developing an artificial human retina, leveraging the microgravity environment of the ISS to help deposit layer after layer of thin films of protein.

The technology ‘could eventually be used to replace damaged photoreceptor cells in the eyes and potentially restore meaningful vision to the millions of people who suffer from retinal degenerative disease,’ explained NASA scientist Heidi Parris.

NASA plans to keep using the ISS until the end of its life cycle in 2030, at which point it will partner with private entities.

Jeff Bezos’ Blue Origin was given the green light and $130 million for its Orbital Reef Station in December.

Two other firms, Northrop Grumman and Nanoracks, received even larger sums at that time to build stations in low Earth orbit.

The March 2 test, the first launch of U.S. astronauts from U.S. soil in eight years, will inform the system design and operations (Artist’s impression)

The capsule measures about 20 feet tall by 12 feet in diameter, and will carry up to 7 astronauts at a time.

The Crew Dragon features an advanced emergency escape system (which was tested earlier this year) to swiftly carry astronauts to safety if something were to go wrong, experiencing about the same G-forces as a ride at Disneyland.

It also has an Environmental Control and Life Support System (ECLSS) that provides a comfortable and safe environment for crew members.

Crew Dragon’s displays will provide real-time information on the state of the spacecraft’s capabilities, showing everything from Dragon’s position in space, to possible destinations, to the environment on board.

Those CRS-2 Dragon missions will use ‘propulsive’ landings, where the capsule lands on a landing pad using its SuperDraco thrusters rather than splashing down in the ocean.

That will allow NASA faster access to the cargo returned by those spacecraft, and also build up experience for propulsive landings of crewed Dragon spacecraft.

[ad_1] This year's Nobel Prize in Physics has been awarded to three scientists for their research into quantum mechanics. Alain Aspect, John...