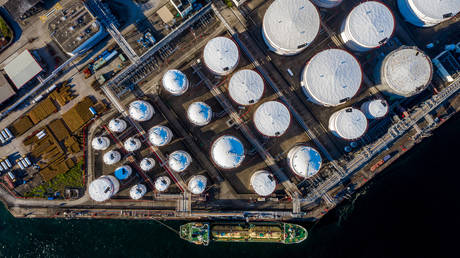 According to the article, China, the globe’s largest LNG buyer, has been reselling some of its excess volumes in the international market. The surplus is attributable to weak domestic demand as Covid-19 restrictions linger on.

As the EU struggles to secure energy supplies ahead of the heating season and amid the drop in gas deliveries from Russia, it has been buying Chinese LNG in the spot market despite it being more expensive.

For instance, the Chinese LNG trader JOVO Group recently disclosed having resold an LNG cargo to a European buyer. China’s biggest oil refiner, Sinopec Group, also reported on an earnings call earlier this year that it has been selling its excess LNG in the international market. Reports say that the company has sold 45 cargoes of LNG so far this year, or about 3.15 million tons. The FT estimates that the total amount of Chinese LNG resold in the first half on 2022 may top 4 million tons, which is equivalent to about 7% of Europe’s total gas imports during this period.

Overall, according to the research firm Kpler, the EU’s LNG imports soared 60% year-on-year over the first six months of 2022. However, the FT analysts warn that China may not be able to come to the bloc’s aid for much longer. Once the lockdowns are finally fully lifted and the country’s economic activity bounces back, its huge energy demand will return and there will likely be no surplus LNG to sell.

[ad_1] Russian gas flow to European customers may be resumed via the remaining Nord Stream 2 string after Gazprom checks...

[ad_1] ‘Hidden’ sanctions on Russian exports should be lifted, agriculture minister says The deal that unblocked Ukrainian grain exports is...

[ad_1] The recently introduced plan sparked a public outcry and, along with the new ‘mini-budget’, sent the pound to an...

[ad_1] The group of oil-producing nations will meet in person this week for the first time since March 2020 OPEC...

[ad_1] The Russian ruble is set to become the official currency for the Donetsk and Lugansk People’s Republics, as well...

[ad_1] The process would be time-consuming and costly, according to Russia’s deputy PM Russia may be able to fix the...