Casualties of war face the enemy within

It’s 1984. In the wake of the Falklands War and against the backdrop of the Troubles, five squaddies and an officer are laid up with injuries at the  Queen Elizabeth Military Hospital in Woolwich.

Jonathan Lewis was once stuck on such a ward as a young officer with an acute cyst on his bottom, and what he heard and saw forms the basis of his play, Our Boys, first performed in 1993.

As much as anything, it’s about killing time. Trooper Joe (Laurence Fox) has the lightest wounds. Rifleman Ian (Lewis Reeves) has a brain injury; an Ulster Ranger (Cian Barry) is there with a leg wound that may be all in the mind; a gunner, Mick (Matthew Lewis), is in for a circumcision, while a fusilier called Parry (Arthur Darvill) lost his toes to frostbite when an officer forbade him to remove his sodden boots. 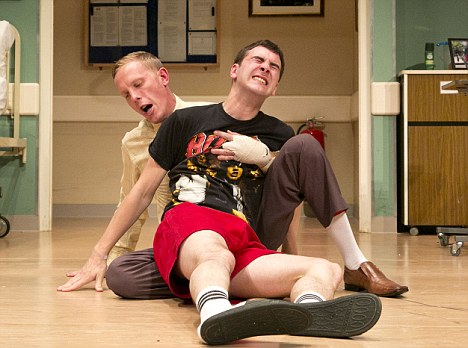 Struggle: Laurence Fox and Cian Barry in Our Boys

Jolyon Coy plays the officer who reluctantly joins the japes, and exists, socially, in class limbo. He’s the only one to wear proper pyjamas but turns out to be a scholar, not a toff.

Most of the banter is as coarse as sandpaper: bowel trouble and circumcision provide ample scope for lots of Carry On-style comedy. But there’s also a sense of just how vulnerable these bedridden men are.

The cast is terrific, especially Fox, who is more coiled with anger than any of the others.  A survivor of an IRA bombing, his closing monologue is a devastating glimpse of the iceberg of pain that lies beneath the men’s visible wounds.

The play is full of compassion and humour – I laughed at the game of Beer Hunter, in which the men play Russian roulette with shaken cans of lager. But when the authorities rumble  the illegal party, the group’s solidity is undermined by an  act of betrayal.

Between the scenes comes the stabbing sounds of the era’s music, including The Jam, The Clash and XTC. David Grindley directs  with piercing insight into tenderness and rivalries  on the ward.

This is a funny, sorrowful evening, and an admirably non-tub-thumping comment on how cruelly injured soldiers become surplus to requirements having laid their lives on the line. It’s as shamefully true today as it ever was.

Previous post Experts are concerned about mysterious pneumonia in Argentina