Physical activity guidelines laid out by U.S. health officials – markers that a vast majority of Americans are not reaching – are still inadequate for a person who wants to maximize their lifespan, a new study finds.

Researchers from Harvard University, in Cambridge, Massachusetts, found that reaching guidelines set by the Department of Health and Human Services (HHS) in 2018 was likely not enough. For a person to limit their all-cause mortality risk as much as possible they would likely have to double or quadruple the requirements each week.

The HHS recommends for every American adult to get at least 2.5 hours of aerobic exercise each week – or only half of that if the activities are vigorous.

Americans are largely failing to meet these guidelines already, though. The Centers for Disease Control and Prevention (CDC) revealed earlier this week that only around half of Americans are reaching the fitness marker.

Sedentary lifestyles have largely contributed to America’s issues with diet-related conditions. The CDC reports that more than 70 percent of Americans are overweight, and over 40 percent suffer from obesity. Just over ten percent have diabetes and heart disease remained the leading killer of people in the U.S. even through the COVID-19 pandemic. 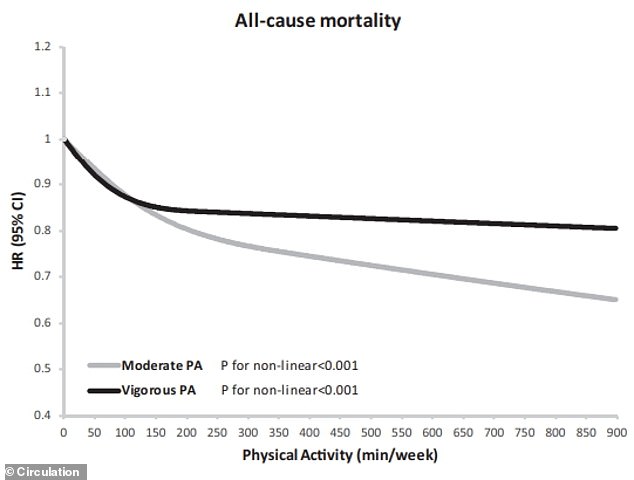 Researchers found that reaching the basic aerobic fitness goals could reduce a person’s risk of all-cause mortality significantly, though reductions were more pronounced for those that managed to double – or even quadruple – those metrics 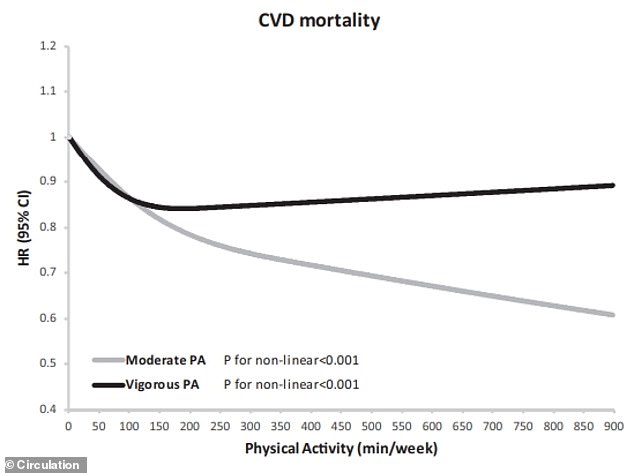 Researchers, who published their findings Tuesday in Circulation, gathered data from 116,221 adults between 1988 and 2018. Data was from the Nurses’ Health Study and the Health Professionals Follow-Up Study.

Each one of the participants completed a questionnaire on their weekly and daily physical activity. They were then periodically followed up with up to 15 times to gauge their health, or if they had died at some point during the study period.

Just under 50,000 participants died at some point during the follow-up period. Those who had regularly met the two-and-a-half hour fitness goal reduced their rate of all-cause mortality by 19 percent.

Fitness is especially valuable against heart disease, as reaching goals could reduce death from that condition in particular 31 percent. Aerobic exercise alone cut risk of death from any other condition by 15 percent.

Those who are especially concerned about extending their life, or avoiding heart disease, should go even further with their exercise regimen, though.

The research team found that those who doubled HHS guidelines for weekly aerobic fitness reduced their risk of death by up to 29 percent.

If a person were to quadruple recommendations – meaning they reached a full ten hours of exercise each week – then they reduced risk of all-cause mortality by nearly 40 percent.

Hitting the ten hour marker is an ambitious goal, though, as that would require nearly 90 minutes of exercise each day.

In America, reaching even the baseline 150 minute a week – around 20 minutes per day – has become a challenge for many.

A report published by the CDC Tuesday found that only 46.9 percent of American adults were reaching that marker.

Men were found to be the most likely to reach that marker. Adults aged 18 to 34 of either gender were the likeliest to reach exercise goals. 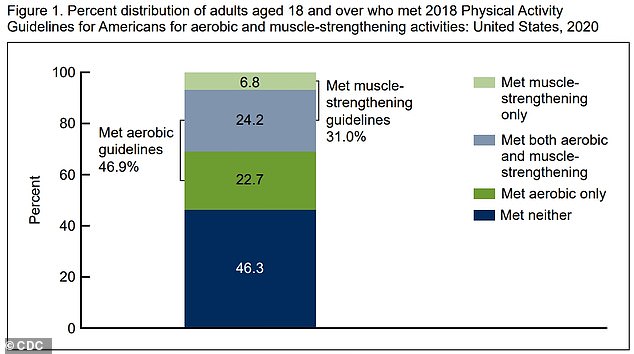 The CDC survey found that only 24% of American adults are reaching weekly exercise recommendations, and only around half are meeting one of the two requirements 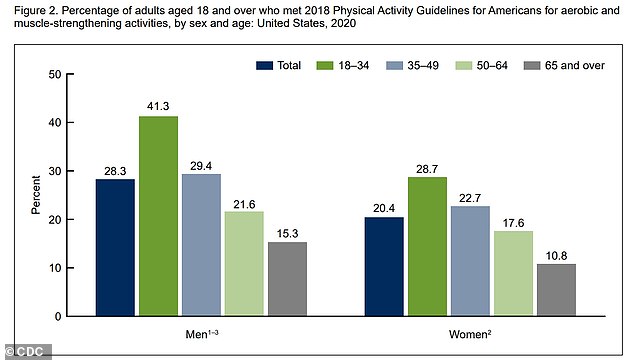 In both men and women, those aged 18 to 34 were most likely to reach exercise recommendations – with fitness rates decreasing in older age groups

The CDC survey also included HHS markers for strength exercise, which recommends a person perform activities that work-out muscles across their entire body on at least two days of every week.

Combined, only 24 percent of adults were found to hit both goals.

White men and women were both most likely to hit exercise goals when compared to other races – though the margin between white, Asian and black men was very slim – all falling just around 30 percent.

The racial gap was much more pronounced among women. While 24.3 percent of white women hit designated markers, 18 percent or less of black, Hispanic or Asian women did.

Income played a large role as well, with those with a household income double the federal poverty line twice as likely to reach goals as those below the limit.