The lifespan of the average American dropped once again in 2021 – hitting its lowest point in over 25 years and declining in back-to-back years for the first time since the 1960s, a Centers for Disease Control and Prevention (CDC) report reveals.

The average American now lives to 76.1 years of age, nearly losing a full year of life from the 77 years of life figure recorded a year earlier, and a 1.8 year drop from before COVID-19 in 2019. It is the first time U.S. life expectancy dropped in consecutive years since 1963, and the largest two year fall since 1921.

Covid’s deadliest year was 2021, where the massive winter surge to start the year followed by the summer Delta variant-fueled wave proved to be mostly responsible for the 460,000 deaths attributed to the virus. Unintentional injuries soared as well, contributing to the loss in life expectancy, combined with slight increases in heart disease, liver disease and suicide deaths.

Asian Americans have the longest life spans even after losing 2.1 full years of life between 2019 and 2021. Hispanic Americans were struck the hardest by the first two years of the pandemic, with life expectancy falling 42 years from 81.9 to 77.7. Black and Indigenous Americans are living the shortest lives of any ethnic group in the U.S. 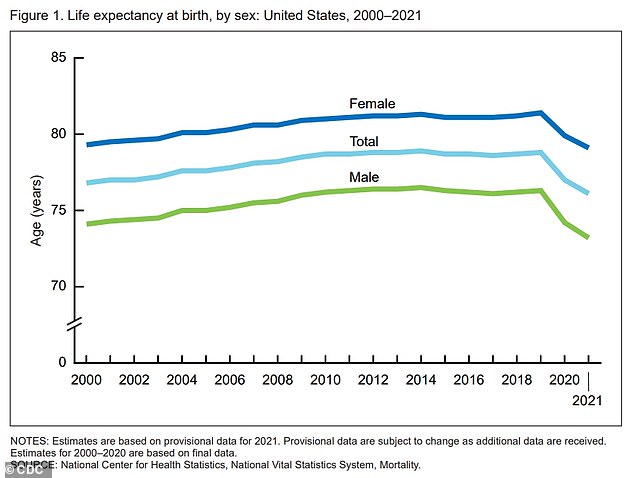 Life expectancy dropped significantly among men and women between 2019 to 2021 and the COVID-19 pandemic caused a surge in deaths. The virus was responsible for 460,000 deaths 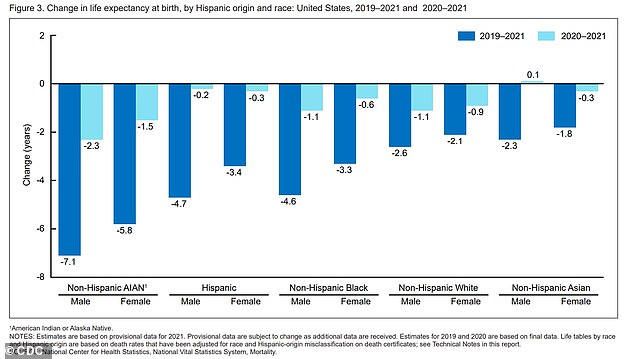 In every single ethnic group, men lost more years of life from 2019 to 2021 than women did. Asian men gained 0.1 years of life in 2021, the only such example of an increase across the two year period

The data was published Wednesday by the National Center for Health Statistics, a part of the CDC.

The numbers are provisional and could be updated in the future. Unlike previous reports, data for each individual U.S. state was not included.

The gender disparity is largest among black and Native Americans, with women in both ethnic groups living 7.7 years longer than their male counterparts on average.

Across every single one of the five ethnic groups included in the study, men lost more years of life than their female counterparts.

The biggest disparity was among Native Americans, where males lost an average of 9.4 years of life from 2019 to 2021, compared to 7.3 among women.

The gender disparity among black Americans was 1.8 years. It was 0.7 years for white people and only 0.1 for Asians.

Asian males were the only group whose life expanded from 2020 to 2021, actually increasing length of life by 0.1 years.

Covid was the main contributor to life expectancy decreases in 2021, while sharp declines in deaths related to pneumonia, respiratory disease and Alzheimer’s helped mitigate the loss of life impact

The biggest contributor to this loss of life was Covid, costing an average of 50 years of life across the population.

There were some mitigating factors, though. A sharp decrease in deaths attributed to influenza and pneumonia added nearly 39 years of life.

This may be an attribution error, though, as many deaths that could have been linked to these conditions were instead credited to Covid.

The same may have occurred for respiratory diseases, which shifted enough to add nearly 29 years of life across the population.

Despite raw Alzheimer’s deaths increasing throughout much of the pandemic, changes in 2021 added 18 years of life on average when compared to the year previous.