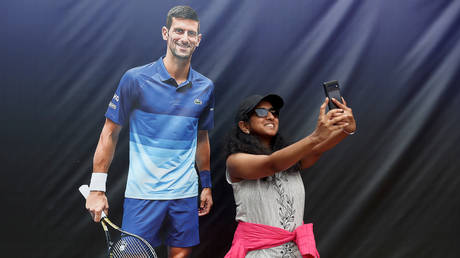 Novak Djokovic supporters gathered at the US Open in New York on Monday to protest against the Serb’s absence from the Grand Slam and demand an end to the vaccine mandate for foreign visitors to American soil.

Djokovic, 35, announced on social media last week that he would not appear at Flushing Meadows and would therefore be unable to avenge his defeat to Russian world number one Daniil Medvedev in the final last year.

Though he didn’t mention his vaccine stance specifically, writing that “sadly, I will not be able to travel to [New York] this time for the US Open,” it is his decision not be vaccinated that has seen him miss a second Grand Slam in 2022.

Earlier this year, Djokovic was also deported from Australia and prevented from defending his Australian Open crown in a row stemming from his Covid-19 vaccine status.

With the US Open getting underway on Monday, a group of protestors showed their support for the 21-time Grand Slam champion by holding up banners with messages such as: “End All Travel Mandates” and “A travel ban for unvaxxed foreigners is discrimination.”

"Why are we still closed? why is the US still closed? Where is Novak?" protester shouts at the crowds walking into the US Open today.

Protest outside US Open in Queens, NY for Novak Djokovic – "End All Travel Mandates"

Also on Monday at a press briefing, White House press secretary Karine Jean-Pierre was involved in a heated exchange with Fox News’ Peter Doocy on the matter.

Doocy asked Jean-Pierre why unvaccinated migrants are able to enter the US and stay, yet Djokovic remains sidelined from playing in the US due to his vaccine status.

“It’s not that simple,” Jean-Pierre insisted. “It’s not just that people are walking across the border. We have a plan in place.

“This is not like switching the lights on. ​T​his is going to take a process. We are fixing a broken system that was actually left by the last administration,” she claimed.

Jean-Pierre then said that she wasn’t allowed to “discuss individual visa cases due to privacy reasons,” with the US government also “not commenting on medical information of individual travelers.”

“They’re two different things,” Jean-Pierre also responded, when Doocy said that “thousands of people are walking into” the US every day.

Doocy: "Somebody unvaccinated comes over on a plane, you say that's not okay. Somebody walks into Texas or Arizona unvaccinated, they're allowed to stay?"

Jean-Pierre: "That's not how it works… It's not like someone walks over."

“Some of them turn themselves over, some of them – tens of thousands a week are not,” he added, which pushed Jean-Pierre to list measures that the Biden administration has supposedly implemented to try and curb illegal immigration.

“And as it relates to the tennis star, that’s totally different,” Jean-Pierre claimed. “That’s a different process. That is the US Open that he’s a part of. And there are CDC [Centers for Disease Control and Prevention], federal guidances that he needs to follow.”

Without Djokovic present, the US Open heads into its second round on Wednesday.

[ad_1] Marcin Nowak said it is 'not possible' to host athletes from Russia and Belarus at the event next year...

[ad_1] Magomed-Shapi Suleymanov will not feature for Israeli team Hapoel Be'er Sheva in their game against Lech Poznan Footballer Magomed-Shapi...

[ad_1] Russian grandmaster Sergey Karjakin has vowed not to “hide behind the chessboard” if he is called upon for his country’s military operation...

[ad_1] Manchester United head coach Erik ten Hag claimed that he left Cristiano Ronaldo on the bench in a 6-3...