Perfection, down to a tea: The Royal Family’s private Fabergé collection goes on display in Buckingham Palace

It’s a tea set fit for a queen – although it’s unlikely to help quench her thirst.

This stunning collection of intricate works of art by Russian jeweller and goldsmith Peter Carl Fabergé is what the Royal family has amassed over more than a century.

The works were unveiled – some of them publicly for the first time – as part of an exhibition at Buckingham Palace’s summer opening. 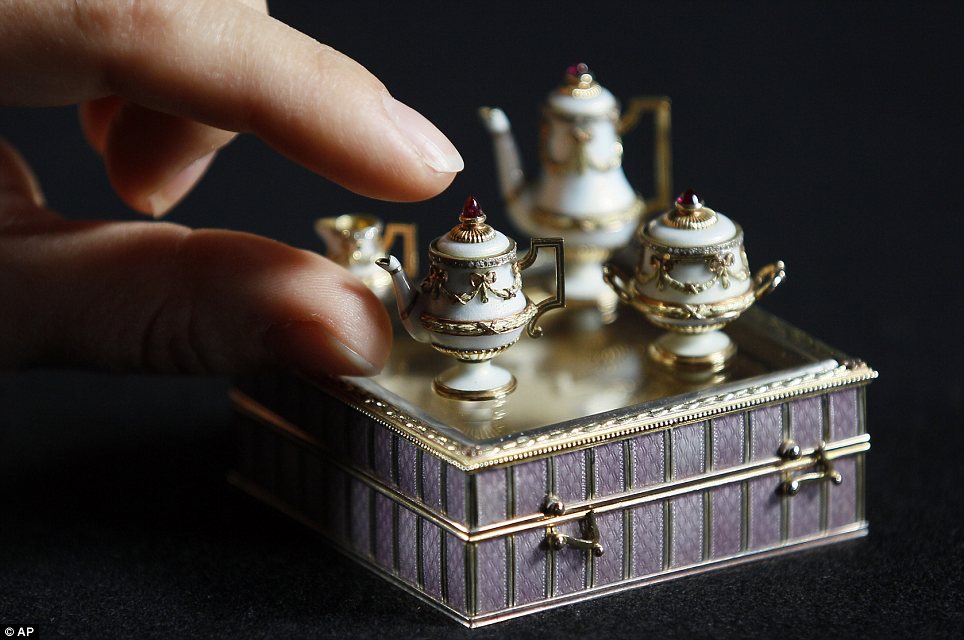 Intricate: A miniature Fabergé tea set that is among more than 100 items collected by the Royals since the reign of Queen Victoria goes on display at Buckingham Palace 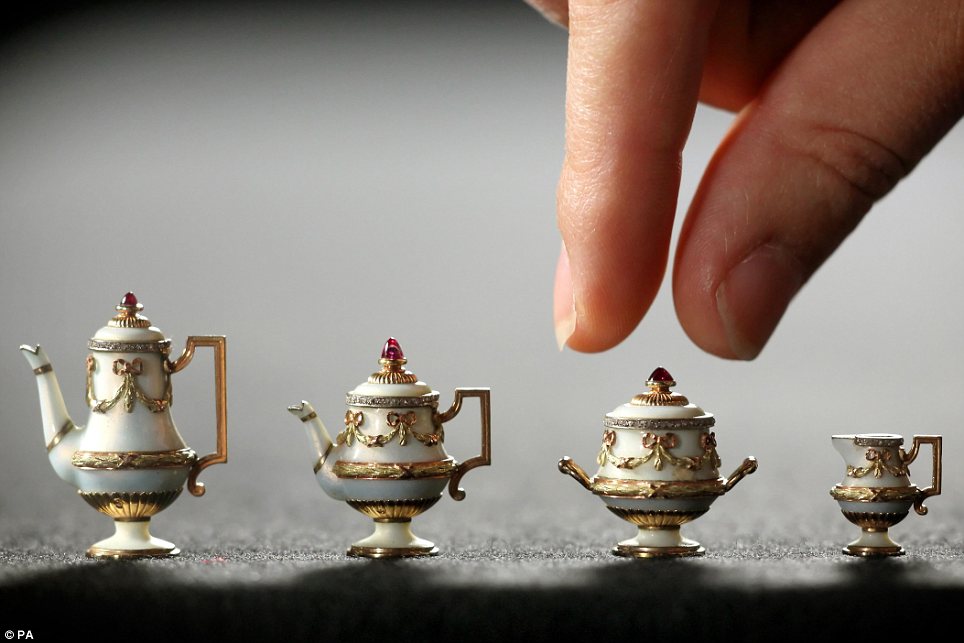 Tea anyone? A curator from the Royal Collection examines a miniature tea set measuring just 1cm in height which was originally owned by Queen Alexandra of Denmark

The Royal Fabergé collection includes more than 100 items from the celebrated artist who was first collected by Queen Victoria in the late 19th century.

Sine then, six generations of Royals including Her Majesty The Queen and Prince Charles have been fascinated by the priceless baubles.

Among the collection is an Imperial Easter egg with an ornate basket of flowers that was commissioned by Tsar Nicholas II for Tsarina Alexandra Feodorovna in 1901. 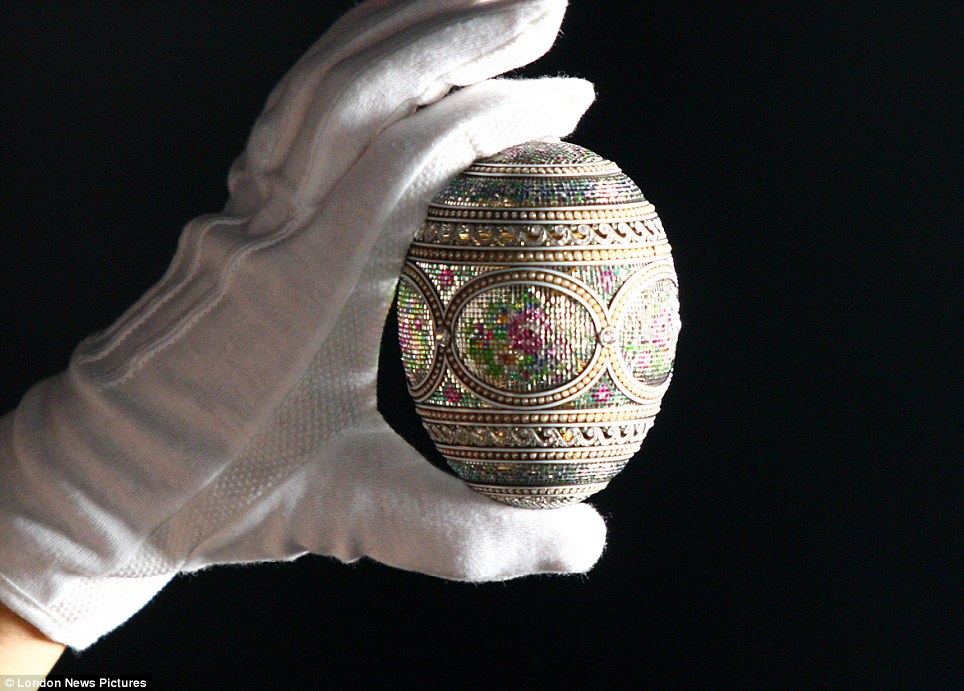 Glitter ball: A specialist handles a mosaic egg which forms part of a display at the Summer Opening of Buckingham Palace where over 100 Faberge pieces will be exhibited 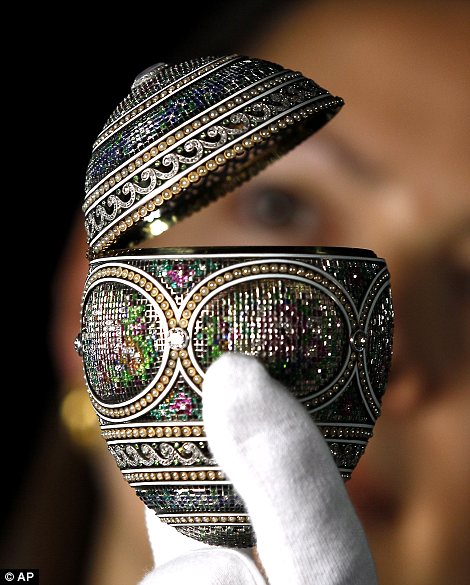 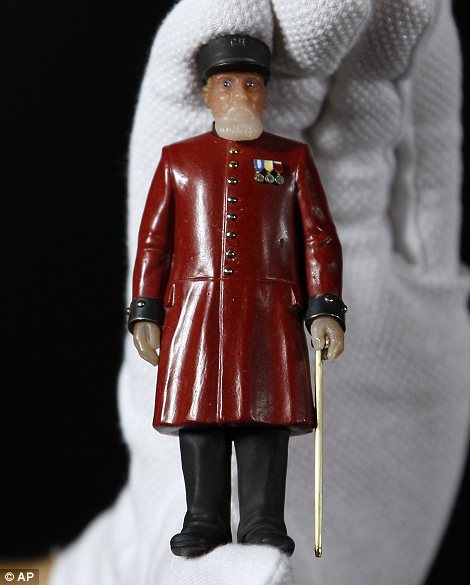 Easter surprise: The famous mosaic Fabergé egg with its tiny cut emeralds, rubies and diamonds, and right, a miniature Fabergé figure of a Chelsea Pensioner which also forms part of the display

The famous Mosaic Imperial Easter Egg is made from tiny cut emeralds, rubies and diamonds with  portraits of the five children of Tsar Nicholas II and Tsarina Alexandra.

The Egg was a gift from the Tsar to his wife in 1914 and was confiscated during the Russian Revolution before being purchased by King George V in 1933, probably for Queen Mary’s birthday.

Also going on display are a miniature gold tea set that originally belonged to Queen Alexandra and the only known Fabergé figure of a Chelsea Pensioner, acquired by King Edward VII in 1909. 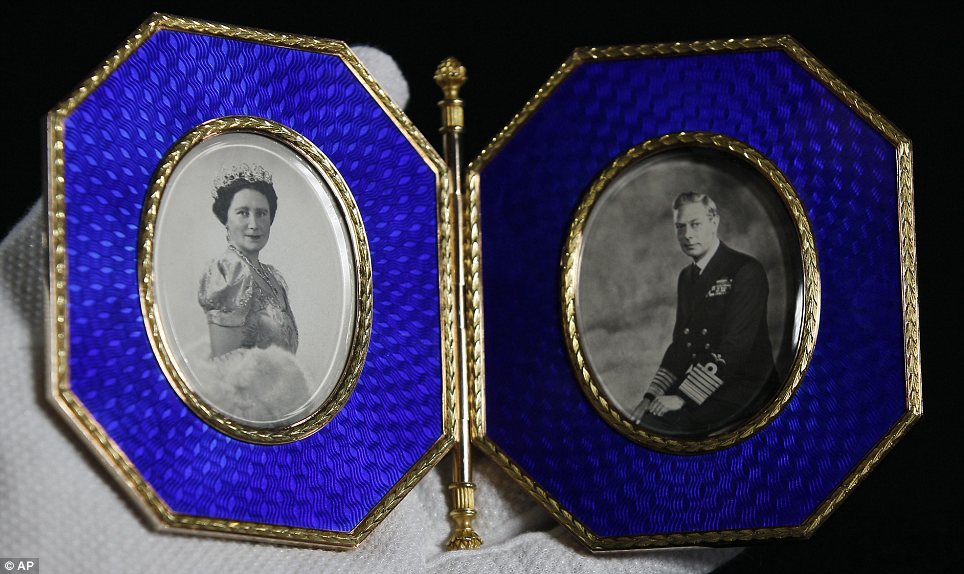 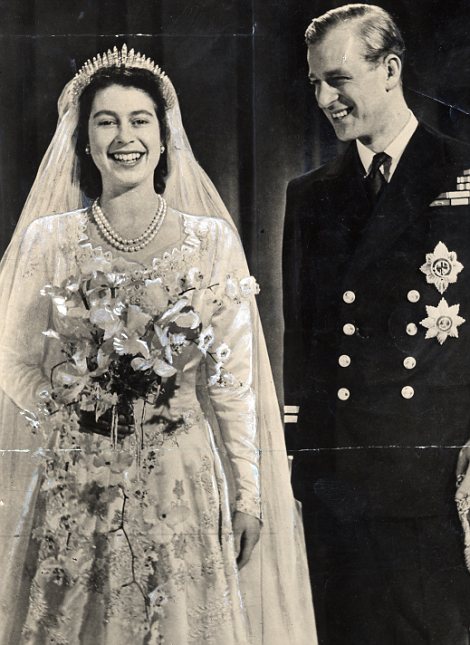 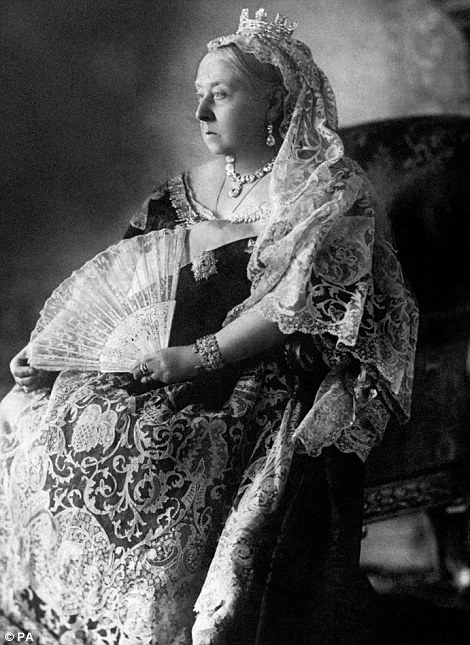 Royal approval: A crystal Fabergé inkwell was presented to The Queen (then Princess Elizabeth) and The Duke of Edinburgh on the occasion of their wedding in November 1947 (left) and Queen Victoria used a red and white Fabergé notebook to sign autographs for foreign rulers who attended her diamond jubilee (right)

The summer opening also includes a display of the Duchess of Cambridge’s wedding dress.

One of the most striking items is a red and white enamelled notebook that Queen Victoria used for autographs for foreign rulers who attended her diamond jubilee.

Among the exhibition highlights is a crystal inkwell presented to The Queen (then Princess Elizabeth) and The Duke of Edinburgh on the occasion of their wedding in November 1947.

Fabergé produced a diverse range of works, often turning the most routine object into a miniature work of art.  The vast majority of his designs were never repeated and most pieces were made entirely by hand. 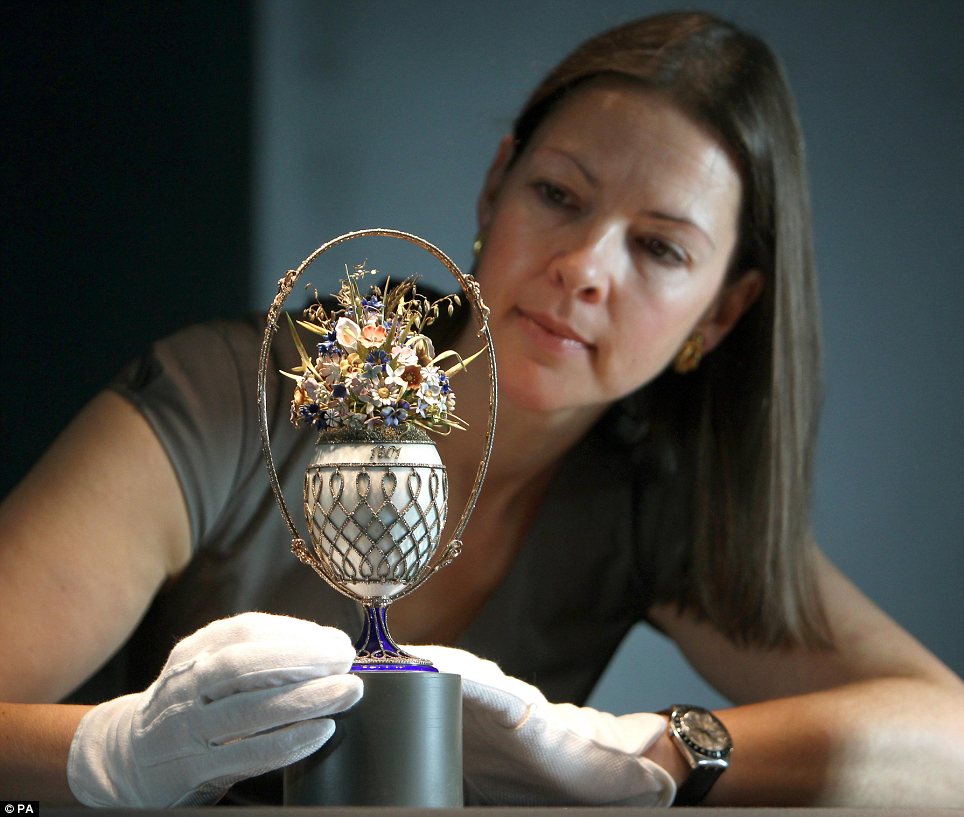 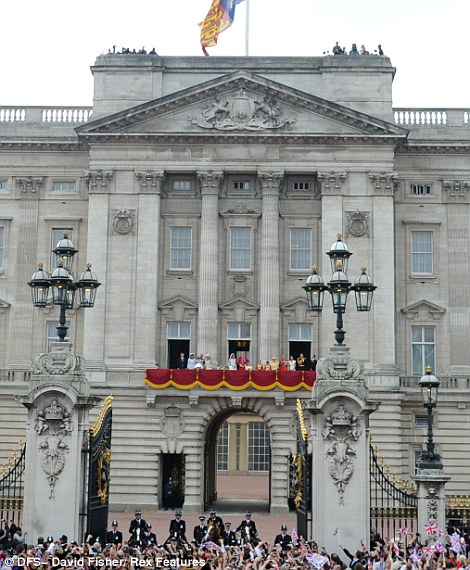 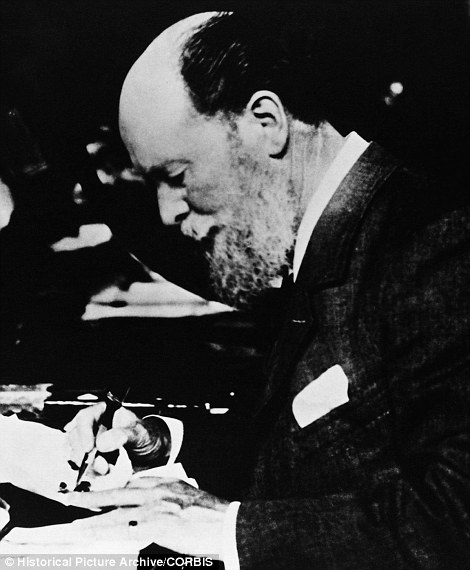 Left: The Royal Fabergé collection will be displayed during Buckingham Palace’s Summer Opening from July 23 to October 3, which allows visitors to view the nineteen state rooms while The Queen makes her annual visit to Scotland Right: Peter Carl Fabergé  was a Russian jeweller of Baltic German-Danish and French origin, best known for the famous Fabergé eggs, made in the style of genuine Easter eggs

The success of Fabergé’s business was inextricably linked to the patronage of the Romanov Dynasty and the close ties between the British, Danish and Russian royal families.

The Danish Princess Alexandra married the future King Edward VII in 1863, and her sister Dagmar became Tsarina Maria Feodorovna after her marriage to Tsar Alexander III in 1866.

There was a constant exchange of gifts for birthdays, anniversaries, and to commemorate occasions when the families met – many of the objects on display are therefore intimately connected to the royal families.

Royal Fabergé is part of a visit to the Summer Opening of the State Rooms at Buckingham Palace, 23 July – 3 October 2011.

Next post American vs Delta vs United: Travel experts compare their business class cabins on flights to NYC

[ad_1] Paramedic who boasted on Facebook that he 'saved someone's life and managed to cop a feel of some cracking...