Greece is the word… for hordes of tourists! Photos reveal the reality of a peak-season holiday in one of the world’s most popular destinations

Greece was the ninth most-booked country on the planet for UK travellers in July and August 2022 and the third most-booked country worldwide, according to Skyscanner – and the Greek tourist board revealed that in the first week of August alone, one million holidaymakers arrived at airports in the country.

But what does this data mean for someone travelling to the country in peak season? These shocking photos – which I took on a jaunt to Greece earlier this month and are shown next to brochure-style images for contrast – reveal that it can mean standing elbow to elbow with other visitors at major tourist sights and struggling to find any kind of reasonably-sized slice of sand on the beach. Unless you get up very early.

Or unless, like Boris Johnson, who holidayed on the Greek island Evia recently, you have a security team to clear the way. 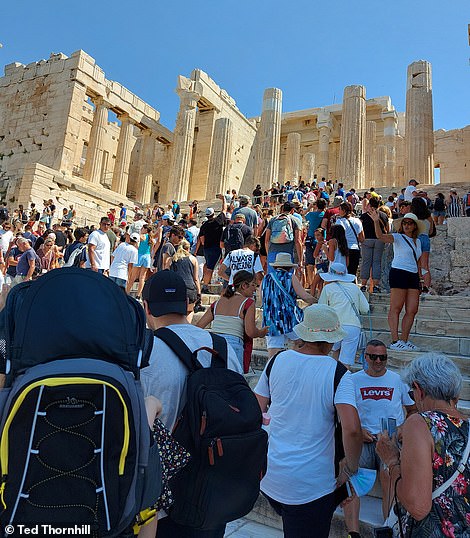 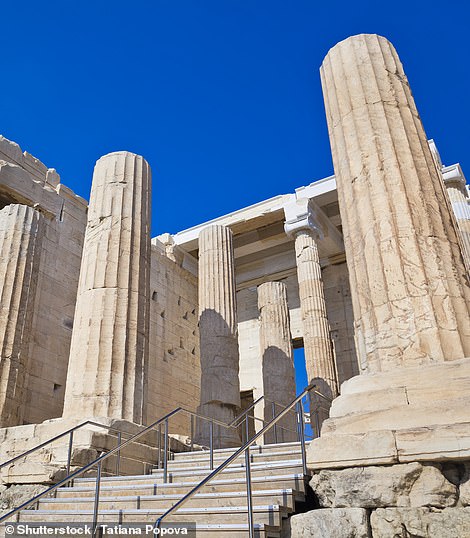 LEFT: Ted Thornhill took this picture of the entrance to the Acropolis at the Temple of Athena Nike during his visit to the site earlier in August. RIGHT: How the entrance would look if you got there early – or visited off-season 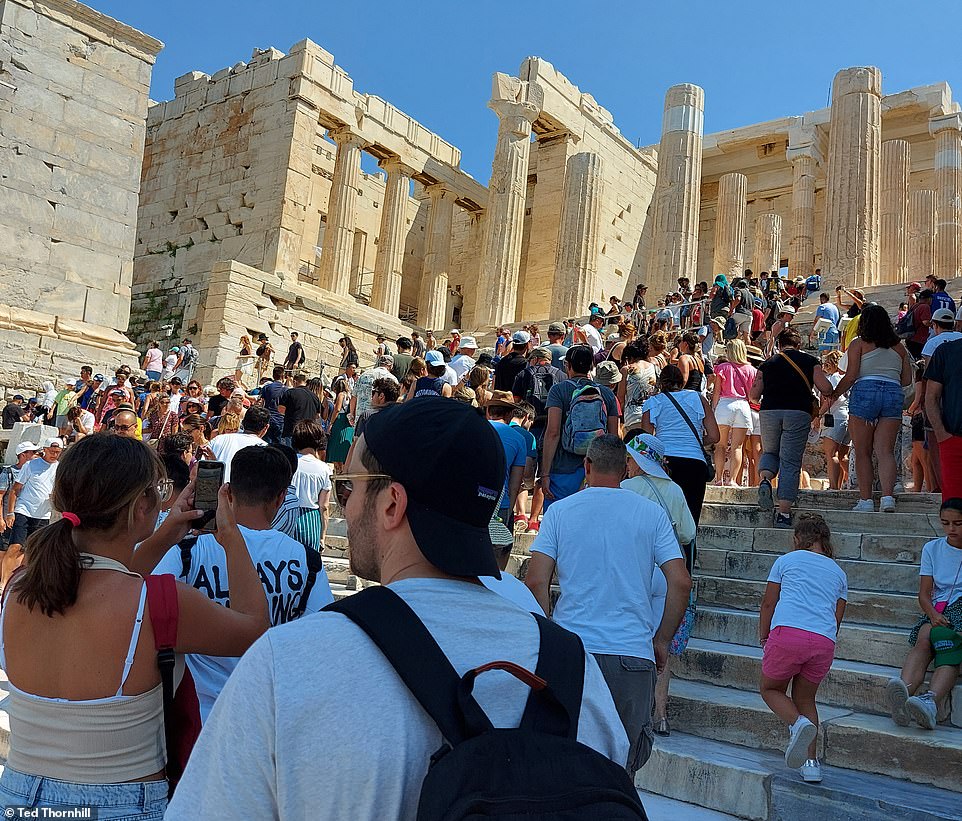 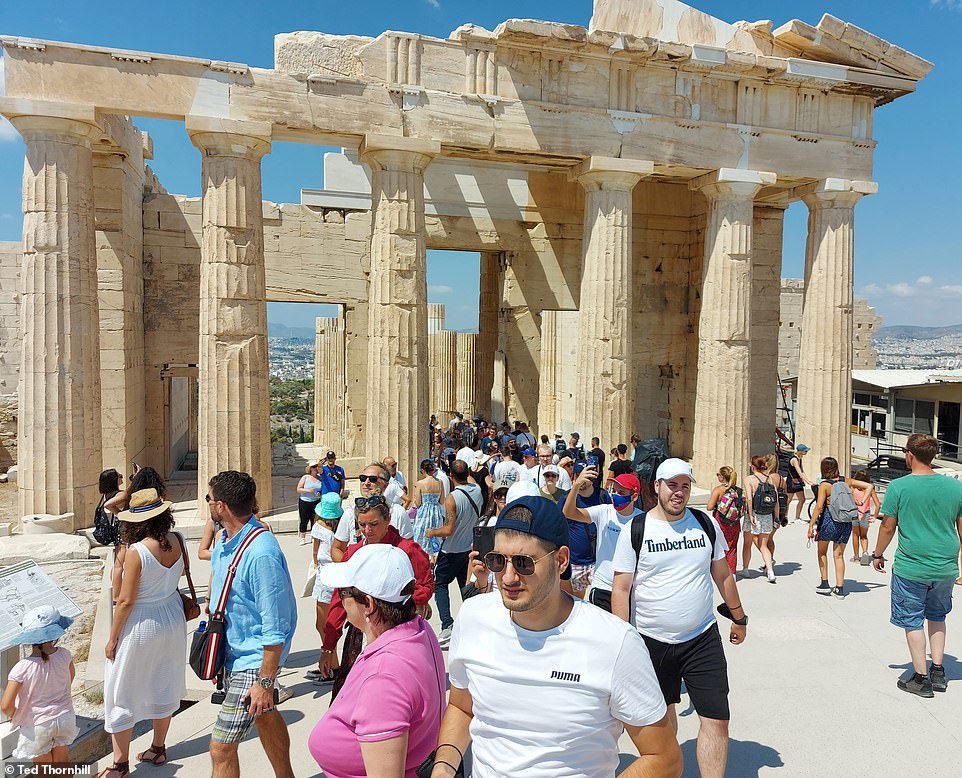 A set of photographs I took at the Acropolis – which 16,000 people visit every day – show hordes of tourists swarming over the revered sight.

I got there with my family at around midday – in baking heat – and we had to queue to make our way through the majestic entrance by the Temple of Athena Nike.

We were jammed into a bottleneck as staff members yelled at visitors to stop hugging the marble pillars. 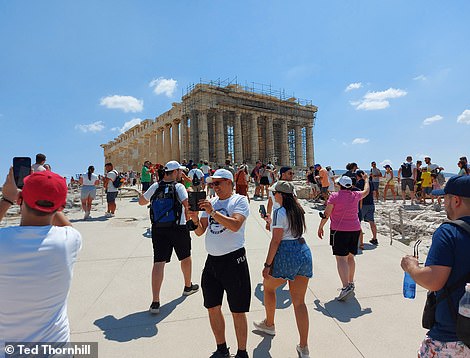 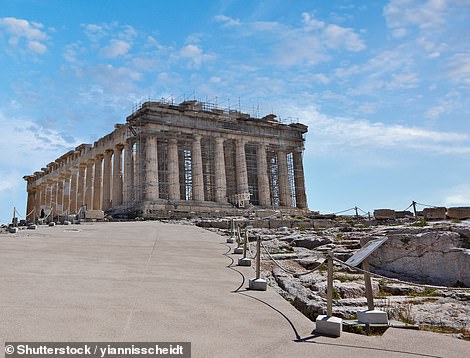 Ted searches for a spot to take a ‘clean’ image of the iconic Parthenon. On the right is a brochure-style picture of the structure 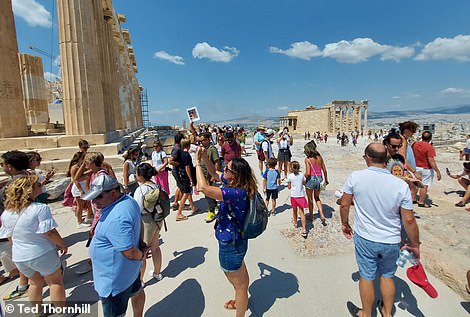 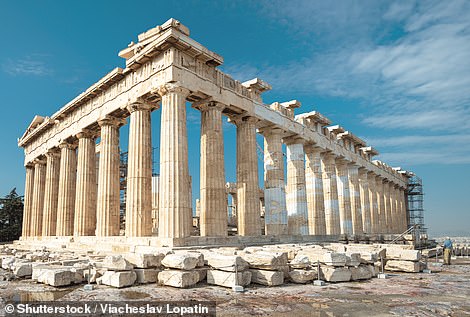 Ted says that it felt like half of Athens was at the Acropolis with him (left). The picture on the right shows the majesty of the Parthenon untainted by tourists 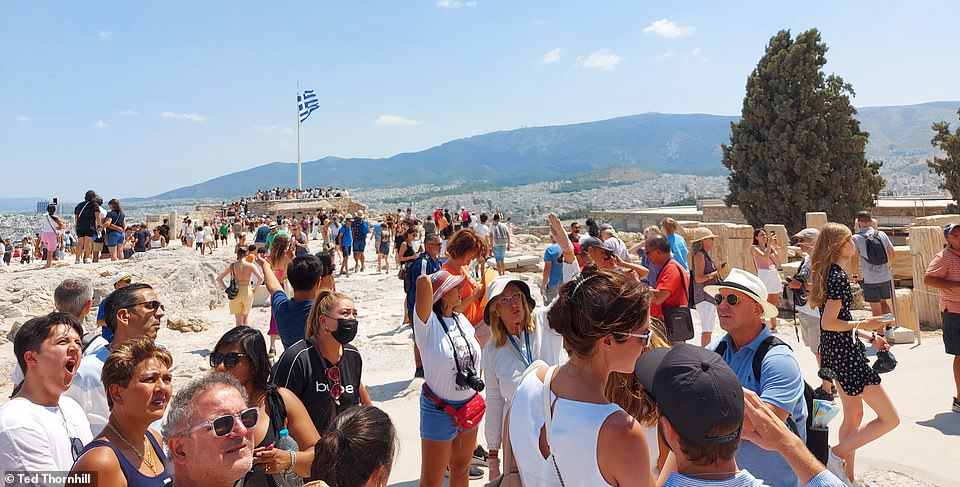 Once we reached the top, we wove in and out of throngs of tourists, desperately searching for a ‘clean’ image of the iconic Parthenon.

It felt as if half the city was doing the same thing.

We had visited Corfu a few days earlier, with popular spots also heaving with visitors. 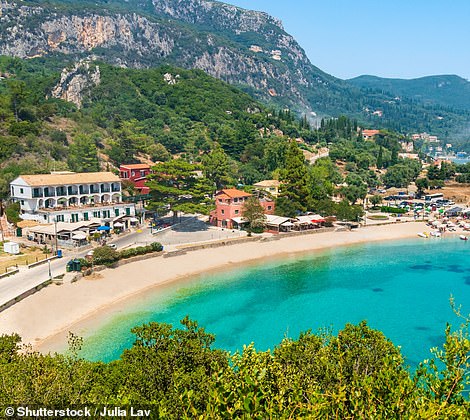 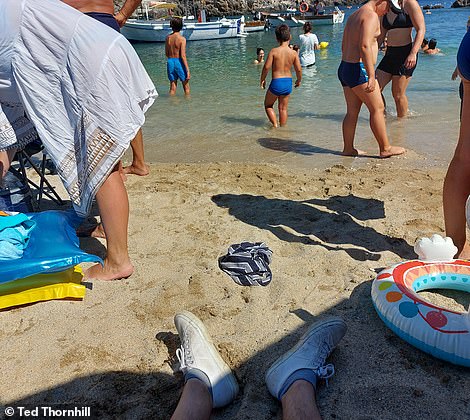 Agios Spiridon Beach (brochure-style picture on the left) is one of the finest in north-west Corfu, but Ted (his legs pictured right), could only just squeeze onto it 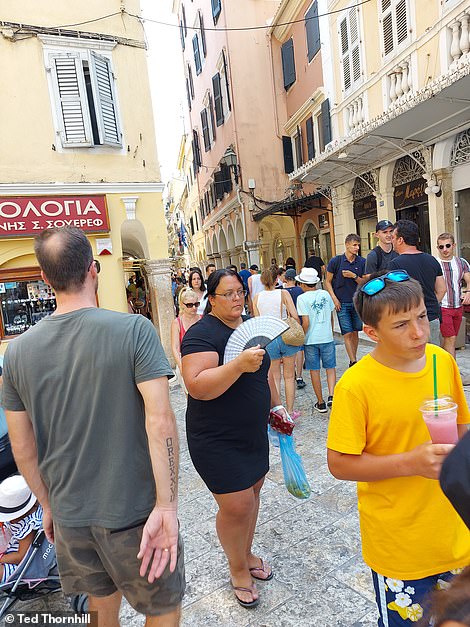 Ted said that he enjoyed the delights of Unesco-listed Corfu Town, but it was jammed with other tourists (above), despite the mercury hitting 38C 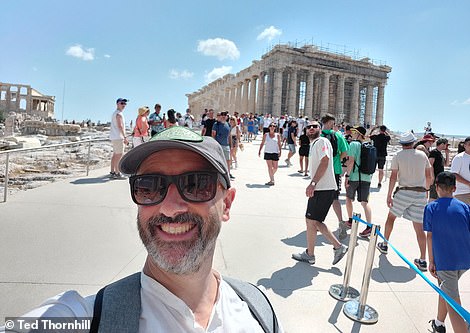 Ted finds a moment for a selfie at the Acropolis

We had a wonderful time exploring the lanes and alleyways of Unesco-listed Corfu Town, but some of them were jammed with other tourists, despite the mercury hitting 38C.

And one of the north-west coast’s best beaches – Agios Spiridon – was a writhing mass of bodies.

We escaped by taking a boat tour of the local sea caves.

Between July 1 and August 23, there were 8,350 scheduled flight departures from the UK to Greece, according to Cirium.

I’m glad we were on one of them – but next time, we’ll be packing multiple alarm clocks…

Next post How Gen Z is fuelling the fast fashion crisis: Nine in 10 young Brits still opt for cheap clothing