Kentucky and West Virginia have the most smokers per capita out of any state in America, data from the Centers for Disease Control and Prevention (CDC) shows — likely thanks to their history of tobacco plantations leading them to be slow to restrict smoking — while western states like California and Utah recorded the lowest rates.

The official report interviewed more than 400,000 adults from all 50 U.S. states to estimate the proportion of residents that smoked at least once a week in 2020, the year of latest available data. They found the two southern states topped the list with more than one in five adults saying they were current smokers.

Experts suggested a history of tobacco plantations led them to be slow to push through anti-smoking legislation compared to their northern neighbors. Both only raised the minimum smoking age to 21 years two years ago, and they tend to have lower smoking taxes and fewer restrictions on where people can smoke.

At the other end of the scale Utah and California had the least smokers per member of the population, with California owing its position to being one of the first to start outlawing smoking in most workplaces and all indoor public spaces in 1995. Utah is an outlier with its low rate driven by the large Mormon community, which prohibits smoking alongside alcohol and coffee due to the risks of addiction.

About one in 10 Americans — or 30 million people — smoke, according to official figures. But it is the leading cause of preventable deaths in the U.S., triggering illnesses including cancer and lung disease that lead to about 480,000 fatalities every year. 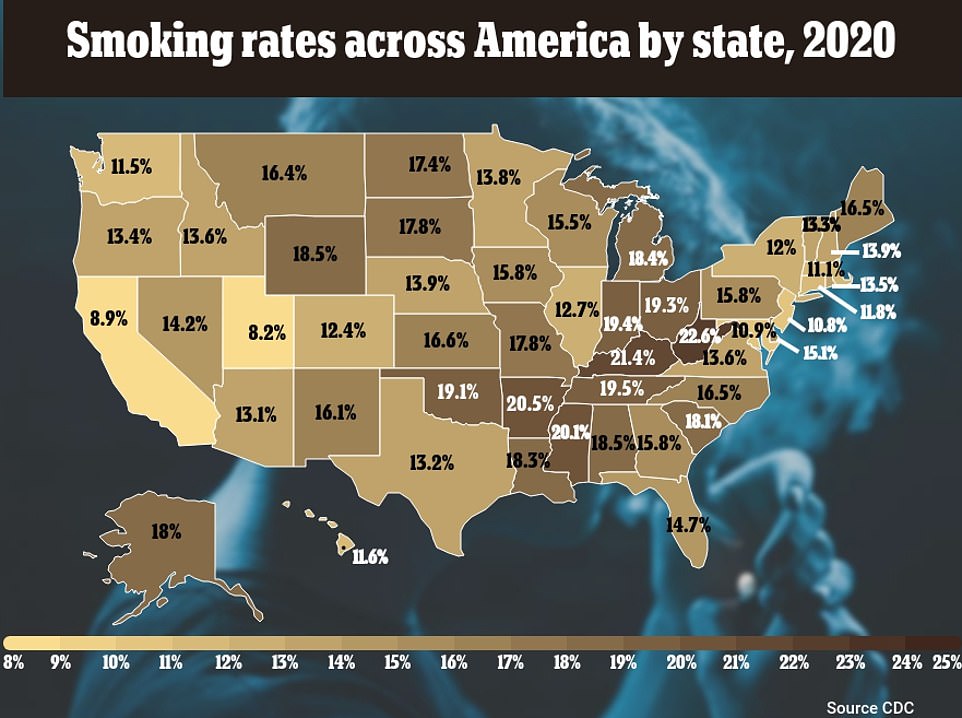 The above map shows the proportion of people who smoked at least once a week in each of America’s 50 states in the year 2020, the latest available. It is based on the annual report from the Centers for Disease Control and Prevention (CDC) which interviews about 400,000 people. West Virginia and Kentucky had the highest smoking rates, while Utah and California had the lowest

Source: From the CDC’s Behavioral Risk Factor Surveillance System for the year 2020

Source: From the CDC’s Behavioral Risk Factor Surveillance System for the year 2020

The CDC report uses data based on the Behavioral Risk Factor Surveillance System (BRFSS) survey for 2020, it is the most recently available data.

It defined a ‘current smoker’ as someone who had at least 100 cigarettes in their lifetime and smoked on at least some days during the year.

West Virginia was found to have the most smokers in the country, with 22.6 percent admitting they were current smokers. Kentucky had the second most (21.4 percent), followed by Arkansas (20.5 percent) and Mississippi (20.1).

Timeline of tobacco control in America

1966: Health warnings appear on American cigarette packets for the first time, after this is legislated for by Congress.

1984: Nicotine gum is approved as the first drug designed to help people quit smoking. Approval was granted by the Food and Drug Administration.

1987: Aspen in Colorado becomes the first area to ban smoking in restaurants, amid signs states are preparing to outlaw the habit in certain settings.

1998: California becomes the first state in the nation to eliminate smoking in bars.

2010: Marketing restrictions on tobacco products come into effect, and cigarette companies are prohibited from using ‘light’, ‘low’ and other words deemed misleading.

2012: The CDC launches America’s first ever campaign encouraging people to give up smoking.

2019: Trump signs bill raising the legal age for smoking to 21 years old across the entire country.

Dr Jonathan Foulds, a public health expert at Penn State University, wrote in an email DailyMail.com that states owed their rates to ‘socio-political backgrounds’ — such as whether they hosted tobacco plantations or the make-up of the local population.

‘Tobacco-growing states often have among the weakest tobacco control legislation (due to the influence of the industry on state legislators),’ he said.

‘Kentucky would be an example of this.

‘[But] some states have a longer history of passing strong state-specific tobacco control legislation (e.g. high cigarette taxes and strong laws preventing smoking in public places) whereas others do not.

‘California and Massachusetts were early adopters of such policies and others have more recently done so like New York and New Jersey, resulting in lower smoking rates.’

He added that states have also benefitted from an influx of immigrant groups — such as Hispanics — with a traditionally low prevalence of smoking.

Some have larger older populations, which smoke less, while others like Colorado had people moving to them specifically for an ‘outdoorsy, healthy’ lifestyle.

Kentucky had no minimum age for starting smoking until 1990, while some states were raising it to as high as 19 years old.

West Virginia had a minimum age of 18 years before 1990. Both states — along with the rest of America — only raised the minimum age to 21 years after President Trump legislated the change in late 2019.

They also have historically lower taxes on cigarettes than others. Kentucky is currently charging about $1.10 per 20 cigarettes in tax, while West Virginia is billing $1.20. This is far off the biggest taxers including Oregon where the rate is $3.33 — and below the national average of about $1.80 per pack.

Data also shows that Kentucky remains the second largest tobacco producer in America, and was behind about 120,000 pounds sold last year. Initially Kentucky and West Virginia were both major exporters of tobacco to Europe.

The above map shows e-cigarette use by state in 2017, from the Behavioral Risk Factor Surveillance System. This is the latest data available from the research

North Carolina is America’s leading tobacco producer with more than 350,000 pounds sold, but it is only 20th in rankings for smoking states — at 16.5 percent of inhabitants. Successful campaigns are partially behind its faster drop off in smoking than in other regions.

For comparison, California has been leading the pack when it comes to pushing its residents to use fewer and fewer cigarettes.

In 1995, it became the first in the country to ban smoking in nearly every workplace and for all indoor public spaces. It remains in place today and is one of the most restrictive in the nation. It also does not have a history of tobacco production.

The report did not look at e-cigarette use rates among states. But data from the CDC published in 2017 suggested states with the highest smoking rates also had the highest usage rates for the electric devices.

Oklahoma had the highest use among adults (7.1 percent), followed by Kentucky (6.1 percent) and Indiana (six percent). At the other end of the scale was California and Vermont (both three percent) with the lowest rates with Connecticut second (3.2 percent).

The NiceRx report also looked at data on fatality rates from smoking per 100,000 people by state that had been published back in 2014 by the CDC.

West Virginia and Kentucky were also found to be reporting the most deaths due to cigarettes at 241 and 197 fatalites per 100,000 people. At the other end of the scale was Utah (39) and Alaska (82).

Cigarette smoking is the leading cause of preventable death and disability in the United States, the CDC says.

It estimates 16million Americans have at least one illness from the habit, costing a total of $170billion in medical bills every year.

Next post How to make movies without a huge carbon footprint

[ad_1] Why unrealistic Instagram images of superfit new mums could encourage baby bluesFitness guru Chloe Madeley has been praised for...

[ad_1] The NHS will recruit more than 1,000 'GP assistants' so family doctors have more time to treat patients this...