One-man show crowded with a cast from Dickens 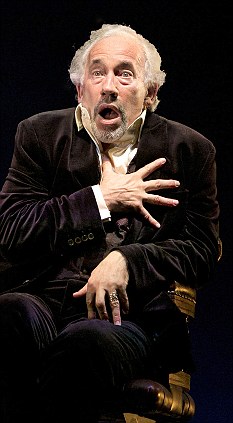 You’ve probably forgotten, what with the Olympics and all, that 2012 also marks the bicentenary of Charles Dickens’s birth. It’s a fine excuse for Simon Callow to reprise Peter Ackroyd’s The Mystery Of Charles Dickens.

This one-man show is less a play than a living biography. As Dickens’s heartfelt experience of poverty and working in a  rat-infested factory leaks into his writing, Callow slips from being the author into one of  his many brilliantly conceived characters.

As a child, Dickens loved nothing more than playing with his toy theatre. Indeed, he was really an actor manqué. As soon as he became a successful writer, he took to declaiming his work across England and America. These were extraordinarily energetic performances, after which an exhausted Dickens had to change his sweat-soaked clothes and couldn’t speak for an hour.

The deliciously fruity Callow is in his element here. As both Bill Sykes and his murder victim Nancy, from Oliver Twist, he seizes upon every subtlety but also every chance to over-act with great gusto, and truly becomes them.

One of the mysteries that Ackroyd prods at is what he calls Dickens’s ‘odd’ relationship with women. He mercilessly humiliated the sweet mother of his ten children, set up 18-year-old actress Nelly Ternan as his mistress and yet established refuges for prostitutes. In Miss Havisham in Great Expectations, he gave us a devastating portrayal of a woman mired in misery by a marriage that never happened.

Anyone who has read Claire Tomalin’s great biography will learn little new here, but Ackroyd and Callow together capture the essence of a man who was  a force of nature, who kept himself going by taking on much too much and killed himself in the process. In Callow, he lives on.