Climate change is triggering early spring across North America and prematurely waking bumblebees from hibernation before flowers have bloomed – leaving many without food and threatening their survival, a new study has found.

These insects typically time the end of their hibernation for when flowers are in bloom, allowing them to find an adequate amount of food to replenish what they missed over the winter, but the study found they are waking six to 35 days earlier than ever before.

Researchers from the University of Ottawa found climate change is disturbing the slumber of 15 of the 21 bumblebee species across the continent.

Lead author Olga Koppel warns that the survival of these insects is in humanity’s best interests, as they pollinate agricultural crops that millions of people rely on as a source of food. 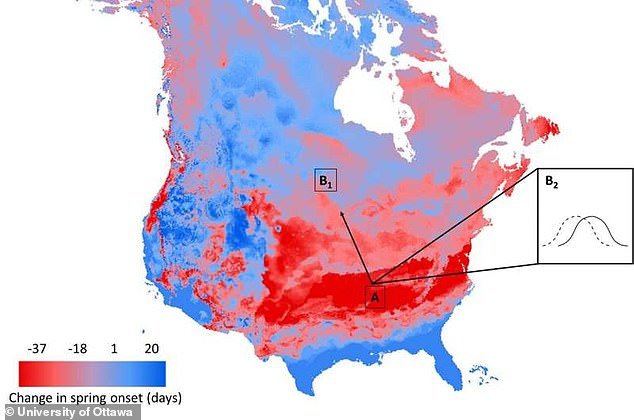 Bumblebees sync the end of their hibernation for when flowers are in bloom, but the study found they are waking six to 35 days earlier than ever before. The red areas are where these insects are waking earlier

‘The over 40 bumblebee species that are native to North America provide this invaluable economic service,’ Koppel continued.

The study, published in Science Direct, notes that climate change is causing a decline in global diversity and bee pollination ‘services have already had significant economic implications and cascading biodiversity consequences.’

The team analyzed shifting patterns among bumblebees in the US and Canada.

They looked at a total of 21 species, resulting in six found in the US and 11 in Canada that are showing ‘strong phenology shifts.’ 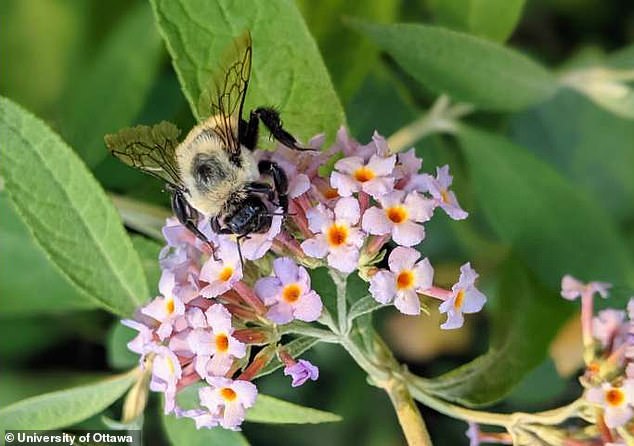 ‘This research has demonstrated that bumblebee emergence timing can be biased heavily in the direction of climate changes, which has implications for similar research on other species, as well as for the urgent conservation of these valuable pollinator species,’ said Koppel.

‘This study provides a roadmap for evaluating large-scale temporal responses to climate change for many insects and other animals.’

A separate study about climate change impacting bees from last week found it is causing them to develop asymmetrical wings.

The discovery is based on an analysis of bumblebee specimens housed in museums across the UK.

High asymmetry (very differently shaped right and left wings) indicates the bees experienced stress during development – most likely caused by an external factor that affected their normal growth, such as the weather.

A study of four separate bumblebee species showed that each displayed more stress as the century progressed, from its lowest point around 1925.

Further analysis showed that each species displayed a consistently higher proxy of stress in the latter half of the century.

When assessing the climate conditions during the year of collection, the team found that bees’ wings were more lopsided in hotter and wetter years.

Lead author Aoife Cantwell-Jones, from Imperial College London, said in a statement: ‘By using a proxy of stress visible on the bee’s external anatomy and caused by stress during development just days or weeks before, we can look to more accurately track factors placing populations under pressure through historic space and time.’

In Britain, a third of wild bees are in decline. If current trends continue, certain species will be lost altogether. They pollinate flowering crops, such as rapeseed.

Bumblebees CAN feel pain: Study shows insects can suppress their withdrawal reflexes in exchange for a sweet treat

While the idea of getting stung isn’t exactly appealing, a new study may have you thinking twice before swatting away any pesky bees.

Researchers from Queen Mary University of London have revealed that bumblebees can feel pain.

In the study, the team showed that bumblebees can modify their response to ‘noxious’ (painful) stimuli in a similar way to other animals that are known to feel pain.

‘If insects can feel pain, humans have an ethical obligation not to cause them unnecessary suffering,’ said Matilda Gibbons, first author of the study.

‘But the UK’s animal welfare laws don’t protect insects – our study shows that perhaps they should.’