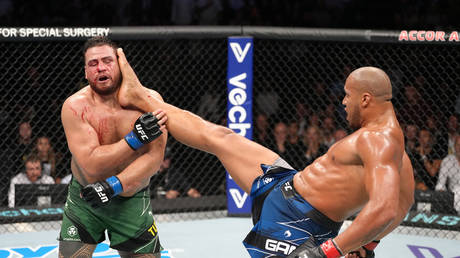 The thousands of fans packed into Paris’ Accor Arena were certainly sent home happy after hometown hero Ciryl Gane served up a sensational knockout to cap the UFC’s debut event in the French capital on Saturday night.

Gane, who was rebounding from the first loss of his mixed martial arts career in last year’s heavyweight title tussle with Francis Ngannou, displayed a superbly technical striking against Australia’s tough as teak destroyer Tai Tuivasa, who was coming into the fight on the back of five successive finishes which had vaulted him towards the summit of the rankings.

For all of Tuivasa’s attrition, it wasn’t enough to overcome Gane’s supremely technical striking game as he landed at will throughout the majority of the main event fight, eventually finishing the Aussie with a flurry of punches late in the third round after having hurt Tuivasa with several thunderous shots to his midsection.

The finish was a decisive one, but that isn’t to say that France native Gane had it all his own way in front of an adoring crowd in Paris.

Tuivasa had Gane badly hurt in the second round when he sent the giant heavyweight cascading to the canvas after connecting flush with a devastating strike, but the affable Australian fighter couldn’t capitalize on what was his most effective moment in the fight.

Indeed, Gane rebounded just moments later to put some heat of his own on Tuivasa, landing a sequence of body strikes which visibly hurt his foe, and eventually opened the door to the sequence which would finish the fight in the third frame.

Tuivasa was more than game, even appearing to win over the partisan crowd due to his never-say-die approach to the fight as he continued to push forward in a bid to land the type of concussive strike for which he has become known in the UFC.

Ultimately, Gane’s impressive footwork kept him (mostly) out of danger and allowed him to take advantage of Tuivasa’s blitzes – such as with the devastating counter to an on-rushing Tuivasa which prompted referee Marc Goddard to wave off the hugely entertaining fight before we could witness a fourth round.

“Honestly Tai hit me so hard, he knocked me out,” Gane said after the fight of the shot that dropped him.

“He put the lights out, I fell down, but I had to be a warrior. I got up and that’s what I did. I came back even stronger and I got the win.”

The Frenchman appears to easily be the most technical striker in the UFC heavyweight fame, and afterwards called for a rematch with the one man who has triumphed over him so far in this near-perfect combat sports career across both mixed martial arts and Muay Thai: champion Francis Ngannou.

Ngannou, who was cageside, certainly heard that loud and clear.

Next post 28-year-old woman who is ‘allergic to GRAVITY’

[ad_1] Reports have claimed that Ukraine is planning a joint bid with Spain and Portugal for the football tournament Ukraine’s...

[ad_1] Several large cities will not have fan zones or show World Cup matches on giant screens A number of...

[ad_1] Russian figure skater Alexandra Trusova has triggered debate in her homeland after it was revealed she is changing her...