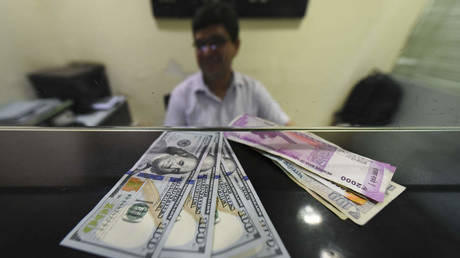 India’s currency, the rupee, slumped to a record low on Monday after US Federal Reserve Chair Jerome Powell articulated a firm commitment to battling inflation in a speech at an annual central bankers’ conference.

Powell’s speech on Friday in Jackson Hole signaled that the Fed’s restrictive policy would be kept for longer in order to bring down raging inflation. He added that reducing price growth would likely require a sustained period of below-trend growth.

The rupee had hit a previous all-time low of 80.06 in July. The US dollar is up over 7% against the Indian currency so far this year.

Other Asian currencies also weakened against the greenback in the wake of the Fed chairman’s speech. The South Korean won dropped 1.3%, Thai baht declined by 0.8%, Japanese yen lost 0.64%, Chinese yuan and Taiwan dollar both fell by 0.6%, Malaysian ringgit plunged by 0.5%, while the Indonesian rupiah and the Singapore dollar slumped 0.43% and 0.34%, respectively.

Meanwhile, the dollar index, which gauges the greenback’s strength against a basket of six major currencies, was trading 0.51% higher on Monday.