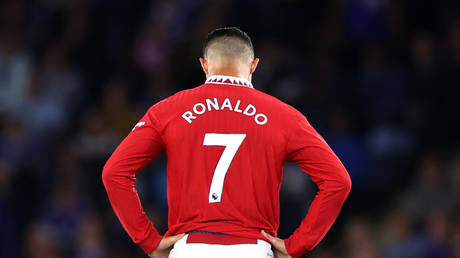 Manchester United boss Erik ten Hag has told Cristiano Ronaldo that he must adapt to the Dutchman’s style of play if he is to win his place back in the first team lineup.

Ronaldo, 37, has been absent from the Ten Hag’s starting lineup for the past three Premier League games, and likely a fourth unless he is selected for Sunday’s clash with rivals Arsenal at Old Trafford, amid concerns that the wantaway Portuguese superstar’s style of play doesn’t mesh well with that of the new regime.

It is the longest spell that Ronaldo has spent on the substitutes’ bench dating back more than 15 years, while he has also earned another unwanted record by not scoring in his side’s opening five games of the season – an unwanted statistic dating back to the early days of his first spell with the club in the mid-2000’s.

United have won the three Premier League games in which Ronaldo has not been selected by Ten Hag, suggesting that the Dutch head coach has settled on a first XI which does not feature the multiple-time Ballon d’Or winner.

And until he falls in line with the new way of doing things in the red half of Manchester, Ten Hag hints that Ronaldo will remain a peripheral figure.

“I will be his friend. Sometimes I will be his teacher. It depends on the situation,” Ten Hag said of his star pupil.

“As we all know, he didn’t have the pre-season and you can not miss the pre-season. Especially the game we play, the way of play is not the type in comparison with last year.

“It depends, (and) demands, co-operation and demands certain positioning, in and out of possession. And the other thing is the fitness.”

Ronaldo had openly agitated for a move away from Old Trafford for much of the summer, after informing the club of his desire to leave to continue his career with a Champions League side after United’s dismal campaign last year earned them qualification to the continent’s second-tier competition, the Europa League.

But despite the best efforts of his agent Jorge Mendes, a route out of Manchester could not be navigated as one-by-one the likes of Chelsea, Bayern Munich, Borussia Dortmund and Atletico Madrid ultimately distanced themselves from a bid for the veteran star.

Ronaldo has been joined on the bench recently by United club captain Harry Maguire, another figure who has been marginalized recently in an apparent signal that the pair have taken the brunt of the blame for their team’s lack of cohesion which saw them start the English season with successive defeats to Brighton and Brentford.

And Ten Hag added of Maguire’s replacement, former Ajax star Lisandro Martinez, that he represents the new breed of player he is seeking to infuse into a team struggling through their recent malaise.

“The players who we signed are internationals for their countries,” Ten Hag said.

“Secondly, they have performed really well in the Champions League. And third also, they have individual skills, they are capable of playing high-intensity football, the players we selected. The players we recruited.”

It appears that, for now at least Maguire – and certainly Ronaldo – don’t fit the archetype of player that Ten Hag is seeking for his Old Trafford revolution.

And for just how long Ronaldo will accept being a bit-part figure will remain to be seen.

Next post How simply taking exercise can trigger a deadly reaction

[ad_1] Reports have claimed that Ukraine is planning a joint bid with Spain and Portugal for the football tournament Ukraine’s...

[ad_1] Several large cities will not have fan zones or show World Cup matches on giant screens A number of...

[ad_1] Russian figure skater Alexandra Trusova has triggered debate in her homeland after it was revealed she is changing her...