France experienced its worst drought on record last month, and officials have since been cracking down on conserving water.

Now a new artificial intelligence (AI) technology could be added to their arsenal, after it successfully uncovered 20,356 illegally-built private swimming pools.

The country’s tax authority announced yesterday that the system allowed it to collect about €10 million (£8.5 million) from homeowners who failed to report the facilities.

Developed by Google and Capgemini, the AI software was trained to spot pools in aerial images of nine French departments.

The news was first reported by French outlet Le Parisiene, which spoke to the deputy director general of DGFiP Antoine Magnant about how the tech could be used in future.

He said: ‘We are particularly targeting house extensions like verandas.

‘But we have to be sure that the software can find buildings with a large footprint and not the dog kennel or the children’s playhouse.’ 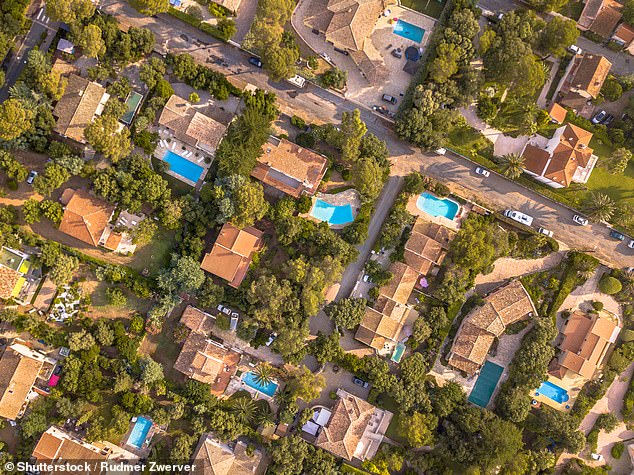 Developed by Google and Capgemini, the AI software was trained how to spot pools on aerial images of nine French departments (stock image) 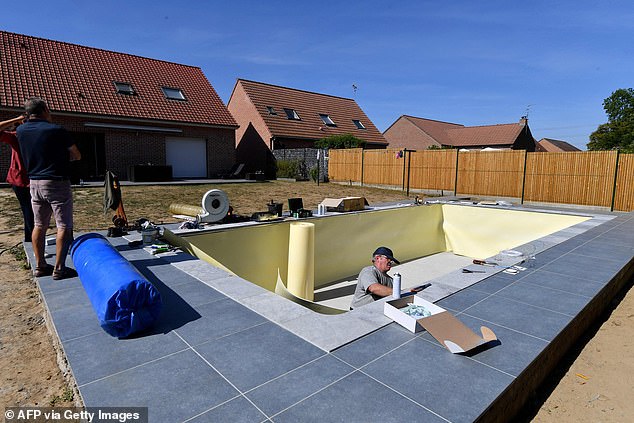 In 2020, there were about 3.2 million private swimming pools in France, meaning it has more per capita than any country in the world except the US. Pictured: Pool construction in Leforest

US-based Descartes Labs and OroraTech in Germany search for telltale signs of a fire, like smoke or changes in thermal infrared data, in satellite images of problem areas every few minutes.

Algorithms trained to look for different properties of a wildfire are then run and, if one is detected, its coordinates are sent to fire officials.

They can also predict how a fire may grow and move once it has started, helping authorities to plan evacuations and make judgement calls on the best way to tackle a growing blaze.

The models use real-time data from satellites like weather, topography and dryness along with cameras, on-ground sensors and aircraft equipped with infrared radars.

Private swimming pool sales were already booming in France before the pandemic, but the surge in employees working from home only increased demand further.

In 2020, there were about 3.2 million private swimming pools in the country, meaning it has more per capita than any country in the world except the US.

Since pools boost property values, they often lead to higher property and residency taxes, and must be declared within 90 days of completion.

This is usually the case unless they are moveable, under 10 square metres in size, or the owner neglects to notify tax authorities.

The AI tool was tested in the regions of Alpes-Maritimes, Var, Bouches-du-Rhône, Ardèche, Rhône, Haute -Savoie, Vendée, Maine-et-Loire and Morbihan.

Tax dodgers would initially receive a written warning, giving them the opportunity to divulge their asset, prior to receiving an inspection or fine.

In April, the the CGT union, which represents workers in the state finance sector, claimed that the software had up to a 30 per cent margin of error.

It was claimed that it was mistaking tarpaulins, solar panels and industrial tanks for pools, and measuring their sizes incorrectly.

However, the DGFiP said this was not indicative of the tool’s final performance, and that taxpayers will still have the possibility of contesting any challenges they put forward. 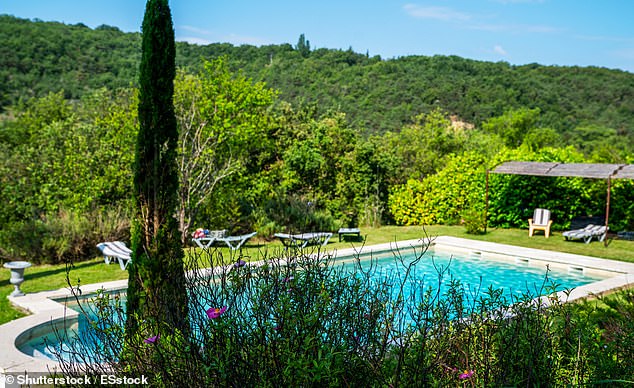 Since pools boost property values, they often lead to higher property and residency taxes, and must be declared within 90 days of completion in France (stock image)

The DGFiP has announced that the programme will now be rolled out nationwide, potentially leading to €40 million (£34 million) in new levies in 2023.

This comes after France had just 0.38 inches (9.7 mm) of rain in July, according to weather service Meteo-France, making it the driest month since March 1961.

Hosepipe bans were implemented in the worst affected regions, after more than 100 towns had no running drinking water and had to be supplied with special deliveries.

An MP for the French Greens discussed the idea of banning private pools in the country altogether as a drought-prevention measure.

The AI tool could also eventually be used to find undeclared home extensions, patios or gazebos, which are also used to factor property taxes, the authority said.

An algorithm has been found to predict future crime a week in advance with 90 per cent accuracy.

The artificial intelligence (AI) tool forecasts crime by learning patterns in time and geographic locations of violent and property offences.

Data scientists at the University of Chicago trained the computer model using public data from eight major US cities.

However it has proven controversial, as the model does not account for systemic biases in police enforcement and its complex relationship with crime and society.

[ad_1] This year's Nobel Prize in Physics has been awarded to three scientists for their research into quantum mechanics. Alain Aspect, John...