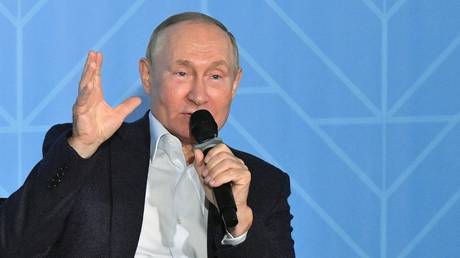 Europe should have been better prepared for its green energy transition, the Russian president says

Europe’s decision to slash natural gas imports while trying to reach climate goals was a mistake, President Vladimir Putin said on Monday during an environmental forum in Kamchatka in Russia’s Far East.

“First, they (EU) jumped ahead, and then, after cutting off Russian gas supplies, returned everything that was reviled,” Putin stated.

He emphasized that all nations are in favor of reducing emissions into the atmosphere, noting however that everything should be done in a timely manner. “And if you jump ahead, get cheap Russian gas, and then cut off the supply of this gas yourself and immediately switch back to everything that was previously condemned, including coal-fired generation, this, of course, is not the best option for solving global problems,” the Russian president said.

Under the REPowerEU plan, published in May, the European Union plans to phase out Russian fossil fuels by 2027 and boost its renewable energy production. However, skyrocketing gas prices in Europe, which some analysts believe could lead to an energy catastrophe this winter, have forced some states to fire up coal plants and expand nuclear power use.

[ad_1] Russian gas flow to European customers may be resumed via the remaining Nord Stream 2 string after Gazprom checks...

[ad_1] ‘Hidden’ sanctions on Russian exports should be lifted, agriculture minister says The deal that unblocked Ukrainian grain exports is...

[ad_1] The recently introduced plan sparked a public outcry and, along with the new ‘mini-budget’, sent the pound to an...

[ad_1] The group of oil-producing nations will meet in person this week for the first time since March 2020 OPEC...

[ad_1] The Russian ruble is set to become the official currency for the Donetsk and Lugansk People’s Republics, as well...

[ad_1] The process would be time-consuming and costly, according to Russia’s deputy PM Russia may be able to fix the...