Why you CAN’T forget to put sun cream on your neck! Striking picture shows UV-wrinkled and spotty skin of 92-year-old woman who only ever creamed her face

A shocking photo lays bare the consequences of only using sun cream on your face and not your neck.

A 92-year-old woman was left with a sun-battered neck covered in wrinkles and liver spots after choosing not to use UV-protective moisturisers below her face for more than 40 years.

But the pensioner, who was not named, was left with unblemished skin on her face, where she had used SPF products.

Experts from the Technical University in Munich, Germany, said the images show the ‘striking difference in solar damage’ between parts of the body that were protected in the sun.

They warned not enough is being done to encourage sun cream use, which is vital in reducing skin cancers.

The NHS encourages everyone to use at least factor 30 protection.

Regular users of sun cream with SPF 15 or higher can cut their risk of melanoma — a skin cancer that kills 2,300 people in Britain and 7,650 in the US every year — in half, studies suggest. 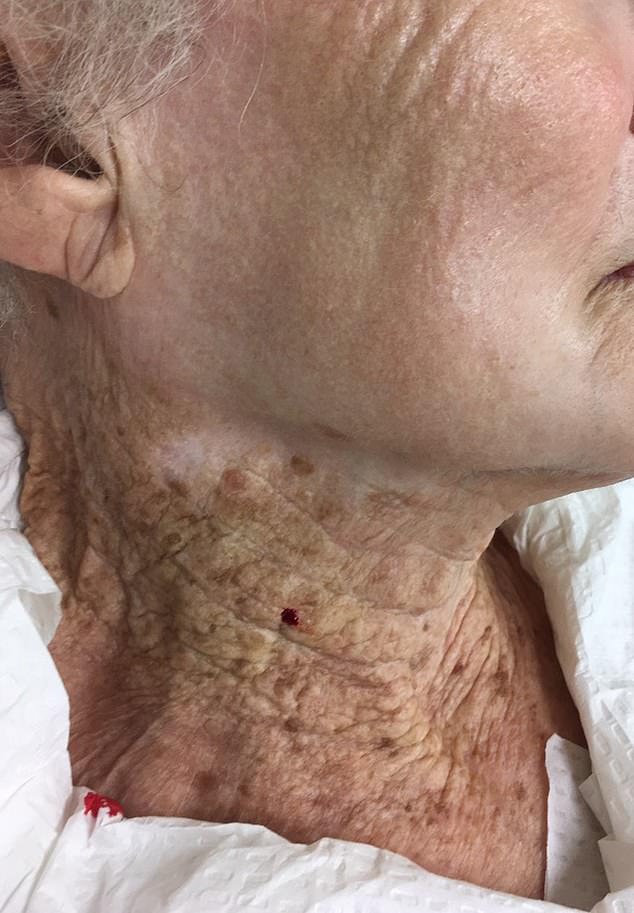 HOW TO STAY SAFE IN THE SUN

It can happen abroad or in the UK.

The woman’s picture was first reported in the Journal of the European Academy of Dermatology and Venereology.

Writing in the journal, dermatologist Dr Chritsian Posch said the picture shows how ‘preventing the negative effects of UV-radiation is both important and actionable’.

He said: ‘Clinical examination reveals a striking difference in solar damage between her cheek and neck.’

Looking older because of the passage of time is natural — but doing so because of sun exposure is known as photo-aging.

Around 90 per cent of all visible changes to the skin are caused by photo-aging, the Skin Cancer Foundation claims.

UV rays can penetrate the first two layers of skin — the epidermis and dermis — and damage cells’ DNA.

Damage in the top epidermis layer causes the body to produce melanin as an attempt to block the sun from continuing its assault.

This usually results in the body tanning, as the substance produces a darker pigment in the skin.

Exposure to UVA waves, which have a longer wavelength and penetrate deeper than to the other form of UV, UVB, leads to damage in the middle dermis layer over time.

The layer contains collagen, elastin and other fibres supporting the skin’s structure.

The deeper penetration damages these proteins, leading to the skin becoming looser and more wrinkly.

This is why UVA radiation is considered the main cause of photoaging. UVB is the type of ray more associated with sunburns.

Meanwhile infra-red light, which is felt as heat, and high-energy visible (HEV) light from the sun are also linked with damaging the dermis.

The combined effects can lead to the skin becoming looser, more wrinkly and liver spotted.

[ad_1] US stocks up on $300m worth of radiation sickness drugs but claims it has nothing to do with Vladimir...

[ad_1] Why unrealistic Instagram images of superfit new mums could encourage baby bluesFitness guru Chloe Madeley has been praised for...