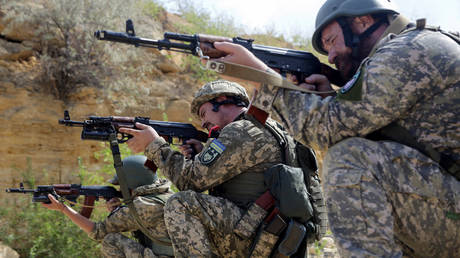 The length of the British-based combat course has increased from three to five weeks, UK media reports

The UK is set to “significantly expand” its training program for Ukrainian soldiers in a bid to support Kiev in its ongoing conflict with Russia, Sky News reported on Monday.

According to Sky, the UK military is extending the combat course from three to five weeks, and could potentially provide Ukraine with tens of thousands of fresh troops to take part in the hostilities. Apart from the UK, the expanded training will also be provided by instructors from eight other countries including New Zealand, Sweden and the Netherlands, the report says.

Around 4,700 Ukrainian personnel have reportedly already undergone the course at bases in the north, southwest and southeast of England since it began in June.

Ben Wallace, the UK Defence Minister, told Sky News that the training had “developed rapidly” and the decision to extend the course aims to “provide the best possible preparation for Ukrainian soldiers who will soon be in active combat operations.”

According to the outlet, as it currently stands, the program is based on the UK’s basic infantry training and allows participants to increase weapons-handling skills, learn first aid, fieldcraft and how to properly organize a patrol.

The additional two weeks are dedicated to honing more advanced skills such as trench and urban warfare, vehicle-mounted operations and includes drills in simulated combat environments, the report adds.

The decision to expand the training program comes on the heels of previous similar activities, with the Royal Navy instructing Ukrainian sailors in Scotland.

Next post When Britannia ruled the RAILS: Book reveals how Britain exported the railway around the globe

[ad_1] The current turmoil in British politics can lead to disastrous consequences. It also mirrors the current state of the...

[ad_1] The head of the ruling party has claimed that Russia critic Radoslaw Sikorski is helping Moscow’s cause against the...

[ad_1] A survey shows that she is less popular than Boris Johnson before his resignation British Prime Minister Liz Truss’...

[ad_1] KYIV, Ukraine — Ukrainian troops continued to push forward Monday with their offensive that has embarrassed Moscow, with Kyiv...