But it’s not just what you eat; how you eat is also vital.

You might assume that if you consumed the same meal, in the same quantities, day in day out, it would have the same impact.

In fact, where you eat, how you eat, how often, who with and what mood you’re in can all affect how you feel after a meal — literally — and the health benefits. 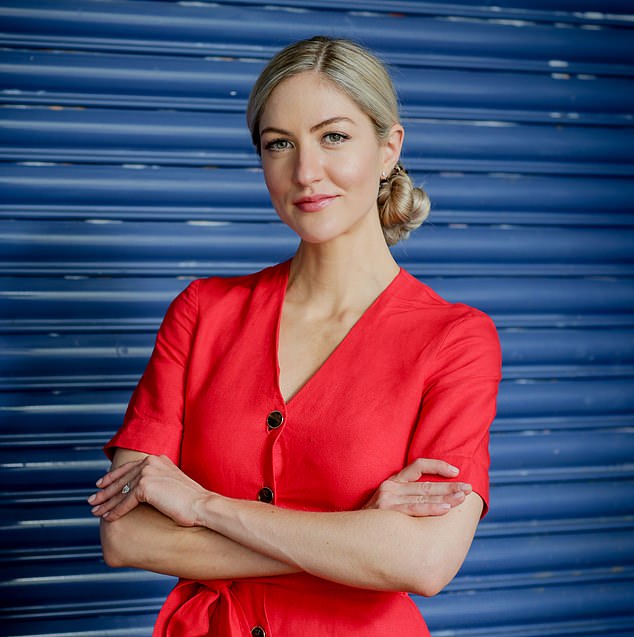 Everywhere you turn these days, it seems you can’t avoid fermented foods — these are very much in vogue in the nutrition and diet worlds, and with good reason, writes Dr Megan Rossi (pictured)

This might have been something your parents told you to do to improve your table manners, but chewing is a vitally important part of the digestive process. It kick-starts digestion by stimulating the production of saliva. This contains the enzyme amylase, which breaks down starch, found in foods such as bread and pasta.

Research shows that up to 30 per cent of starches are digested in your mouth. So if you bolt your food down, you’re missing this key stage.

(Experience amylase at work first-hand by chewing a piece of white bread until it becomes liquid: it becomes sweeter the more you chew, a sign your salivary enzymes have started breaking down the starch in the bread into sugar.)

This also gives the rest of your digestive chain a heads-up that food is incoming, which alerts your gut to begin releasing the right mix of acids and digestive enzymes. You also gulp in less air, another benefit that means smoother digestion with less discomfort.

But it’s not just about avoiding a stomach ache. A study published in the American Journal of Clinical Nutrition in 2009 found that people absorbed about 15 per cent more nutrients when they chewed almonds 40 times, than when they chewed just ten times a mouthful.

And if weight management is your goal, another study, from Harbin Medical University in China showed that people took on 12 per cent fewer calories when they chewed each mouthful 40 times compared with 15 times. Their levels of ghrelin (the ‘hunger’ hormone) were notably lower 90 minutes after the meal.

‘Breakfast like a king, lunch like a prince, dine like a pauper’ won’t suit everyone — some people just can’t stomach a large breakfast. But I still think it’s worth following this principle, particularly if you have problems with your blood sugar levels. This is because our bodies are better primed to metabolise carbohydrates in the morning — for instance, the release of insulin is more efficient — compared with in the evening, linked to our circadian rhythm.

This was seen in a study by Tel Aviv University in Israel, where researchers compared the impact of consuming the same amount of calories, but eaten differently.

Those who had the large breakfast had 20 per cent lower blood sugar levels over the day, and higher insulin levels despite eating the exact same food. 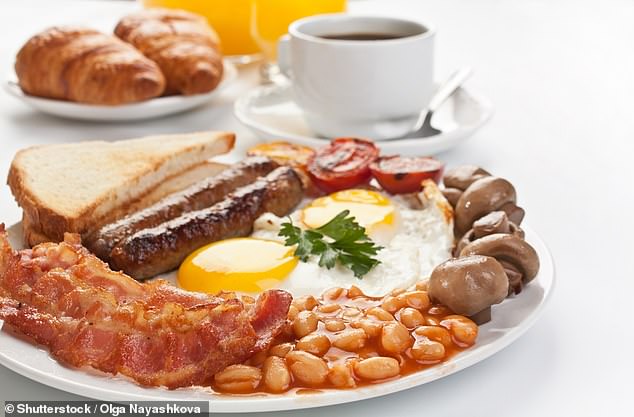 ‘Breakfast like a king, lunch like a prince, dine like a pauper’ won’t suit everyone — some people just can’t stomach a large breakfast. But I still think it’s worth following this principle, particularly if you have problems with your blood sugar levels

This is partly for the simple reason that if you eat a lot and then lie down, you’re likely to get heartburn and indigestion. But most importantly, by avoiding eating late (stopping at least a couple of hours before you go to bed) you’re increasing your overnight fast.

There is some evidence that this break from digesting means our gut microbes can work on other essential tasks, such as helping the immune system clear out old cells to make room and stimulate the production of new ones.

A break of about 12 hours is considered optimum. While some fasting protocols suggest a 14, 16 or even 18-hour break, there’s not enough robust evidence to suggest increased benefits for longer fasts.

The exception to the night eating rule is if going to bed hungry interferes with your sleep. Then a small, fibre-filled snack such as a handful of nuts and seeds or my favourite ‘Dorito’ popcorn (see recipe) before you hit the sack won’t do any harm.

Of course, de-stressing is easier said than done. But when you’re relaxed, more blood can flow to the gut and this fuels more effective digestion.

I often recommend my clients practise three minutes of diaphragmatic breathing (also known as belly breathing) before each meal as this can notably reduce gastrointestinal distress, ranging from reflux to indigestion.

Step 1: Place one hand on your chest and the other on your belly. Take a relaxed, deep breath in through your nose, then gently release the air out through your nose. This is diaphragmatic breathing, and making a conscious note to switch to it can have a powerful calming effect.

Step 2: With your next breath in, allow your belly and rib cage to expand out, feeling your bottom hand rise while your chest hand remains still. Then breathe out — your chest hand then moves the most (known as chest breathing).

And try not to eat on the run — something I’m also guilty of doing, but you’ll likely eat more than you need, not enjoy the food as much and not chew properly. The perfect storm for poor digestion.

If you’re prone to constipation, the science shows that periods of fasting between meals — i.e. not snacking — can help keep you more regular.

This is due to the ‘migrating motor complex’, which kicks in about 90 minutes after a meal. Essentially, it pushes food down the intestine.

Now, I’m not anti-snacking. I personally am big on snacks, especially high-fibre ones that help to keep your hunger at bay. But if you’re struggling with constipation, sticking to three meals a day is well worth trying.

When did you last linger over a meal with friends or family? I’m willing to bet it’s a treat rather than a habit.

Yet studies show that friends and families who eat together are generally happier and more satisfied with their life with a greater sense of community, compared to those who always ate separately.

And one study published earlier this year in Frontiers in Nutrition involving more than 40,000 teenagers found that those who eat with their parents reported doing better at school.

Practise these six steps and you will definitely see a difference!

Some phytochemicals (plant chemicals) are actually hormones. For instance melatonin — aka, the sleep hormone — which our bodies naturally produce, is also found in black rice (a type mainly cultivated in Asia), pistachios and peppers.

Swap low-fibre, additive-heavy crisps for this high-fibre, delicious popcorn to sort those afternoon cravings in minutes.

Put the corn kernels into a brown paper bag and fold the top over twice to seal. Microwave on high for 3 minutes, or until you hear a pause of about three seconds between pops.

Leave to stand for 20 seconds, then carefully open the bag. Drizzle in the oil, followed by the flavouring. Reseal the bag and shake.

Is there any way to stimulate a rapidly declining metabolism post menopause? I lost 7st through a slimming club and exercise. But since hitting the menopause, it’s getting increasingly difficult to get the pounds off. And I still need to lose another 2 st.

Weight management can definitely be a challenge for many going through the menopause. This is due to a number of factors, including hormone-related changes to our gut microbiome.

The evidence for calorie-counting is limited for long-term weight management, not least because calorie information isn’t as accurate as we’ve been led to believe. But also because the amount of calories our bodies burn during digestion differs based on how processed the food is. Calorie-counting also ignores our gut microbes, which play a key role in metabolism. Rather, try these three science-backed principles: