Covid may be on the brink of flaring up again, leading experts claimed today amid signs that the virus has already bounced back in parts of England.

Official figures released today showed the nation’s outbreak is smaller than it has been for nearly a year, with just 705,000 people in England thought to be infected — roughly one in every 75.

It marked a 9 per cent drop on the Office for National Statistics’ previous weekly estimate.

While cases have been plunging nation-wide since mid-July, scientists predict they will inevitably spike again over the coming weeks as people spend more time indoors, pupils return to classrooms and students head back to uni.

Separate NHS data also show Covid admissions are already rising in the South West, prompting fears that a similar trend could crop up across the rest of the country.

But experts have said there is no need to panic. Professor Paul Hunter, one of the country’s most respected Covid commentators, from the University of East Anglia, told MailOnline that cases ‘look as though they’ve plateaued at the moment’. 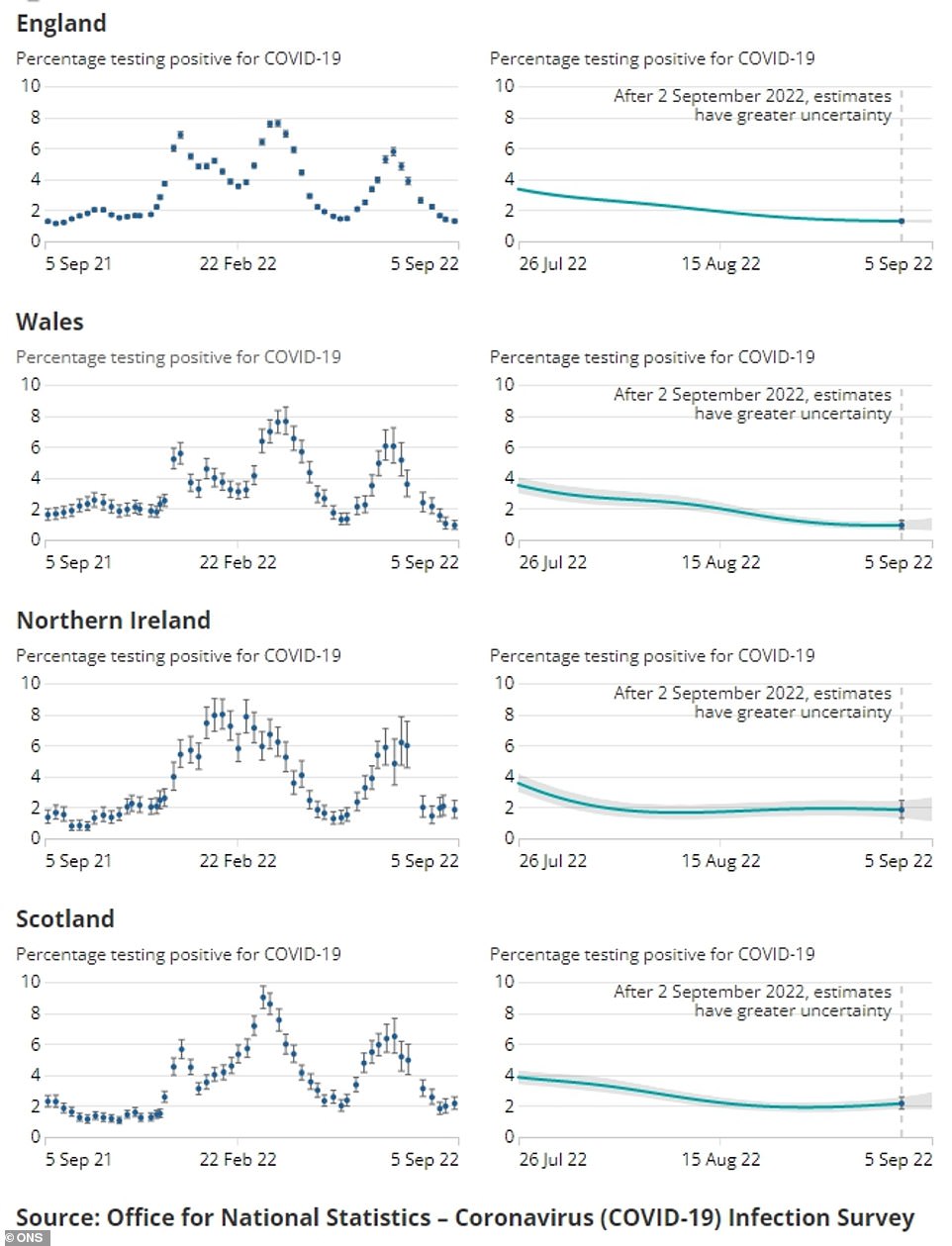 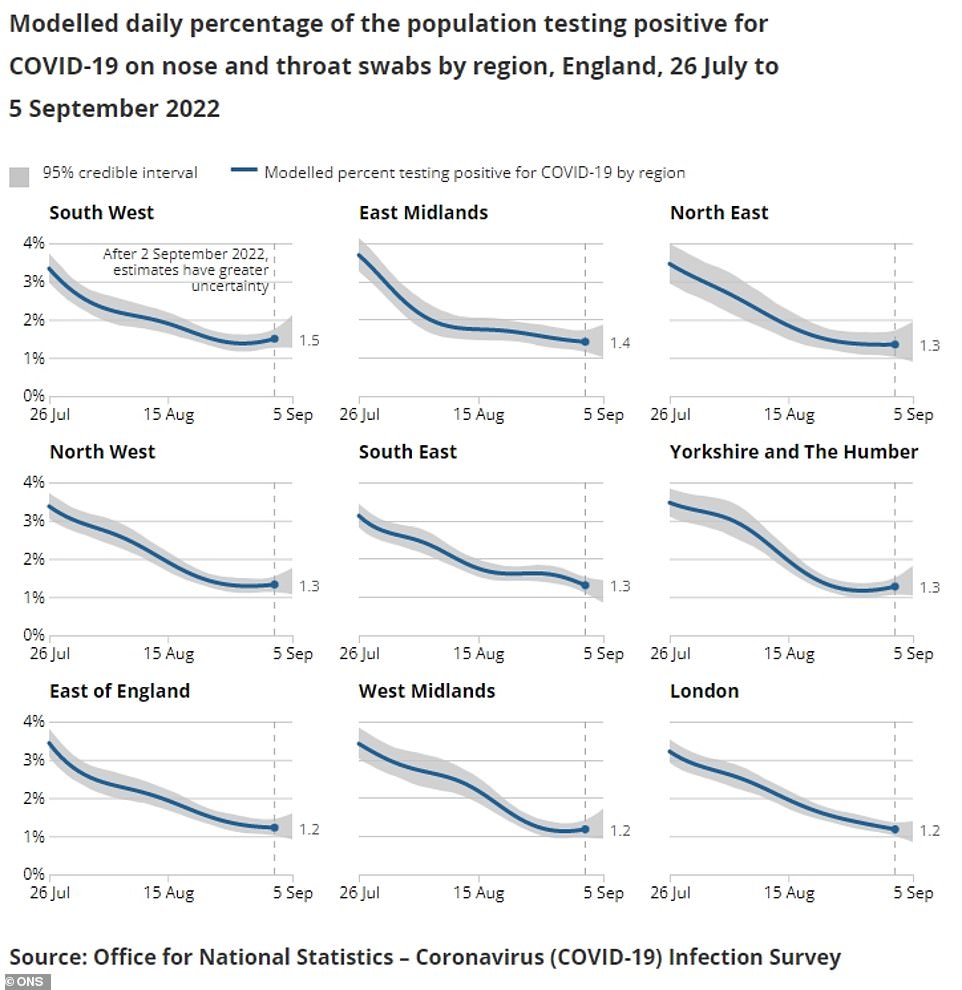 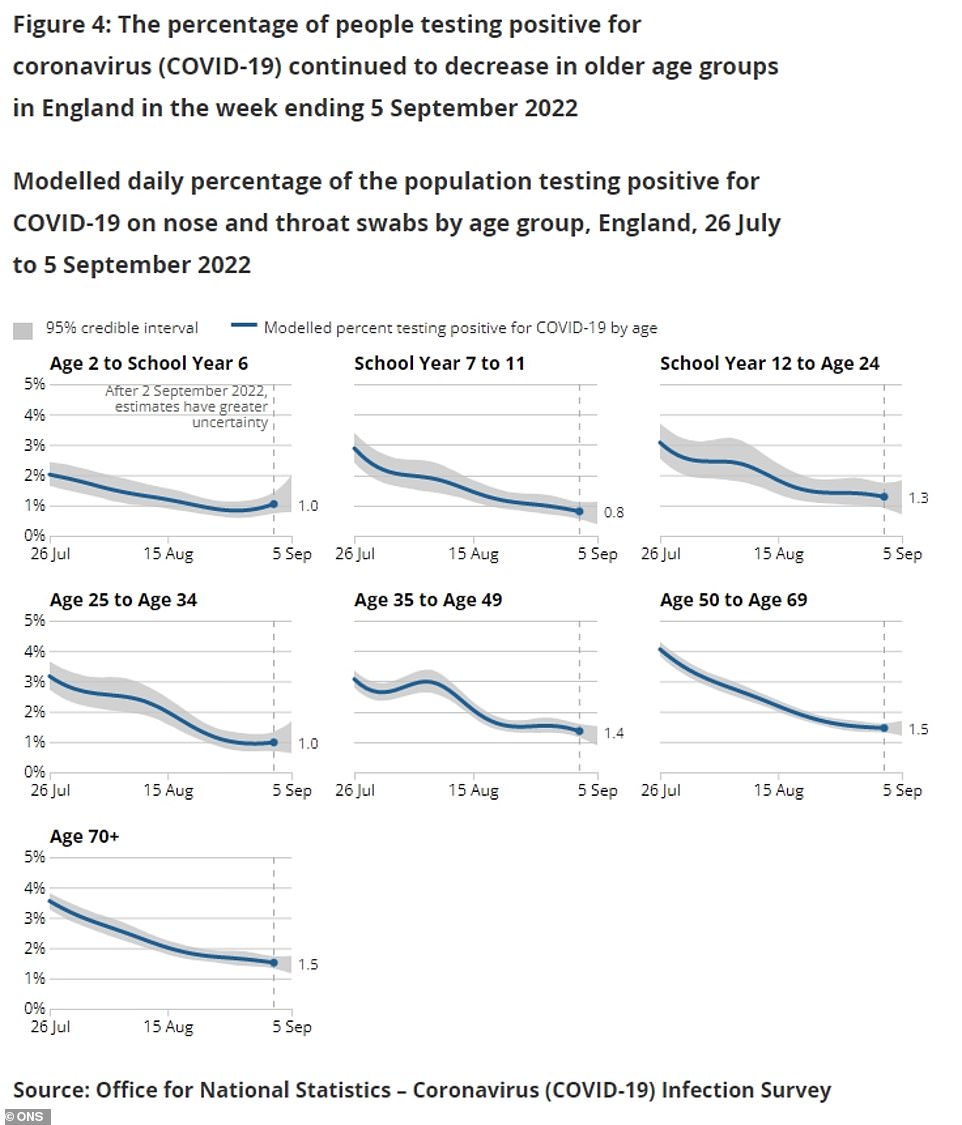 Britain’s preeminent medical journal was today accused of giving hardline Covid scientists too much clout and risking being one-sided with its ‘Covid inquiry’.

The British Medical Journal (BMJ) last week launched a multi-part series delving into the Government’s handling of the pandemic. Editors pledged articles would analyse both the successes and failures.

Yet so far, almost all the published pieces have leaned heavily on members of a left-wing group of experts called Independent SAGE, which has repeatedly criticised No10 for ditching restrictions too early.

The self-appointed panel famously lobbied for a Christmas lockdown last year and called for mask mandates to be brought back during April’s Omicron resurgence — despite both waves fizzling out naturally without crippling the NHS.

The BMJ, a 180-year-old publication, defended its decision to feature the group so heavily, despite pleas from top experts to widen its net and end its dependence on ‘similarly-minded’ voices.

Scientific arguments on how best to deal with Covid have drastically changed since the start of the pandemic in early 202, with vaccines blunting the threat of the virus by morphing it into something that closer resembles flu — a seasonal virus the country lives with every year.

He added: ‘[The] big issue is how many cases we will see as we move towards Christmas. We would expect to be seeing it going up.’

Queen Elizabeth II’s funeral on Monday (September 19) and ceremonial events held over the last week to mark her passing sparked suggestions that the massive crowds could fuel the spread of the virus.

However, Professor Hunter said he does not believe the events will ‘play much of a role’ in rising rates.

Following the Platinum Jubilee in June, ‘although cases went up, they went up too soon to be due to the Jubilee and it was probably more to do with the school holidays and people going overseas, rather than mass gatherings’, he told MailOnline.

The Women’s Euros, considered another source of mass gathering, had barely ‘any real impact’ on rates either, he added.

Weekly estimates published by the ONS, which are closely watched by the Government, are considered the most accurate way of tracking the shape of the UK’s outbreak.

Unlike the toll of reported infections, which has been wildly inaccurate since the mass testing scheme was wound down in April, it doesn’t rely on Britons testing themselves and reporting the result.

However, in Scotland, prevalence rose to 113,500 – a 9 per cent increase on the previous week.

The figures — reflecting the week ending September 5 — are based on swabs from a representative sample which includes thousands of people.

When broken down by region, it showed that cases were rising in South West and Yorkshire (prevalence of 1.5 per cent) and The Humber (1.3 per cent).

Between September 5 and September 12, the region’s admissions rose by almost a fifth (18.9 per cent) from an average of 43 per day to 52.

But, in total, an average of 519 Covid-infected people were admitted to hospitals with the virus in England in the week to September 12 — eight times lower than levels seen at the peak. Not all of these patients are necessarily ill with the virus. 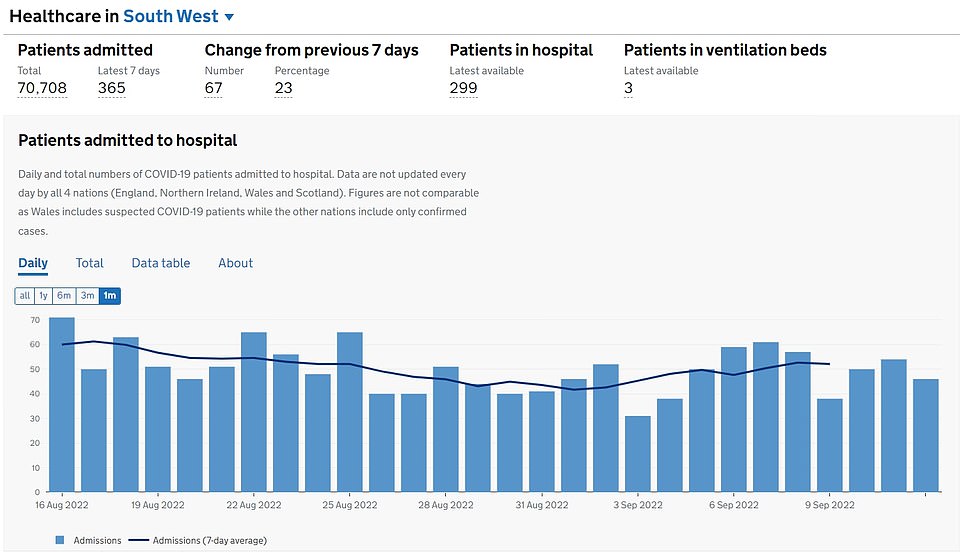 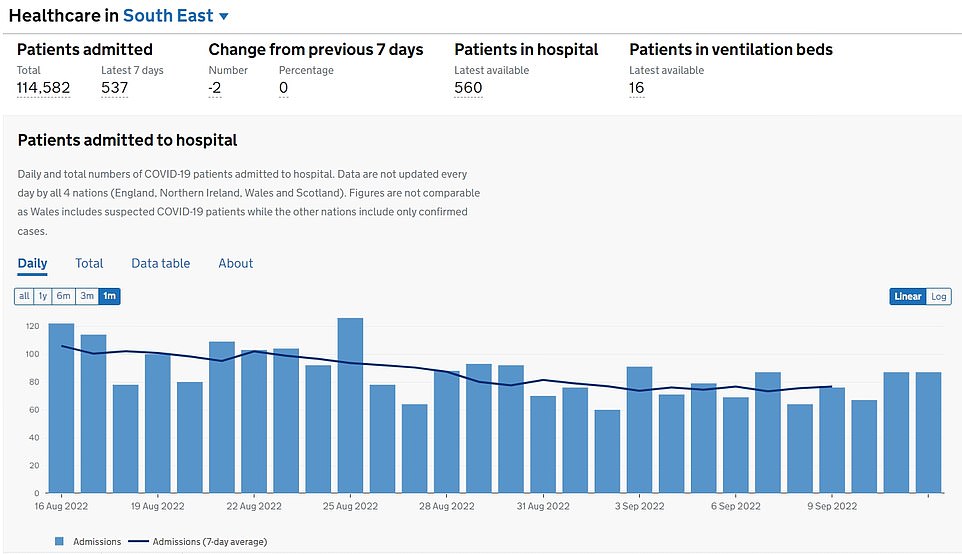 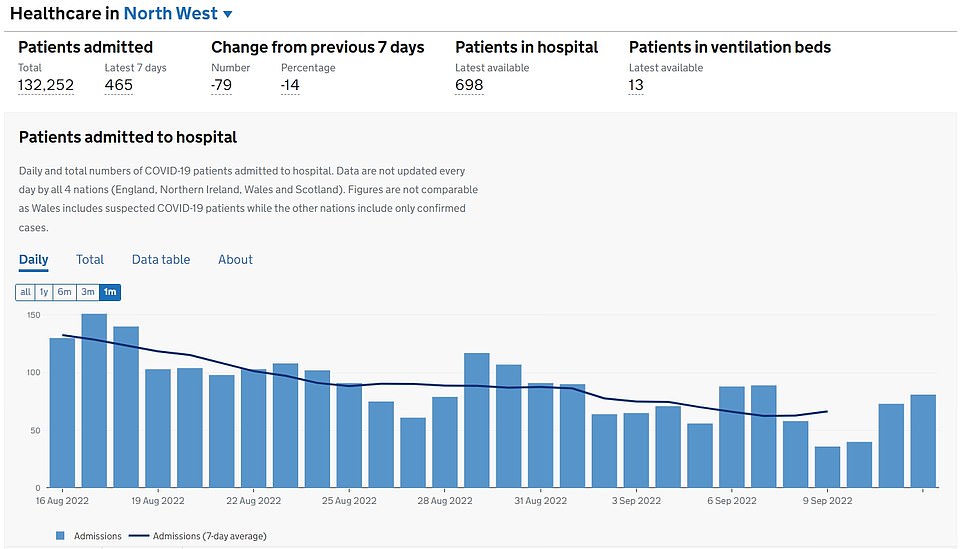 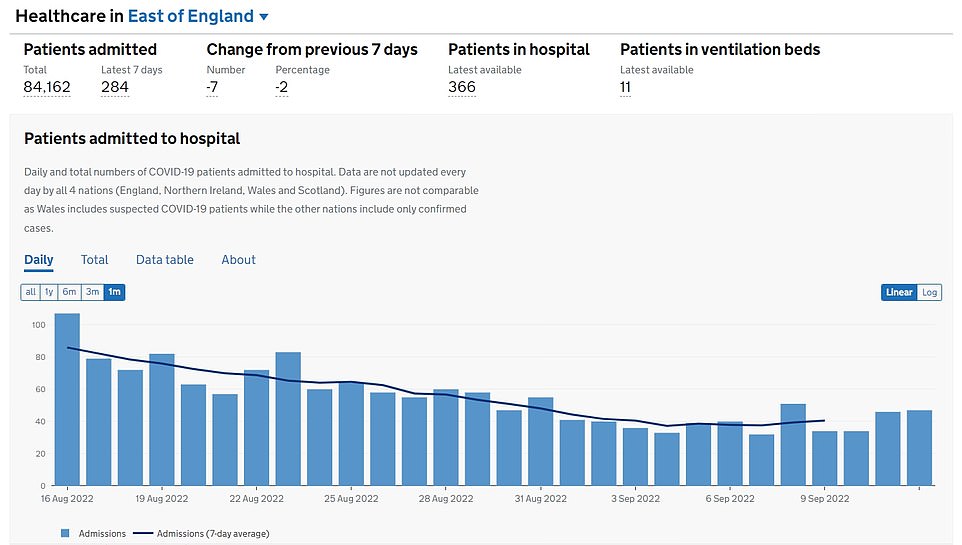 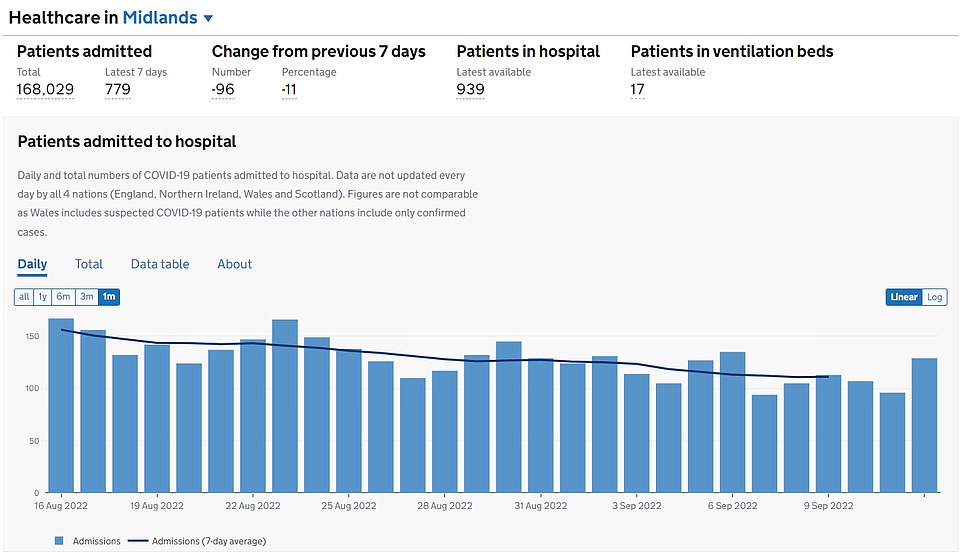 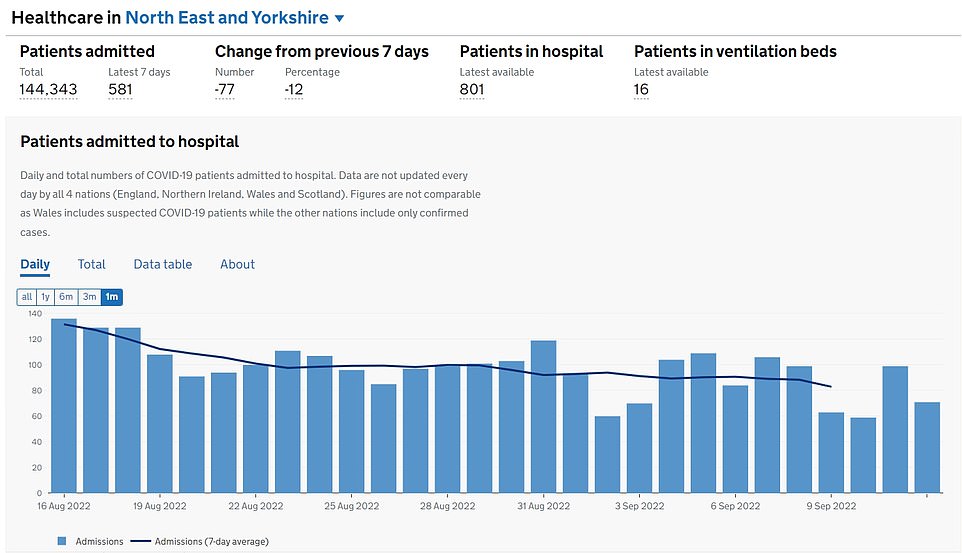 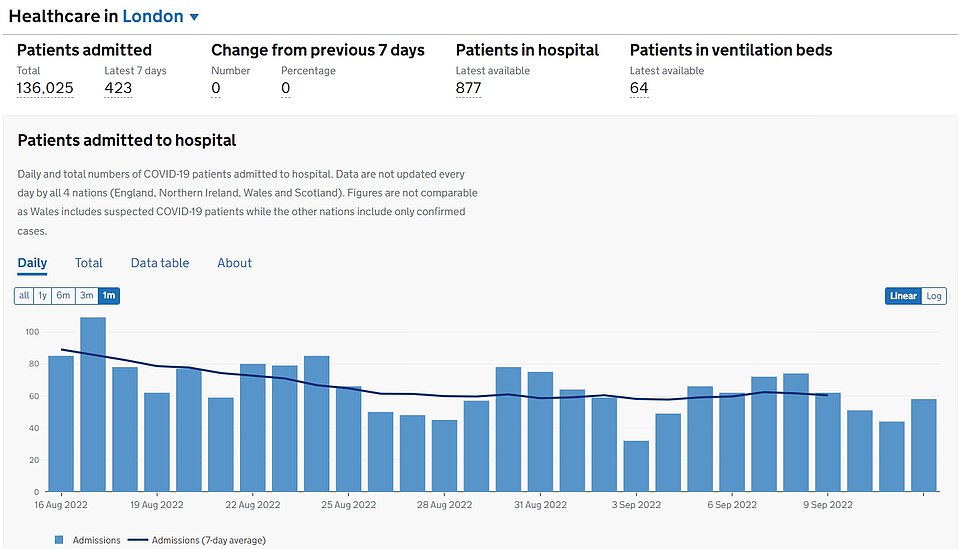 Meanwhile, the figures also reveal there were 4,540 people in hospital with the virus in the week to September 14 — the lowest level in three months and seven times lower than the peak of 34,000 in January 2021.

Despite the expected rise in the coming weeks, Liz Truss’s Government is unlikely to bring back any curbs after her old boss Boris Johnson chose the ‘living with Covid’ approach.

Under the blueprint designed to free Britain from its Covid shackles in a post-lockdown world, mandatory isolation rules, free testing and work from home guidance was scrapped.

Ministers instead put their confidence in vaccines, which have drastically blunted the threat of the virus over time, morphing it into something that closer resembles flu — a seasonal virus the country lives with every year.

Last week saw the official launch of the Covid autumn booster programme, which is now open to the over-65s, carers and pregnant women.

Some 26 million people in the UK will be offered their booster top-up in the coming months.

And according to data released by NHS England, as of yesterday (September 15), more than 550,000 had already received their jab.

Health officials have stressed getting any booster is more important than the type of vaccine used, as they say the new bivalent vaccines probably only offers marginally better protection.

The approach is in line with advice from the Joint Committee on Vaccination and Immunisation (JCVI), the panel of top experts advising the Government on the roll-out.

It said the top-up campaign is needed to keep immunity high this winter and protect the NHS from another spike in admissions as it attempts to tackle its record backlog amassed during the pandemic.

Next post Miss Manners: Friend asked to stay with me when guests filled her home