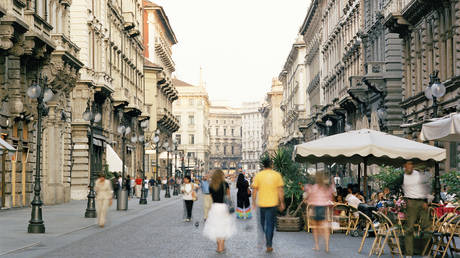 Italy is at risk of losing up to 582,000 jobs due to the energy crisis and the resulting economic downturn, national media reported on Sunday, citing a study by the Confindustria Association of Industrialists.

However, if the price hits €298 per megawatt-hour, which is the predicted level based on current gas futures, Italy may suffer a 3.2% decline in GDP and lose hundreds of thousands of jobs.

According to the analysts, if Russia shuts down gas supplies altogether from October, Italy could be about 8% (6.4 billion cubic meters) short of the gas it needs to cover demand, taking into account available alternative supplies and reserves. Such a shortage could lead to mass closures of businesses and industries in the country.

Italy relies on imports for nearly 75% of its energy consumption. At the start of this year, it was importing 40% of its gas from Russia, but in July its Russian purchases dropped to 25% due to sanctions. Earlier this month, Italy lost much of its supplies from Russia when Gazprom halted flows via the Nord Stream 1 pipeline due to technical issues. Italy’s Economy Minister Daniele Franco recently warned that the cost of Italy’s net energy imports could double to €100 billion this year, or 3% of GDP.

Previous post Miss Manners: Friend asked to stay with me when guests filled her home