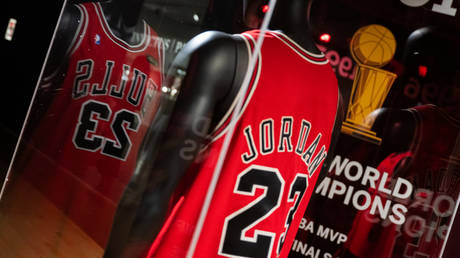 Michael Jordan can boast another world record after the sale of his old Chicago Bulls jersey made history this week.

Sotheby’s auction house has revealed that a jersey worn by the 59-year-old in Game 1 of the 1998 NBA Finals, as featured on the well-received documentary ‘The Last Dance’, had been sold for $10.1 million.

It is said that the popularity of the documentary has also re-triggered an interest in Jordan and the Bulls that has now stretched to memorabilia.

And though the Bulls lost the game in question 88-85 to the Utah Jazz, the jersey from the series which the Bulls won 4-2 – helping Jordan and the franchise complete their second ‘three-peat’ of NBA championships – eclipsed the $9.28 million recently paid for Diego Maradona’s ‘Hand of God’ jersey worn at the 1986 World Cup in a memorable win over England in the quarter-finals.

A record-breaking day. Michael Jordan's iconic 1998 NBA Finals 'The Last Dance' jersey has sold for $10.1 million, setting records for a basketball jersey, any game-worn sports memorabilia, and most valuable #MichaelJordan item ever sold at auction. pic.twitter.com/7t8G98N5pW

While the jersey has broken the previous record for game-worn items in sports, this stretches to memorabilia related to Jordan overall with the previous record held by an autographed 1997-98 Upper Deck Game Jersey patch card that sold for $2.7 million in October last year.

A fortnight later, on October 25, Jordan’s Nike Air Ships from his rookie season were also sold for $1.47 million.

As for the most expensive piece of sporting memorabilia, bragging rights in this aspect go to New York Yankees slugger Micky Mantle’s 1952 Topps card sold for $12.6 million late last month.