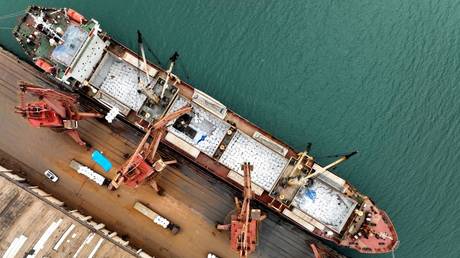 Russian producer of mineral and potash fertilizers, Uralchem, has decided to supply its products to Africa free of charge, the company’s chief executive Dmitry Konyaev announced on Monday.

“The situation in the world today is really bad. Africa has been starving and will continue to starve, unfortunately. We, as a company, even decided to supply fertilizers to Africa for free, just because we are part of this global chain when you need to produce food,” Konyaev said during his speech at the Innofood forum in Sochi.

The first batch of 25,000 tons of humanitarian cargo could reportedly be sent to the Republic of Togo.

According to Uralchem CEO, there are no problems with food security in Russia, since the country is fully provided with fertilizers and can send a significant quantity for export.

Earlier this month, President Vladimir Putin said at a summit meeting of the Shanghai Cooperation Organization that the country is ready to transfer 300,000 tons of Russian fertilizers accumulated in EU ports due to Western sanctions to developing countries free of charge. While Putin welcomed the decision to allow Russian fertilizers into the EU, he criticized Brussels for only allowing the bloc’s member states to buy them.

In late July, Moscow and Kiev signed a deal unblocking Ukrainian grain exports via the Black Sea at UN-brokered talks in Istanbul. The agreement was also supposed to allow Russia to deliver fertilizers and food goods to global markets, which the Kremlin says has not happened.

Previous post The world’s oldest winged insect is in trouble. How frightened should we be?