By Health Reporter For Mailonline

A man needed to have a ring cut off of his penis using an electric grinder after his ‘experiment’ went wrong.

The unidentified 38-year-old, of Indonesia, went to hospital with ‘severe penile pain’ and swelling.

He confessed to medics that the ring, made of metal, had been stuck on his member for 10 hours.

After being quizzed about his unusual injury, the man also admitted that it got stuck during an ‘experiment with friends’. 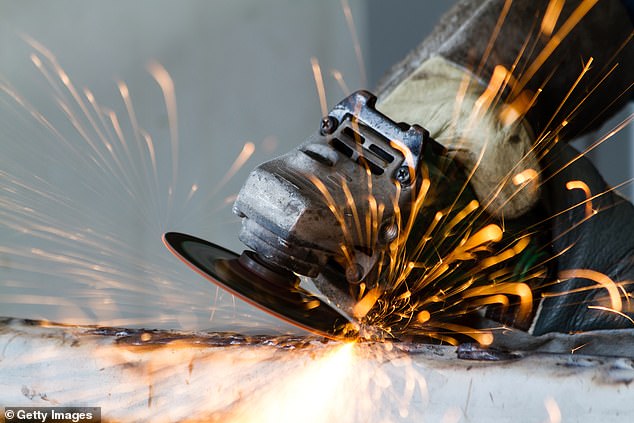 The unidentified 38-year-old, of Indonesia, went to hospital with ‘severe penile pain’ and swelling. Pictured, a generic angle grinder

Writing in the journal Urology Case Reports, doctors said he was easily able to slip it on and off.

‘However, it got stuck at some point and his penis started to hurt,’ wrote the team at Dr Soetomo General Academic Teaching Hospital in Surabaya.

WHAT IS PENILE RING ENTRAPMENT?

Penile ring entrapment is a rare but often dangerous urological emergency that could cause mechanical and vascular complications.

According to medics, a prolonged entrapment of more than 30 minutes could lead to irreversible damage.

They have devised a grading system to indicate the severity of penile ring entrapment:

The man told doctors who treated him that he could still urinate, but it had become uncomfortable to do so.

Surgeons chose to remove the ring using an electric grinder, which are often relied on to cut through metal.

Doctors able to pull the ring off after it was broken, releasing the man’s member.

Cutting metal creates heat, so the man’s penis had to be sprayed with ‘continuous saline injection’ to cool it down during the procedure.

Medics also inserted a metal plate between the ring and penile skin to prevent burn or pressure injury.

Writing in the journal, doctors explained that penis rings reduce blood flow through the veins, which causes the penis and testicles to swell.

The medics said young men often use rings ‘to sustain’ an erection.

However, prolonged entrapment of more than 30 minutes could lead to irreversible damage, experts warn.

Keeping the ring on for too long — also known as penile strangulation — can lead to gangrene, when body tissue turns black and dies. In rare cases, amputation may be needed.

While each case of penis ring entrapment is managed individually, depending on the patient’s case, they noted that several patients may not be admitted to the emergency room in time due to a lack of awareness or shame.

Although there is no universally established method for penile strangulation management, ring cutting using an electrical grinder is the most commonly used method.