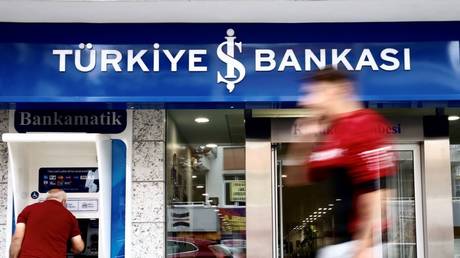 The decision follows the threat of sanctions from Washington

Turkey’s Isbank and Denizbank announced on Monday they have halted the use of Russia’s Mir payment system following a warning from Washington that financial institutions risk secondary sanctions if they help Moscow bypass US penalties. The banks confirmed their decision to Russia’s RIA Novosti news agency.

Isbank also explained to Bloomberg that its decision follows the US Treasury’s statement on the subject.

Last week, the US Treasury’s Office of Foreign Assets Control (OFAC) announced that it was ready to impose sanctions on any institution outside Russia using the country’s payment system. Later, sources told the Financial Times of the US and EU’s intention of putting pressure on Turkish banks, to prevent them from helping Moscow “bypass the sanctions.”

Turkish banks joined the Mir payment network in early August, allowing Russian tourists to pay for their purchases in the country.

Mir was developed by the Central Bank of Russia as a domestic alternative to Visa and Mastercard after the first round of sanctions was imposed on Moscow in 2014. Since the introduction of the new payment system, Russian banks have issued more than 129 million Mir cards. They are currently accepted in Turkey, Vietnam, Armenia, South Korea, Uzbekistan, Belarus, Kazakhstan, Kyrgyzstan, Tajikistan, South Ossetia, and Abkhazia.