Delivering sharp, electrical currents deep inside the brain can stifle symptoms of the distressing mental condition.

Similar brain-zapping treatment has been given to Parkinson’s patients for decades, with it proven to thwart their tremors and help them walk freely. 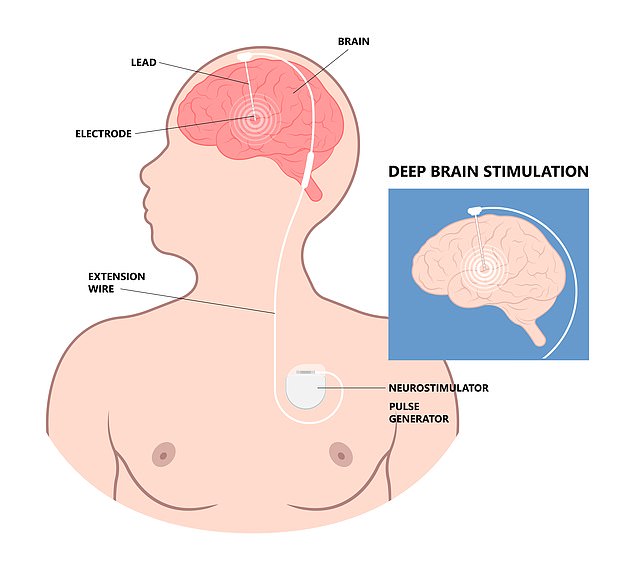 Delivering sharp, electrical currents deep inside the brain can stifle symptoms of the distressing mental condition. Similar brain-zapping treatment has been given to Parkinson’s patients for decades

Around 750,000 Britons are thought to be living with the condition, which can leave sufferers obsessed with washing their hands, tidying up and checking that doors are locked.

Charities estimate up to 3million Americans are affected, including Hollywood stars Justin Timberlake and Jessica Alba.

Roughly half of patients are classed as having ‘severe’ symptoms, which can impact sufferers so badly that they don’t want to leave their home.

What is obsessive compulsive disorder?

Obsessive compulsive disorder, usually known as OCD, is a common mental health condition which makes people obsess over thoughts and develop behaviour they struggle to control.

It can affect anyone at any age but normally develops during young adulthood.

It can cause people to have repetitive unwanted or unpleasant thoughts.

People may also develop compulsive behaviour – a physical action or something mental – which they do over and over to try to relieve the obsessive thoughts.

The condition can be controlled and treatment usually involves psychological therapy or medication.

It is not known why OCD occurs but risk factors include a family history of the condition, certain differences in brain chemicals, or big life events like childbirth or bereavement.

People who are naturally tidy, methodical or anxious are also more likely to develop it.

Drugs are also dished out, with anti-depressants used to alter the chemical balance in the brain. Although doctors are baffled as to what causes OCD, they believe that unusually low or high levels of serotonin may be to blame.

DBS is already approved in the US for OCD, but only in the most serious, treatment-resistant cases.

Surgeons target certain parts of the brain with the electric impulses, over-riding any abnormal brain cell-firing patterns — replicating how it works in Parkinson’s.

But NHS bosses state the procedure — which involves surgically implanting a pulse generator similar to a heart pacemaker into the chest, which is connected by wires to specific areas of the brain — should only be used for research purposes because of the ‘inadequate’ evidence proving it is either safe or effective.

Researchers from Houston’s Baylor College of Medicine reviewed all of the available literature on using the risky op to treat OCD.

It involved pooling the results of over 30 studies into the topic, involving 350 adults with severe to extreme cases of the condition.

None of the patients, who had lived with the condition for two decades, on average, had seen any improvement in their symptoms over time.

But volunteers given DBS subsequently only endured half as many symptoms after the operation compared to before, the analysis revealed.

Two-thirds of participants also said the effects were life-changing.

The team called their results, unveiled in the Journal of Neurology, ‘encouraging’ and said there was a ‘strong evidence base’ to support DBS for OCD.

Yet Dr Sameer Sheth and colleagues also admitted that the procedure ‘is not without its limitations’.

The team said: ‘First and foremost, it requires chronic implantation of hardware and carries the associated risk of complications.’

A follow-up operation to implant the chest stimulator is carried out approximately a week later.

As with any surgery, risks include bleeding, infection and blood clots. Placement of the DBS can also trigger seizures, in rare cases.

A few patients in the analysis also developed ‘obsessions’ for the stimulation itself, which can cause a tingling sensation.

Writing in the journal, Dr Sheth and team said: ‘It remains a significant barrier to the effective implementation of DBS for OCD in certain patients.’

Previous post ‘Our world is in peril’: At UN, leaders push for solutions