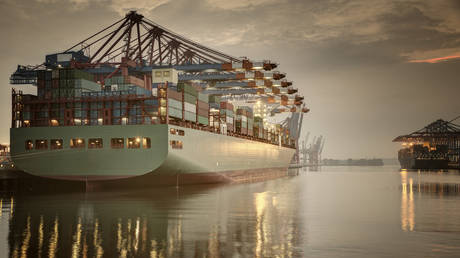 The volume of German imports from Russia has risen over the first seven months of this year by 32.6% in annual terms, amounting to $27.9 billion, the Russian Trade Mission in Berlin told RIA Novosti on Monday, citing data from Germany’s federal statistical office, Destatis.

According to the Russian trade representative in Germany, Andrey Sobolev, the rise in imports of fuel and energy products through July was 40.5%. Purchases of Russian gold have risen more than tenfold, while the volume of silver imports jumped by almost five times. The EU country has also boosted purchases of other metals from Russia, including copper, aluminum, and nickel.

The report also indicated that German exports to Russia decreased by 43.6% to $10.2 billion compared to the same period last year. Declining exports caused a $17.7 billion trade imbalance for Germany.

The trade representative explained that, despite the general decline in exports to Russia, “there was an increase in supplies from Germany of pharmaceutical products, seeds and fruits.”

Russia accounted for 2.3% of total German foreign trade and was the fourth most important country for German goods outside of the EU in 2021. In April, US analytics firm S&P Global warned of a possible financial shock if there’s a “trade rupture” between the two countries.