‘Night owls’ are at an increased risk of developing type 2 diabetes – as fat that is not burned for energy builds up in their body, study finds

Staying up late at night can cause fat to build up in a person’s body, and put them at an increased risk of developing type 2 diabetes as a result, a new study finds.

Researchers at Rutgers University, in New Brunswick, New Jersey, found that night owls were at an increased risk of developing the life-altering condition because of the impact their abnormal sleep schedule has on their metabolism.

People who wake up earlier in the day are more likely to use fat as an energy source when resting or exercising than their counterparts. As a result, fat build-ups are less likely among ‘early birds’ – making disease less likely as well.

This study adds to an increasing body of research linking sleep timing and environment to the development of diabetes. A Northwestern University study published earlier this year found that having a light source present while sleeping could increase a person’s risk of developing the disease that affects around ten percent of Americans. 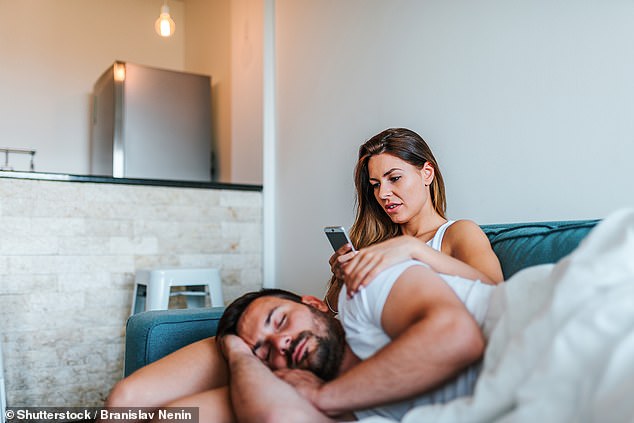 ‘The differences in fat metabolism between ‘early birds’ and ‘night owls’ shows that our body’s circadian rhythm (wake/sleep cycle) could affect how our bodies use insulin,’ Dr Steven Malin, an assistant professor at Rutgers who focuses on metabolism, said in a statement.

‘A sensitive or impaired ability to respond to the insulin hormone has major implications for our health. This observation advances our understanding of how our body’s circadian rhythms impact our health.’

Researchers, who published their findings Tuesday in Experimental Physiology, gathered data from 51 participants for the study.

They were split into two groups based on what the scientists described as a ‘chronotype’ – a person’s likelihood to be active at a certain time.

Half of which were considered ‘early birds’, those who often woke up early morning and went to sleep earlier in the night.

Elderly Americans who sleep with a light on are more likely to be obese, or suffer from high blood pressure or diabetes, study finds

Sleeping with a light on can potentially increase a person’s risk of suffering multiple diet-related conditions like obesity, diabetes and high blood pressure, a new study finds.

Researchers at the Northwestern Feinberg School of Medicine in Chicago, Illinois, found that the growing amount of light sources in every day life can be not only impacting our sleep, but health as well.

Previous research from the same school has already found a link between light exposure at night and a person’s metabolism and even put them at risk of chronic disease.

Experts recommend that people make sure to turn off lights before they go to bed, especially blue colored lights which are much more stimulating to the brain.

This research also suggests that elderly Americans in general suffer more potential downsides from light exposure than their peers.

‘Older adults already are at higher risk for diabetes and cardiovascular disease, so we wanted to see if there was a difference in frequencies of these diseases related to light exposure at night,’ Dr Minjee Kim, a neurology professor at Northwestern and author of the study said in a statement.

‘Night owls’ wake up later in the day but are more likely to remain active throughout the night.

They used medical imaging to gauge body mass and composition, and sensitivity to insulin among each participant. Breath samples were used to measure a person’s fat and carbohydrate metabolism.

Fats and carbs are the bodies two primary sources of energy, as they are burned throughout the day and at a higher rate if a person exercises.

Each participant ate a set diet controlled for calories and other nutritional elements. They were also told not to eat at night so their sleeping metabolism would not impact results.

Participants were scanned at three different intervals, when resting, after moderate exercise and after intense exercise. They were followed for a week as part of the study.

Those who were active during the day were more likely to use fat as an energy source. Fat build up in the body is a known risk factor for type 2 diabetes.

The early bird age group was also more sensitive to insulin, meaning their body did not need as much to regulate blood sugar.

For comparison, the more insulin resistant ‘night owls’ would need more of the hormone to manage sugar. This is a clear risk factor for type 2 diabetes.

People who wake up and stay active earlier in the day are more likely to live lifestyles that put them at lower risk of developing the disease, researchers found.

‘We also found that early birds are more physically active and have higher fitness levels than night owls who are more sedentary throughout the day,’ Malin continued.

‘Further research is needed to examine the link between chronotype, exercise and metabolic adaptation to identify whether exercising earlier in the day has greater health benefits.’

The impact of sleep on the body’s metabolism, and specifically its ties to obesity and diabetes has been the topic of research among experts in recent months.

In a study published in July, a Northwestern team found that elderly Americans who slept with a night on at night were 82 percent more likely to be obese and twice as likely to suffer from diabetes.

Next post Miss Manners: I want the gifts I gave back to him when we were broken up