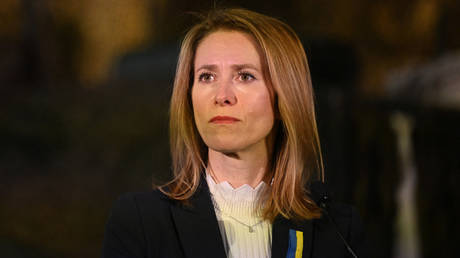 Estonia’s Prime Minister, Kaja Kallas has insisted that she’s doing a lot to help Ukraine amid its conflict with Russia and doesn’t need to travel to Kiev to prove it.

During an interview with Postimees website on Monday, Kallas was asked why she hasn’t followed in the footsteps of the leaders of Germany, France, Italy, the UK who visited Ukrainian President Vladimir Zelensky in Kiev.

“I believe that I am doing a lot for the benefit of Ukraine. I don’t need to prove anything by going to a military hotspot to once again appear in the news feeds,” she responded.

Instead of making official visits, she’ll “achieve more by talking to major allies and persuading them” to increase aid to Kiev, the PM said.

“And Ukrainians know this very well. They themselves say that there are people, who come to them only to take pictures for social media,” Kalas noted.

Estonia has been a strong supporter of Ukraine during the ongoing conflict, providing Kiev with 250 million euros worth of weapons, including Javelin anti-tank missile systems, howitzers, mines, grenade launchers, mortars and ammunition.

On Monday, Estonia, Lithuania, Latvia and Poland shut their borders to Russian travelers in response to Moscow’s military operation. Tallinn has also been calling for a full visa ban on Russians in the EU, but Brussels refrained from introducing the measure.