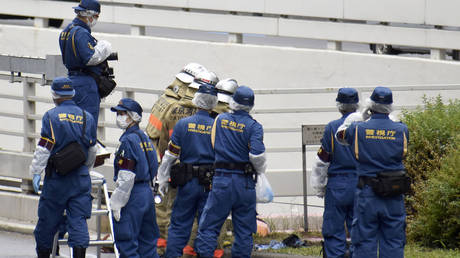 The individual “vehemently” opposed the state funeral of Japan’s former leader Shinzo Abe, according to police

Tokyo police have said a man set himself on fire in the Japanese capital to protest the upcoming state funeral of former Prime Minister Shinzo Abe, who was assassinated in July.

Japan’s longest-serving premier, Abe was shot in broad daylight during a parliamentary election campaign rally. He had stepped down as leader in 2020.

The incident occurred on a street near the prime minister’s office, police said. The man, who was said to be in his 70s, has been hospitalized with burns.

Newspaper Asahi Shimbun quoted the Tokyo Fire Department as saying a police officer suffered a burn on the arm while trying to extinguish the fire. Police said they found a handwritten note, with the message: “As an individual, I vehemently oppose the state funeral.”

Recent polls have shown that the majority of people in Japan oppose a taxpayer-funded funeral for Abe, which will take place on September 27, according to Kyodo News. Opponents argue there is no legal basis for a state funeral and that the heavily indebted government should not spend money on the event.

A petition demanding the cancellation of the state funeral reached more than 400,000 signatures earlier this month, according to Asahi Shimbun.

The funeral will cost close to $1.8 million, with some 6,000 guests expected to attend the event in Tokyo’s Nippon Budokan arena.