Unbe-leaf-able! Nature lovers share snaps of incredible trees growing over other objects – from street signs and tyres to an old tractor

By Claire Toureille For Mailonline

Trees are an incredible part of nature – but sometimes they can grow so huge, they start to outgrow even the largest objects surrounding them.

That’s the case in these amazing pictures captured by nature lovers from Poland to the US, who’ve found trees which had started to grow over objects like signs or benches and fences.

Many shared their snaps on social media, with Bored Panda collating the very best into a viral online picture gallery.

One person in Poland was left speechless after they came across a tree that looked like it was eating a statue of Jesus.

Another snap, taken in the US, revealed that a local tree had started to grow over a street sign. 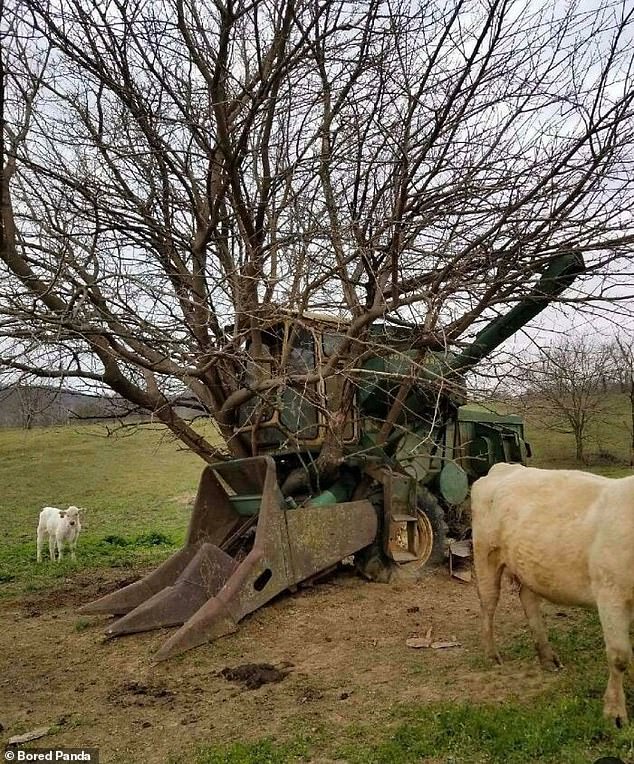 Trees are an incredible part of nature – but sometimes they can grow so huge, they start to outgrow even the largest objects surrounding them (In the US, one walker was left astonished after spotting a tractor which appeared to have been totally swallowed up by a tree on this farm) 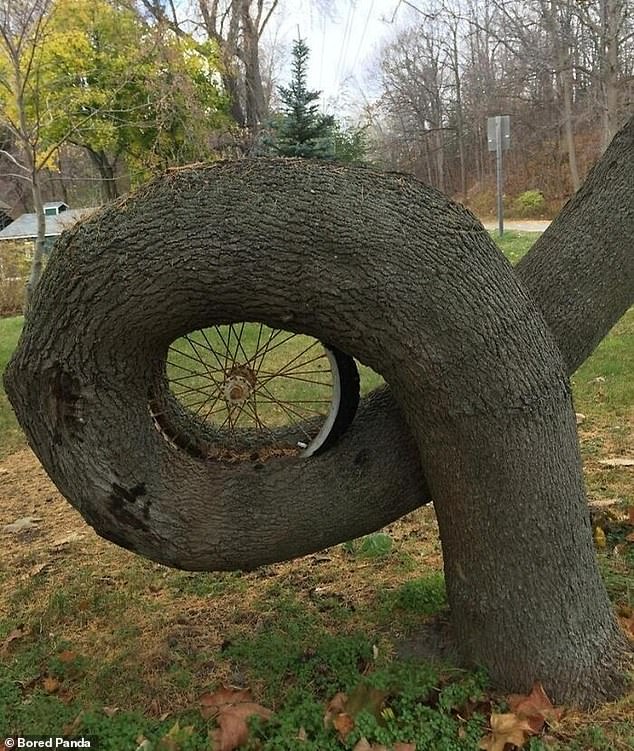 This tree trunk which shaped itself around a wheel has become a local monument in Normandale, Ontario 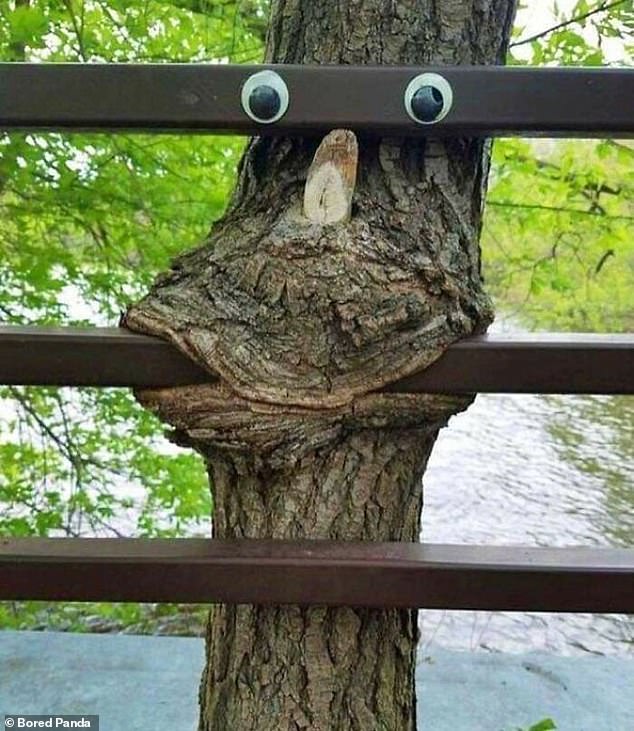 In the US, a jokester added googly eyes to make it look like the tree was eating this iron cast fence 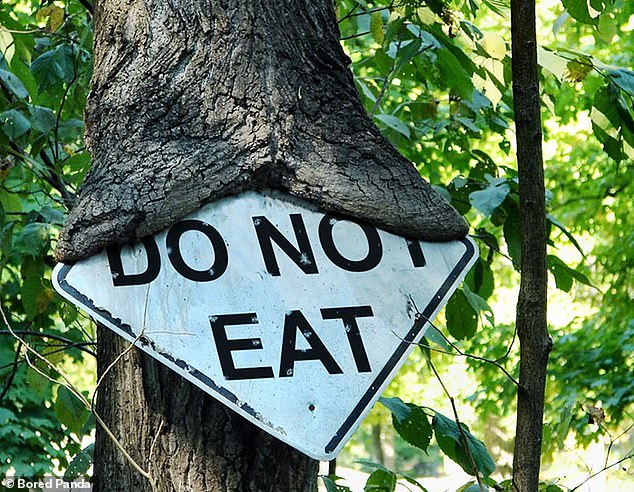 But the instructions were do NOT eat: One person who snapped a photo of a sign being swallowed by a tree trunk 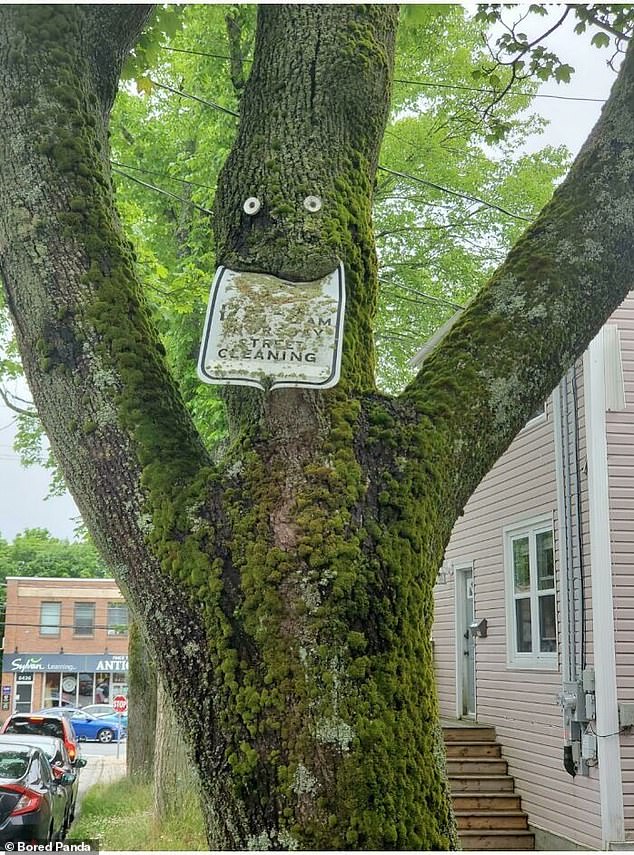 In this quiet suburb in the US, neighbours were tickled by a tree that looked as though it was eating a sign about street cleaning 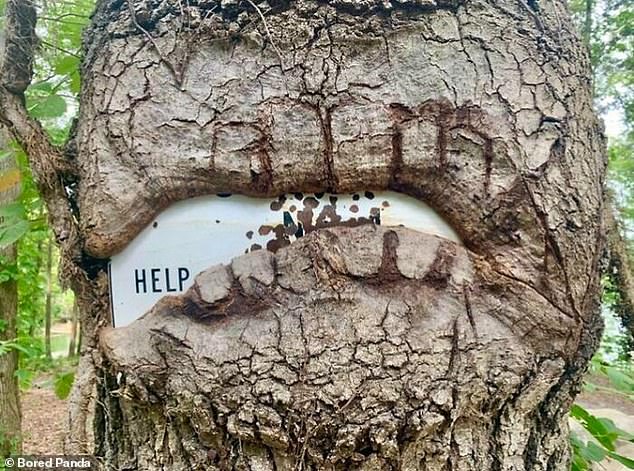 This American tree slowly took over a sign, and in a twist of fate, only the world ‘help’ could be read by passers-by 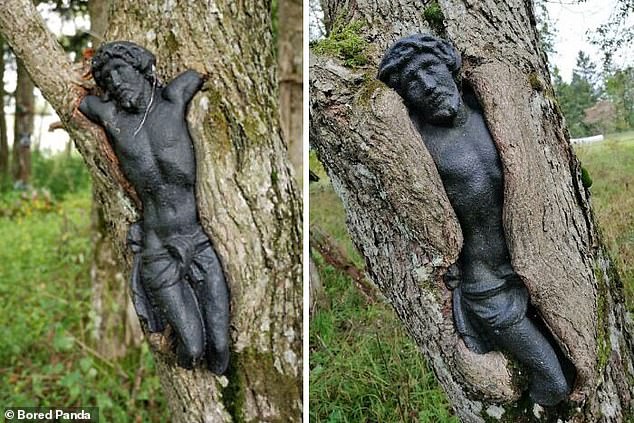 In Poland, a tree has been slowly but surely growing over this black statue of Jesus in a cemetery 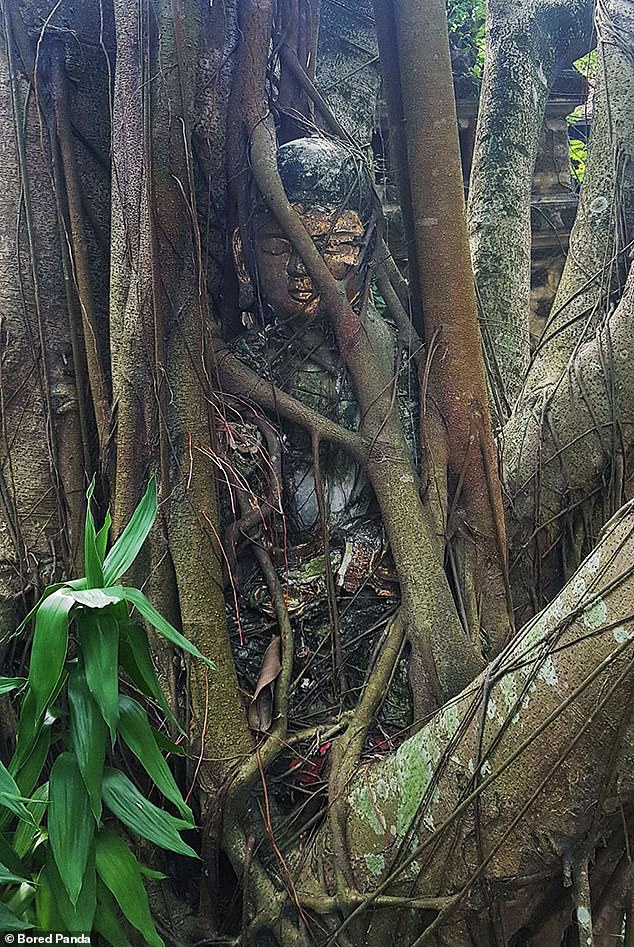 In the Pacific, this bizarre statue was taken over by the long branches and leaves in this tropical forest 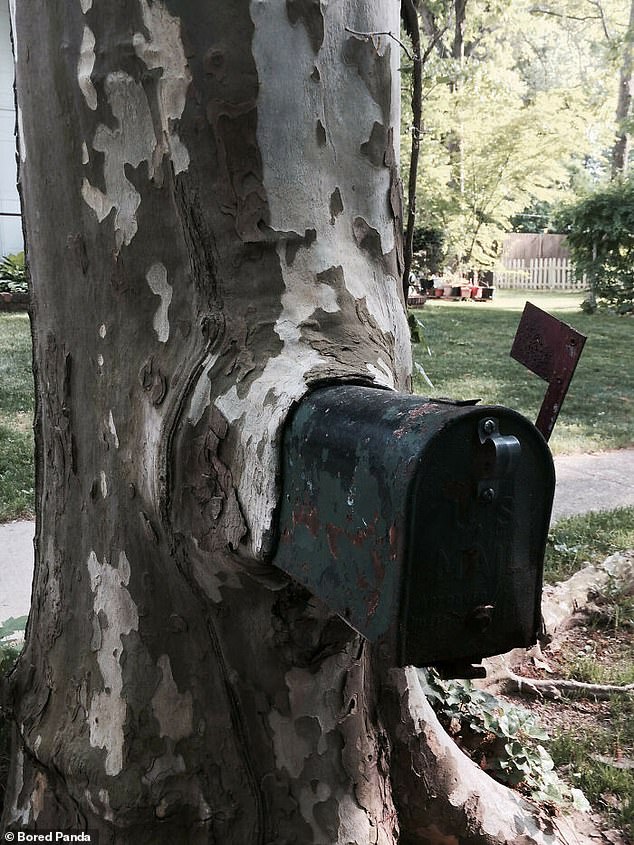 Might want to call the Postal Service! One person in the US was left baffled after this tree took over this rusty old mailbox 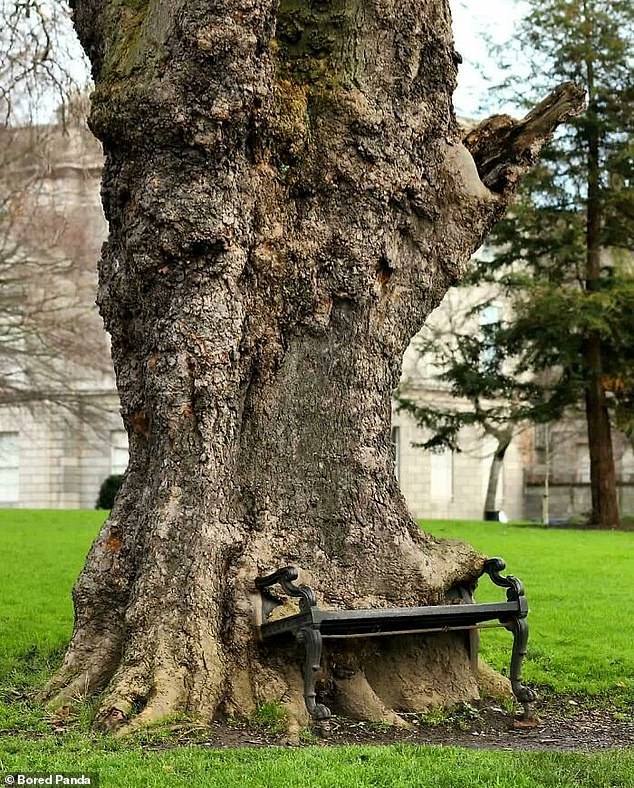 The ‘Hungry Tree,’ which looks like it’s slowly eating away at a bench, has become a fixture in Dublin 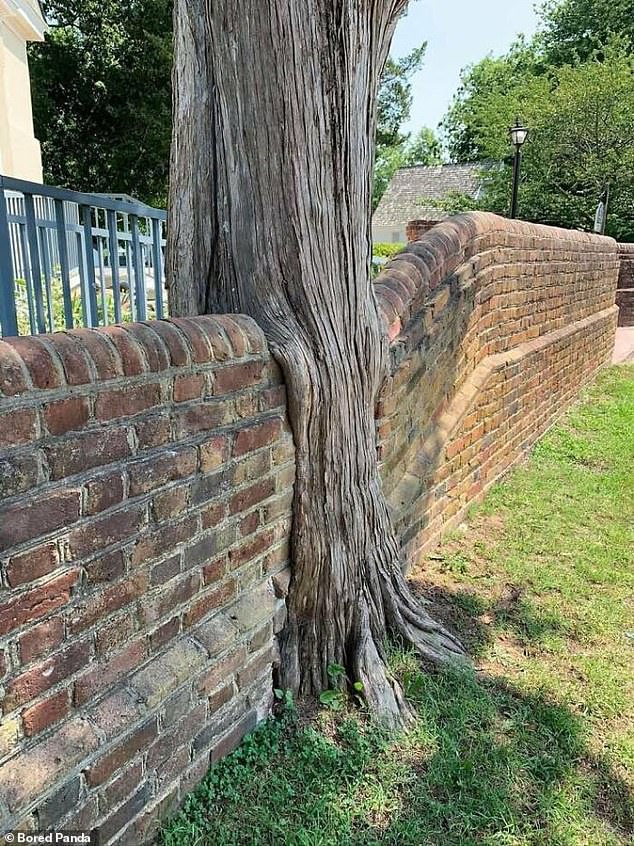 Locals built a brick fence around this tree’s base, but it eventually took over and its trunk outgrew the entire thing 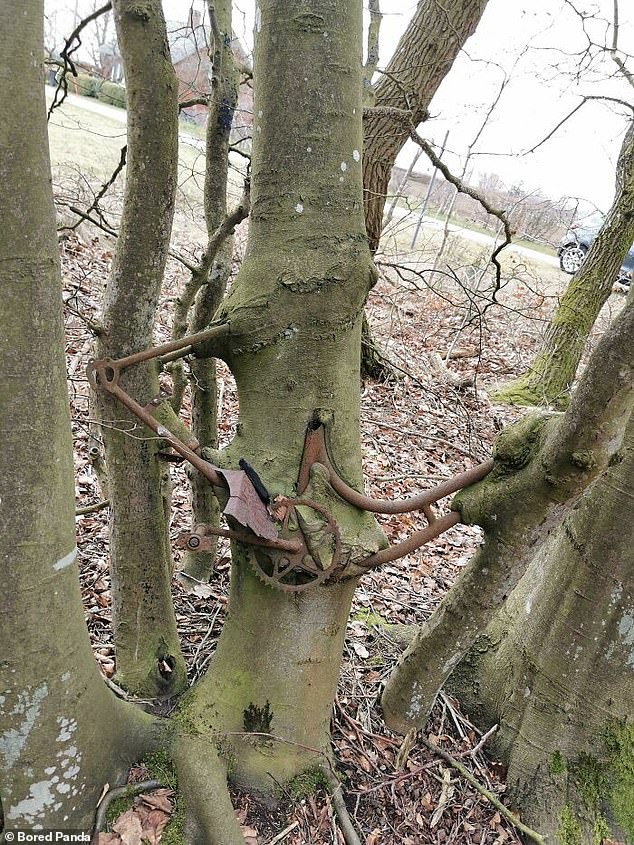 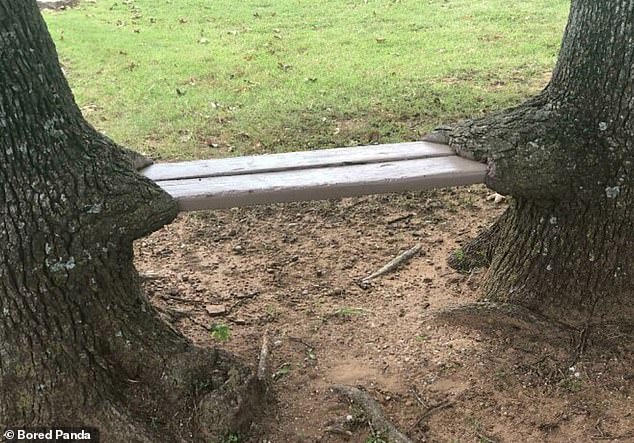 Two trees in the US began to take over this bench, making it look like they are the one holding it in place