A ‘microprotein’ significantly raises the risk of Alzheimer’s disease in later life if it is mutated, scientists say — with a quarter of those of European ancestry already having the change.

Researchers at the University of Southern California (USC), in Los Angeles, analyzed data from more than 8,000 people and found that when a protein — named SHMOOSE — was deactivated it led to a 20 to 50 percent higher risk of the condition.

Alzheimer’s disease is thought to be caused by an abnormal build-up of proteins in the brain, although what leads to this is not clear. Being older, having a family history of the disease and a sedentary lifestyle are all thought to raise the risk.

The scientists leading the paper say their study may ‘open the door’ to new treatments for combatting the disease. 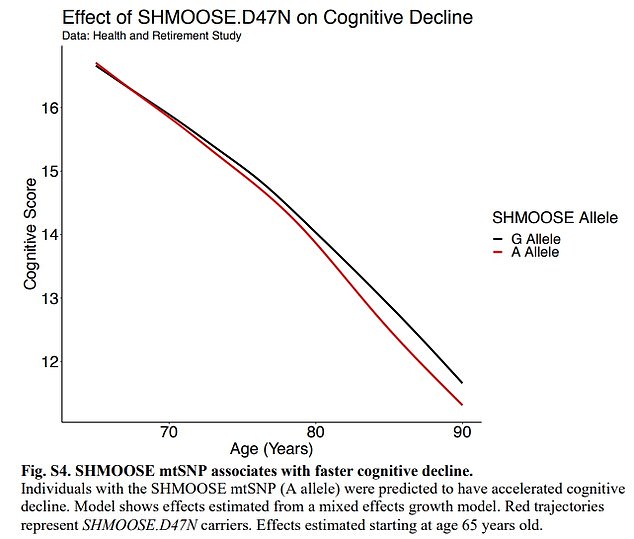 The above shows the difference in cognition among those who did not have the mutated microprotein (black line) and those that did (red line), according to a model the scientists made using their results.

A microprotein is a very small protein that is used to help in the formation of others that carry out a variety of functions — including energy production.

Previously research has only focused on about 20,000 proteins.

But now scientists are looking at the hundreds of thousands of microproteins to find causes for diseases including Alzheimer’s.

About 6 million Americans have Alzheimer’s with the figure is expected to double to nearly 13 million over the next 25 years, the Alzheimer’s Association says.

Previously, scientists have focused on about 20,000 standard-sized proteins to investigate what may cause the disease.

But now they are looking at hundreds of thousands of microproteins — much smaller versions — that could also have an impact.

In the study, published today in the journal Molecular Psychiatry, scientists sifted through genetic data from more than 8,000 people to establish if any were linked to Alzheimer’s.

They found that a mutation in one gene deactivated the protein SHMOOSE, in turn raising the risk of Alzheimer’s disease.

It also raised the risk of brain atrophy, models suggested.

It was not clear why this happened, but the protein is involved with energy production in mitochondria.

In their paper, the scientists suggested that cells could face an energy deficit due to the protein — leading them to reduce the protective coating around nerve cells raising the risk of damage.

‘Administration of SHMOOSE analogs in individuals who carry the mutation… may prove to have a benefit in neurodegenerative and other diseases of aging.’

This is the first microprotein to be linked with such a high risk of developing Alzheimer’s disease.

Previously several genes have been linked to Alzheimer’s, but they were all found to raise the risk by less than 10 percent.

The strongest link has been found in gene APOE4, with up to 60 percent of people that have two copies set to develop the disease later in life.

It is possible that other microproteins are also involved in Alzheimer’s disease, but owing to the costs the study only looked at a few.

Alzheimer’s disease is a progressive, degenerative disease of the brain, in which build-up of abnormal proteins causes nerve cells to die.

This disrupts the transmitters that carry messages, and causes the brain to shrink.

More than 5 million people suffer from the disease in the US, where it is the 6th leading cause of death, and more than 1 million Britons have it.

As brain cells die, the functions they provide are lost.

That includes memory, orientation and the ability to think and reason.

The progress of the disease is slow and gradual.

On average, patients live five to seven years after diagnosis, but some may live for ten to 15 years.