Talk about making a stylish entrance. With sails billowing in the buffeting breeze, our tall ship Star Clipper sashays like a supermodel on its approach to the glitzy Riviera playground of Monte Carlo.

As we sweep into the marina, I’m mesmerised by Monaco’s mountainous backdrop soaring above the Monte Carlo skyline of uber-modern apartment blocks and statuesque Belle Epoque buildings.

Yet as I watch a clutch of futuristic gin palaces gliding past in the marina, I can’t help feeling superior. They are mere pretenders when compared to the authentic style of our elegant barquentine. 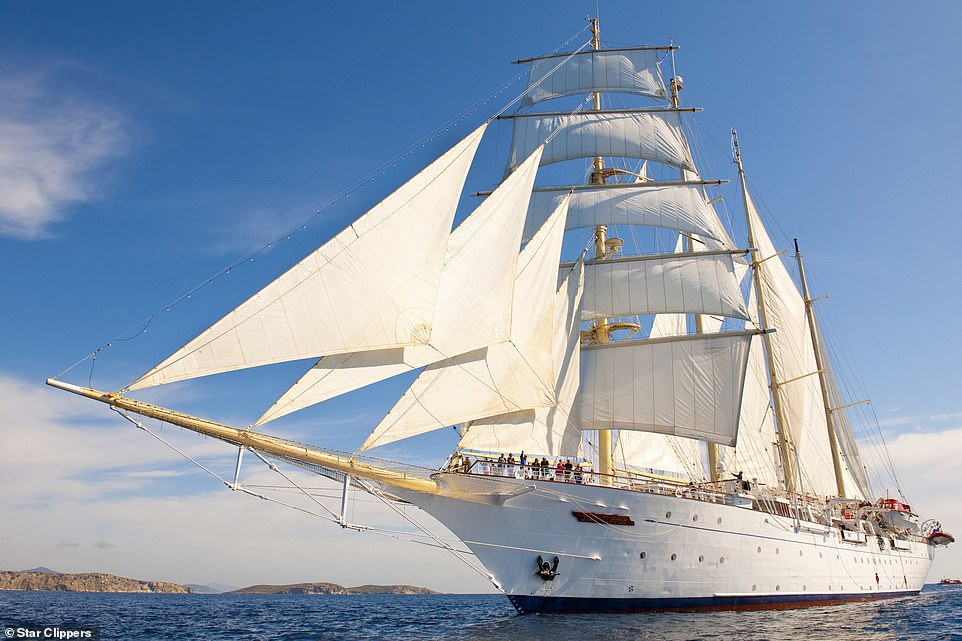 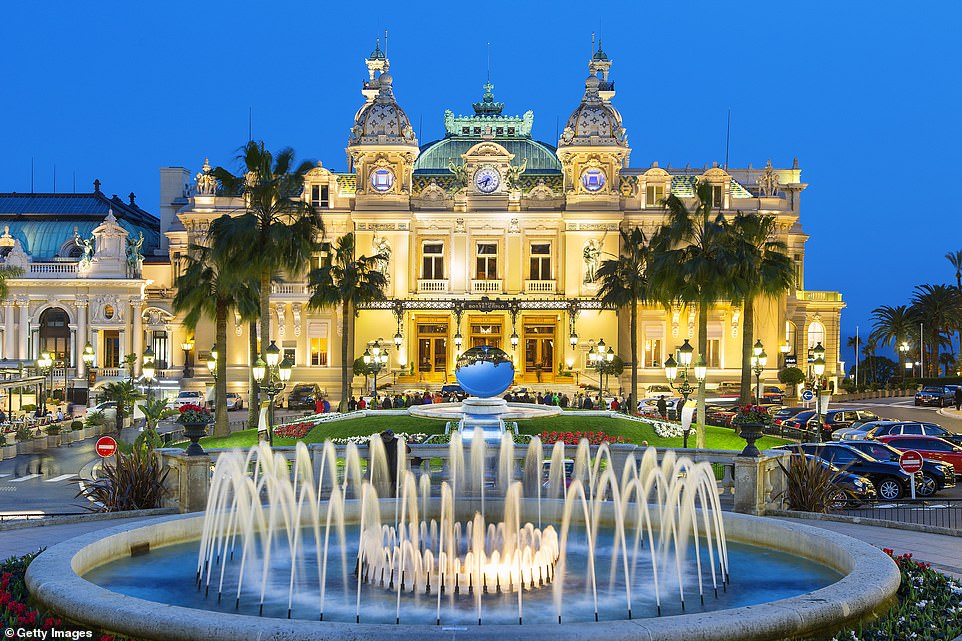 Above is Monte Carlo casino. In the city’s harbour, Sara spies ‘a clutch of futuristic gin palaces gliding past in the marina’ 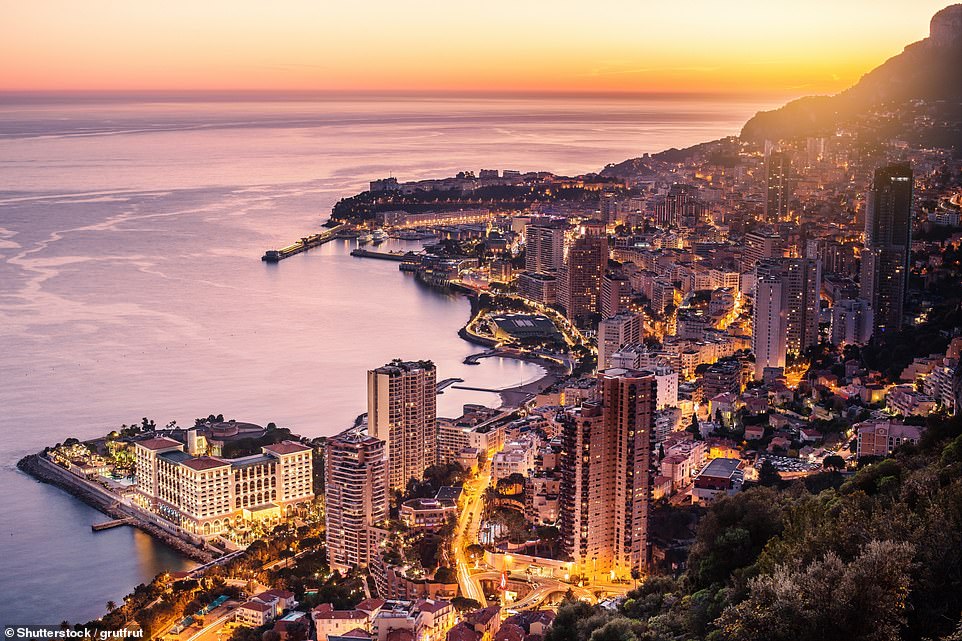 Star Clipper is as far removed from a traditional cruise experience as you can get; reliving sailing’s golden age with ropes snaking across teak decks and stretching into rigging resembling a colossal cat’s cradle, or simply coiled up like giant cobras.

Each departure is an experience to behold as crew members swarm between masts, nimbly heaving ropes around winches that whine and groan with the effort of unfurling vast sails to the stirring notes of Vangelis’s Conquest of Paradise, which plays on every sailaway.

Early mornings are another highlight during this Mediterranean sojourn along the French Riviera to Corsica when I’m often the only one treading the freshly-hosed decks. This is prime time for dolphin and porpoise-spotting and my husband, Geoff, strikes lucky when a pod of porpoises appears, diving and twisting with abandon in the ship’s prow wave. 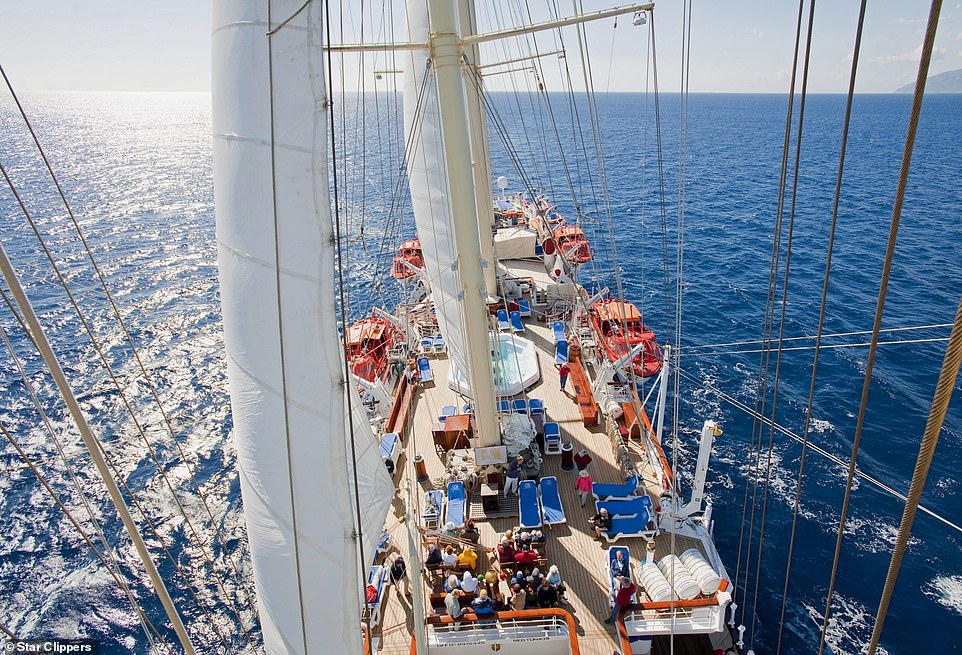 ‘Each departure is an experience to behold as crew members swarm between masts, nimbly heaving ropes around winches that whine and groan with the effort of unfurling vast sails,’ says Sara

I’m dismayed to miss such marine acrobatics, but am engaged on my own voyage of discovery. With yoga classes hosted by a charming instructor, I try her pre‑breakfast sessions on deck. I’m the only beginner and do my best to master the seemingly impossible positions. But the warmth of the sun, irresistible lapping of waves and gentle flapping of sails make this the most evocative of experiences.

Unfortunately, our twin teenage daughters do not share this enthusiasm for early rising. But once they are (finally) up, they relish ship life, with Holly and I climbing the rope ladder up the mast to the crow’s nest 65ft up, and Dani perfecting selfie poses around the deck in between chilling by one of the two small pools.

Admittedly, this isn’t a cruise suited to the very young, the elderly (most of our fellow guests are in their 60s) or anyone with mobility issues due to steep stairways and deck areas cluttered with ropes and pulleys. Yet children aged from eight upwards, and ideally teens, will relish the feeling of adventure even when capricious coastal breezes mean sails are swapped for engine power. 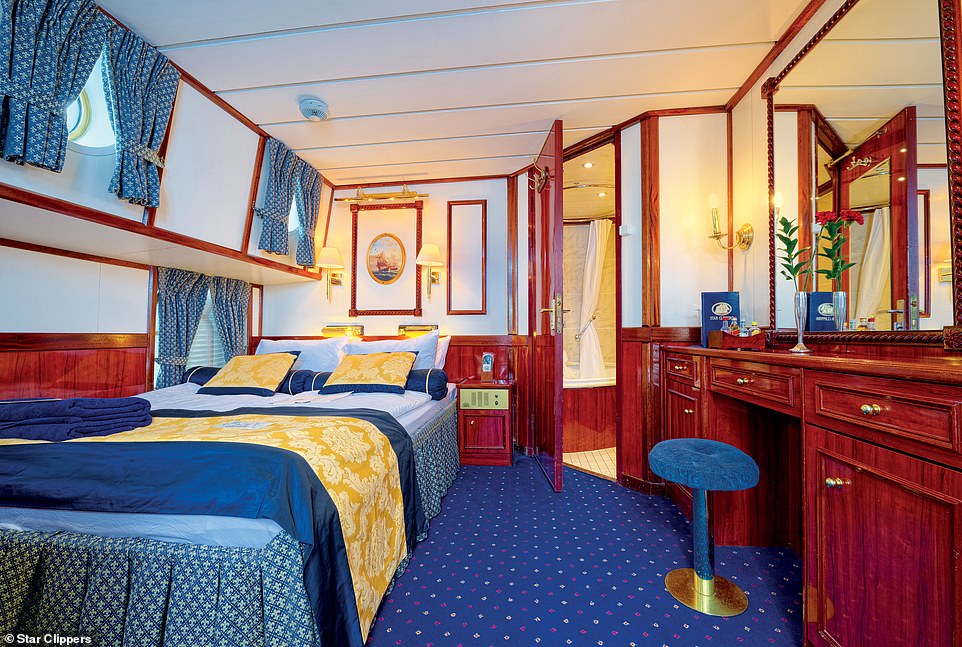 One of the ship’s cabins. Despite enjoying the scenery along the way, Sara describes the tall ship as the ‘real showstopper’ of her voyage 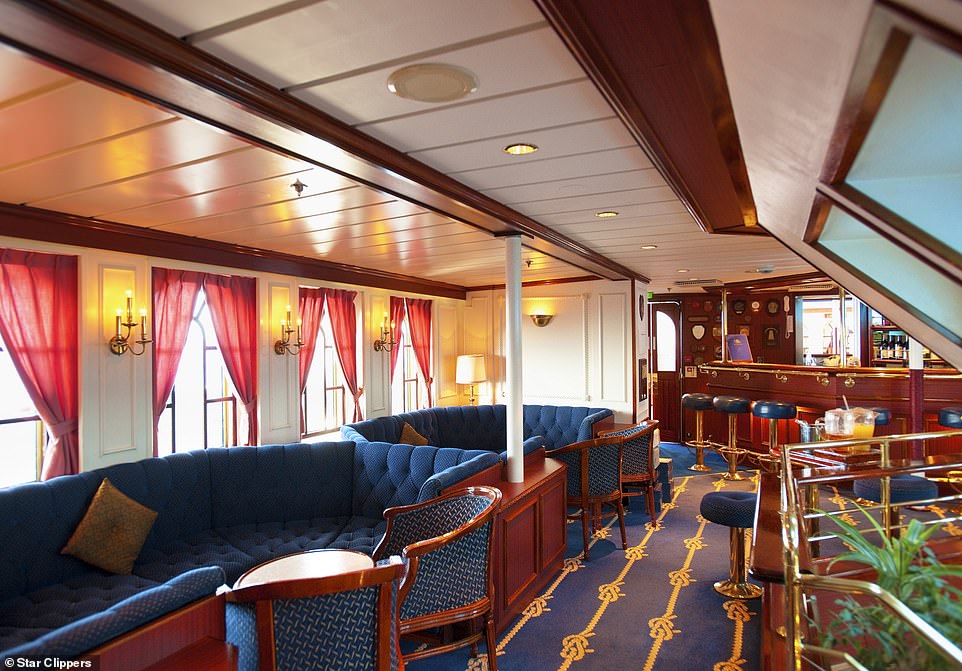 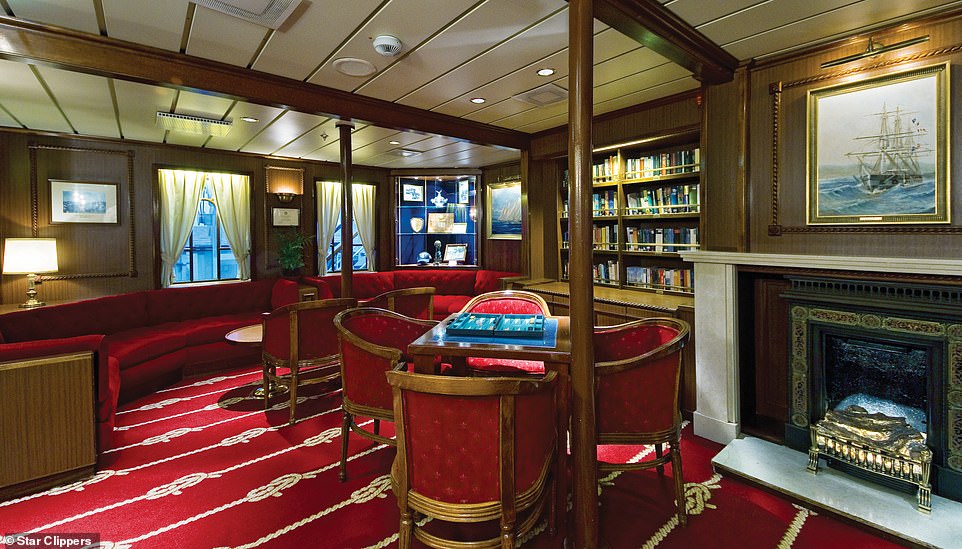 Sara reveals that because of the ship’s petite size, it can moor in the centre of small, atmospheric ports off-limits to larger ships. Pictured above is the ship’s library

Lying in the bowsprit nets at the prow, just above the waves, becomes one of our favourite pastimes, and one evening we are rewarded with perfect views of a shoal of giant yellow-fin tuna coursing through the inky depths beneath us.

Star Clipper — one of three tall ships belonging to family-owned and Monaco-based boutique line Star Clippers, established by Swedish entrepreneur Mikael Krafft — holds around 170 guests, though our sailing is less than half full, with a mix of mainly British, Australian and American passengers plus a smattering of Germans and French.

Such a cosy international mix contributes to the house-party ambience and relaxed vibe that is centred around the Tropical Bar, the ship’s de facto social hub where party nights liven up evenings.

Ship life is comfortable in a smart nautical way, with wood and brass interiors extending through the public areas and into our cabin with its small porthole and bijou ensuite. 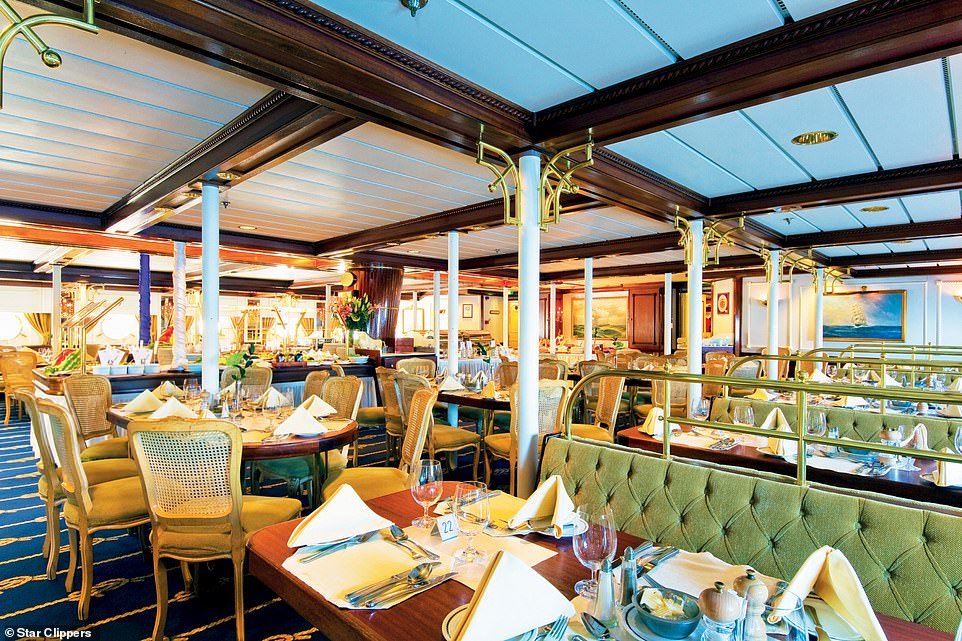 According to Sara, the dining room, pictured above, is ‘light and airy’ and meal times are a ‘treat’ 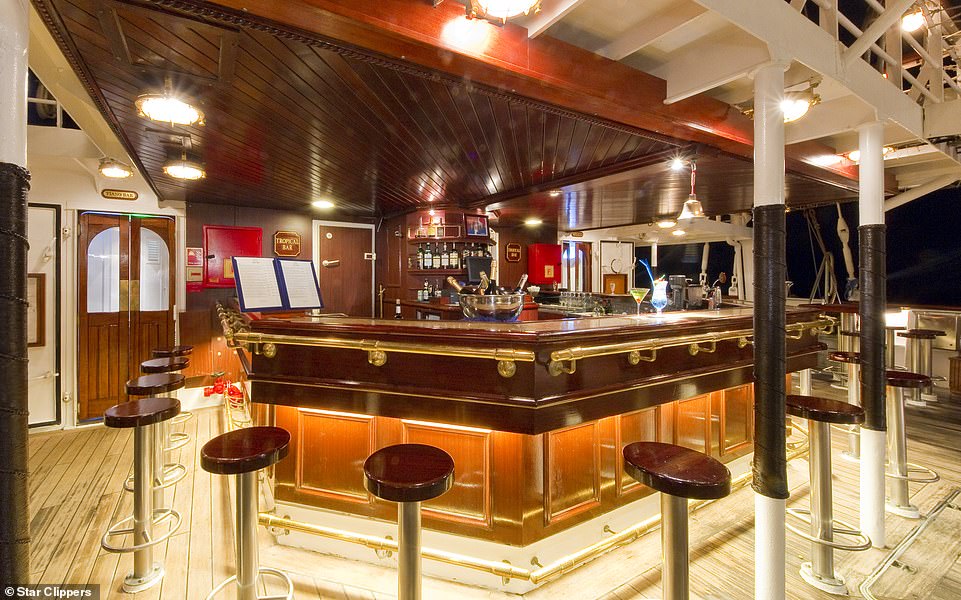 Pictured is the Tropical Bar, which Sara reveals is the ‘ship’s de facto social hub where party nights liven up evenings’ 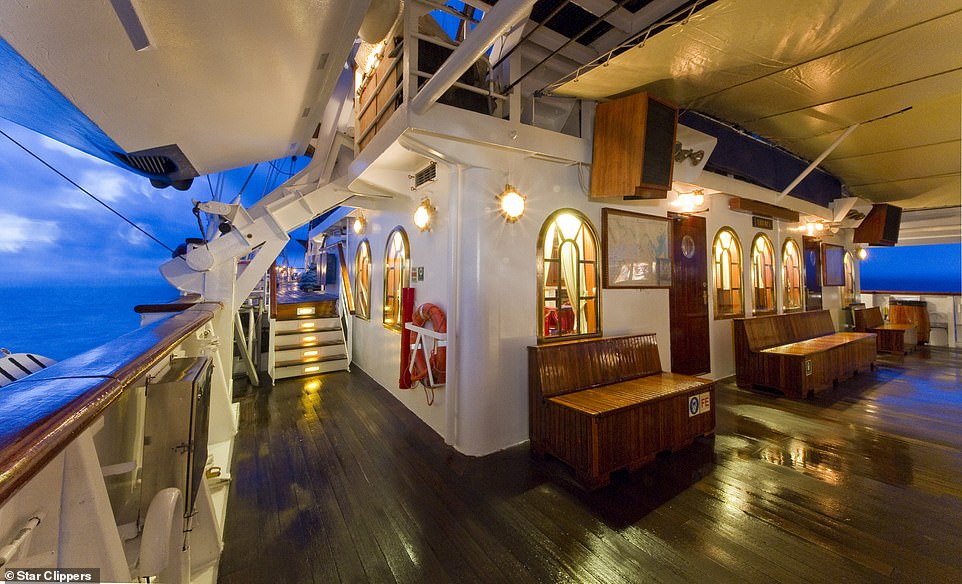 The dining room is light and airy and meal times are a treat with delicious buffet lunches, sometimes Italian or Asian-themed, and substantial five-course dinners where we feast on steak, lobster and fresh fish.

Best of all, the square rigger’s petite size means we can moor in the centre of small, atmospheric ports off-limits to larger ships, making it easy to explore under our own steam.

Corsica meets our requirements for rustic charm and rugged scenery overlaid with Gallic influences and the enduring spirit of Napoleon, whose family hailed from here. In the capital, Ajaccio, its streets lined with chic boutiques and cafes, we visit the Bonaparte family home. 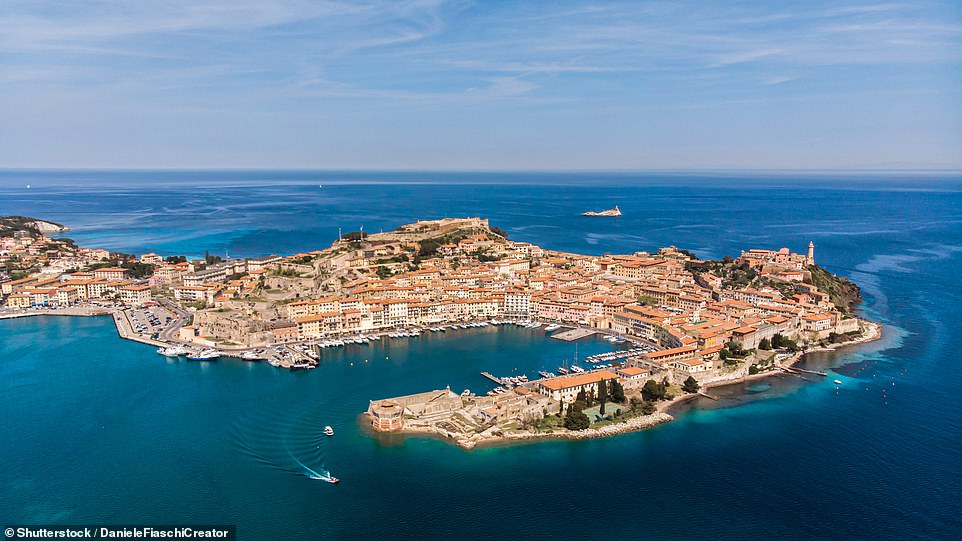 Sara enjoys ‘glorious views’ in historic Portoferraio (pictured) on the island of Elba, where Napoleon was exiled in 1814 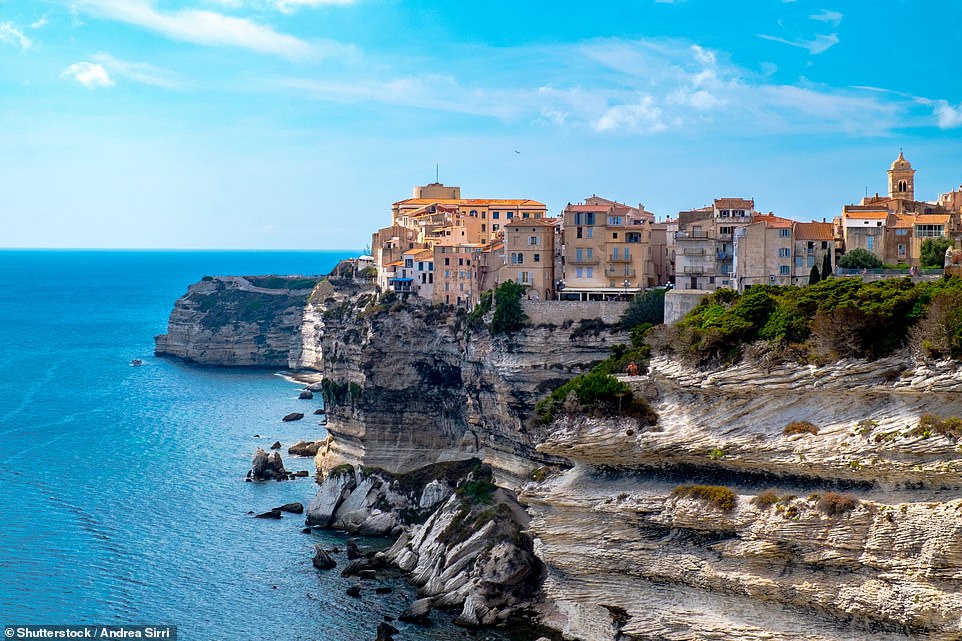 Above is the medieval Corsican town of Bonifacio, one of Sara’s favourite stops on the voyage. She says that its ‘smart marina and chi chi restaurants are a fitting foil to the winding streets of the old town and its 9th-century citadel’

Another stop takes us to Portoferraio in Elba, where Napoleon was exiled in 1814, splitting his time between two residences (now museums), before giving his British overseers the slip and fleeing after less than a year.

Such a mix of history and glorious views make this one of our favourite stops, along with the medieval Corsican town of Bonifacio, whose smart marina and chi chi restaurants are a fitting foil to the winding streets of the old town and its 9th-century citadel.

Yet, beguiling as these ports are, they can’t compete with Star Clipper, which proves to be the real showstopper of this voyage.

Star Clippers (starclippers.co.uk) offers a seven-night sailing from Cannes to Civitavecchia (Rome), including calls at Monaco, several points in Corsica and Elba, departing May 13, 2023. From £2,039pp, including flights.