Screen time CAN be good for a young brain! Watching TV with your child can boost their cognitive development, study finds

A British research team from the University of Portsmouth, on the south coast of England, performed a meta-analysis of previous studies, finding that while a young child could be harmed by too much screen time alone, having a parent watch with them is beneficial.

This is because the close-by parent can answer questions that may arise, and also converse with them. This turns the usually passive and thoughtless process of watching television into an experience that engages their thinking skills and boosts their ability to conversate.

Researchers warn that TV time should not replace other social and learning activities, and that too much screen time still does carry harms, but there are ways to turn it into a more beneficial activity. 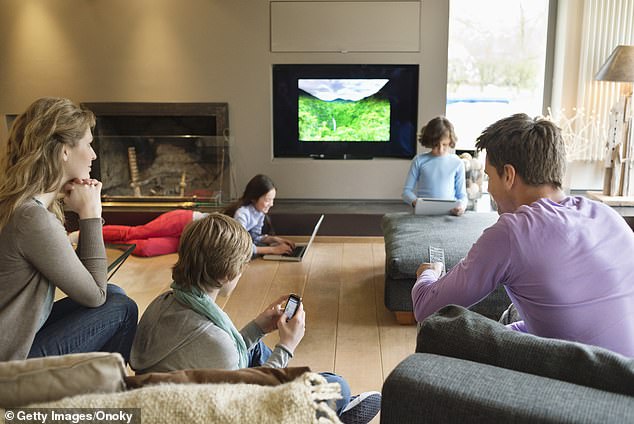 Children can benefit from watching TV with their parents if the adults in the room explain things to them and use it as an opportunity to practice conversational skills, a new study finds

‘Weak narrative, fast pace editing, and complex stimuli can make it difficult for a child to extract or generalize information,’ Dr Eszter Somogyi, from the psychology department at Portsmouth, said in a statement.

‘But when screen content is appropriate for a child’s age, it’s likely to have a positive effect, particularly when it’s designed to encourage interaction.’

The research team, which published its findings Wednesday in Frontiers in Psychology, analyzed 478 studies from over the past 20 years for their paper.

Each included study examined the impacts that watching TV or regular use of a device like a cellphone had on a child’s development.

Canadian academics say there is a ‘lack of consensus’ on whether too much screen time has a detrimental effect on youngsters.

But having reviewed 87 old studies on the topic, they’ve now ruled down in favor of it being bad for their behavior.

They were also more likely to suffer bouts of aggression or inattention, two signs of externalizing behavior.

Although only ‘small but significant’, University of Calgary scientists claimed the link could still have ‘meaningful consequences’.

But they did not quantify the exact risks, nor did they specify how many hours of TV children should be limited to.

Many believe the screen exposure is bad for children. It can slow down their brain development as it keeps them away from taking part in activities that keep their brain busy.

Children who watch more TV often have worse diets and more problems with weight because of the sedentary nature of the activity.

Staying inside and watching television for much of the day also keeps children away from interacting with one-another, harming social development as well.

All of these factors were found to be true in the meta-analysis, with studies finding many times over that young children were being harmed by too much TV time.

Researchers also wanted to investigate whether the quality of the time spent in front of the screen mattered for how it affected the brain.

‘We’re used to hearing that screen exposure is bad for a child and can do serious damage to their development if it’s not limited to say less than an hour a day,’ Somogyi added.

‘While it can be harmful, our study suggests the focus should be on the quality or context of what a child is watching, not the quantity.’

Other studies examined by the research team found that informative programing could have a positive effect for children.

A parent or caregiver being in the room had great benefit as well if the adult took a more active role, and used the time as an opportunity to teach their child rather than just allowing it to be an idle activity.

‘These differences in the viewing context play an important role in determining the strength and nature of TV’s impact on children’s cognitive development,’ Somogyi said.

‘Watching television with your child and elaborating and commenting on what is viewed can help enhance their understanding of the content, reinforcing their learning during educational programs.

‘Co-viewing can also contribute to the development of their conversation skills and provides children with a role model for appropriate television viewing behavior.’

Researchers say that more modern devices that are oft-maligned in parenting – and for good reason much of the time – can be used as tools instead.

“I am optimistic with the concept of finding an equilibrium between the rapid spread of new technological tools and the preservation of the beautiful nature of human relationships,’ Dr Bahia Guellai, a researcher from the department of psychology at Paris Nanterre University said.

Next post The latest on Donald Trump investigations: Where they stand