Marking its 200th anniversary this year, the calmly winding Union Canal provides a smooth route for narrowboats to navigate — but there have been choppy waters in its history.

The canal opened in 1822 and was used to haul coal to Edinburgh along a 31-mile course that starts in Falkirk. For 20 years, it enjoyed a boom time, then disaster struck: the coming of the railway.

The opening of the Edinburgh and Glasgow line in 1842 cast doubt on the need for the Union Canal and, eventually, after staggering along with limited services for years, commercial operations ceased in 1933. 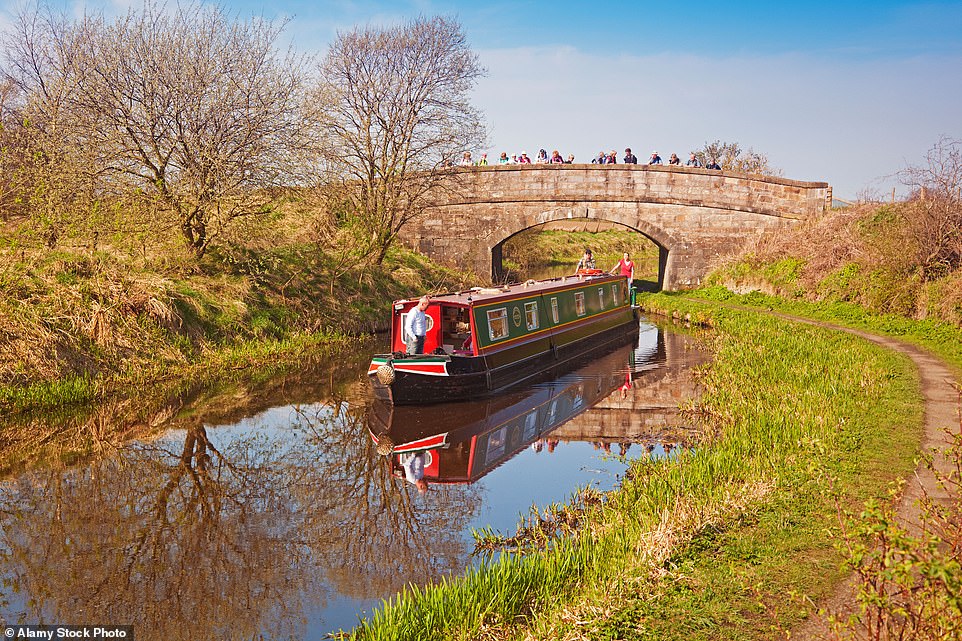 Serene: Tom Chesshyre explored Scotland’s historic Union Canal by boat, sailing from Falkirk to Edinburgh. Pictured is a section of the waterway near the village of Ratho (file photo)

Locks were filled in and the canal was silted up. Then a miracle happened: £32 million from the National Lottery-funded Millennium Commission plus further fundraising resulted in the clearing of the waters and the creation of an extraordinary mechanical link, known as the Falkirk Wheel, to replace a series of steep locks.

The Union Canal was back in business. But instead of coal, the cargo these days is tourists. You learn all this and more at the waterside Canal Museum at Linlithgow, on the route to Edinburgh.

An eight-minute walk away is Linlithgow Palace, created by James I in 1424 as a ‘pleasure palace’ — rather than a castle with fortifications — to impress his nobles and assert his authority. It is halfway between Edinburgh and Stirling and sits beside a picturesque loch. 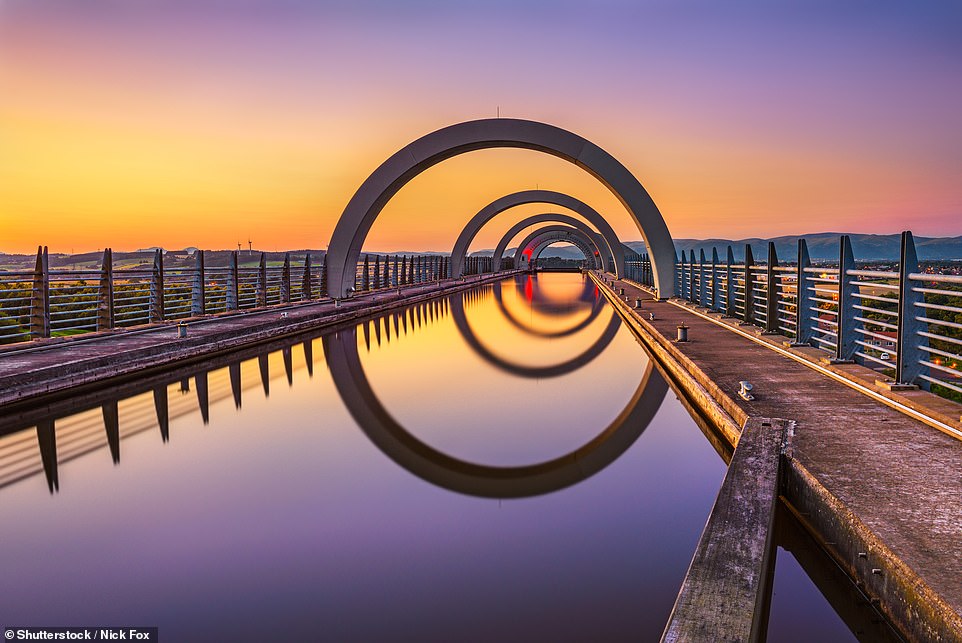 The Union Canal was transformed with the creation of an extraordinary mechanical link, known as the Falkirk Wheel (pictured), to replace a series of steep locks, Tom reveals 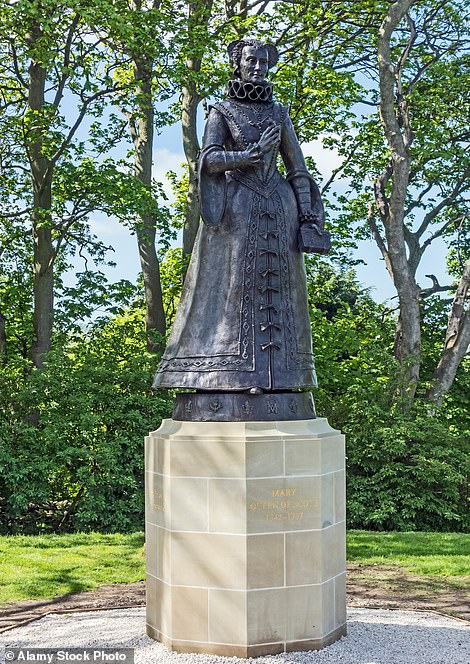 Tom stopped at Linlithgow to explore Linlithgow Palace, where Mary, Queen of Scots was born in 1542.’There’s a statue of her (above) at the front,’ he says

His scheme worked, with future kings also enjoying its effect: James IV welcomed the Spanish ambassador there, while James V built a grand gateway in order to make the entrance to the royal court even more impressive.

This was where the kings and queens of Scotland in the 15th and 16th centuries came to play.

Mary, Queen of Scots was born at the palace in 1542, and there’s a statue of her at the front.

Sadly, in the 17th century the palace was more or less abandoned and it is now a shell of its former self.

To reach its fenced-off remains you walk down a hill from the canal and through the heart of Linlithgow — a square known as The Cross.

This meeting place has seen markets, public proclamations and executions over the years. On one side was once the Golden Cross Tavern, where the poet Robert Burns attended a meeting of the local Masonic Lodge in 1787.

All that remains of this today is a carved stone pediment fixed to a modern building. But there are plenty of other inns — the Four Marys serves decent ales and hearty haggis-and-potato pies. It’s named after four ladies-in-waiting to Mary, Queen of Scots and the building dates back to the 1500s. 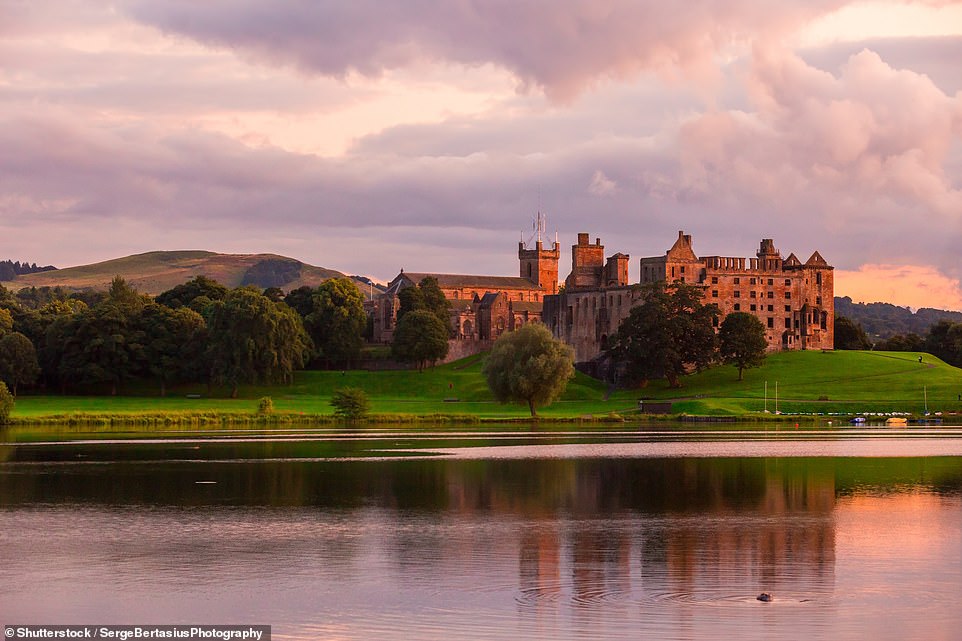 Linlithgow Palace, pictured, was created by James I in 1424 as a ‘pleasure palace’ — rather than a castle with fortifications — to impress his nobles and assert his authority, Tom explains

Pubs tend to be a big feature of journeys along the Union Canal, as narrowboat holidaymakers will confirm. We certainly found this to be true when we took to the water on our boat the Madeleine, a feisty 62 ft vessel from the well-run Black Prince rental firm.

There is no shortage of fine hostelries here. The boisterous and welcoming MBK Canalside inn on Redding Road tells on one of its walls the story of a tragedy in 1923 at the nearby Redding Colliery, where 40 men died when the mine flooded from old workings.

Meanwhile, the Tally Ho at Winchburgh serves excellent fish and chips, and The Bridge Inn at Ratho has great canalside views.

Part of the joy of the Union Canal is the almost complete absence of locks, other than a couple near Falkirk. So it’s a great choice for narrowboat novices (as we were).

There is also a pleasurable learning curve in steering with the tiller, mooring, clearing the ‘weed hatch’ each morning and checking that the metal vice above the hatch was tightly secured.

‘Without that, you could sink the boat,’ said the cheerful (and wry) Scottish Canals employee before we set off. ‘That would not be an ideal situation.’

But what really makes the Union Canal is the arrival into Edinburgh.

Would the canal founders from 1822 believe their eyes if they saw the waterway winding beneath bridges carrying dual carriageways, sliding between housing estates and finishing up beside the gleaming modern apartments by Leamington Lift Bridge, with Edinburgh Castle obscured up above on its hill? Hardly.