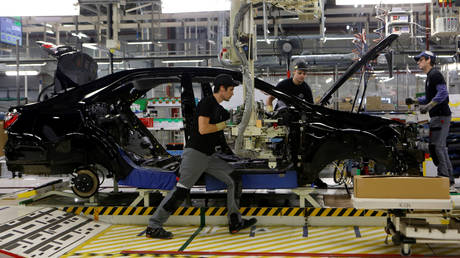 Japanese automaker Toyota has decided to shut down its plant in St. Petersburg, Russia’s Ministry of Industry and Trade said in a statement on Friday.

The company vowed to fulfill all of its social obligations and promised extra payouts to its employees, according to the statement. The automaker will continue to provide after-sale services of Toyota and Lexus cars and maintain a dealer network in the country.

The news was first reported earlier on Friday by the newspaper Kommersant, citing sources in the company. According to the report, production of Toyota cars will not be resumed on-site, but the move to close the facility does not mean the automaker is completely leaving Russia.

Operations at the Toyota plant were suspended back in March due to supply-chain disruptions amid the Ukraine conflict. At the same time, the company stopped importing vehicles into Russia.

The plant, which made the Camry and RAV4 Toyota models, had capacity to produce 100,000 cars per year. According to Kommersant’s sources, the plant will be preserved and may be sold in the future. The ministry said that the regional authorities were working on possible ways to make use of the site.

Toyota did not respond to media requests for comment.

The automaker is not the first to suspend operations in Russia since the start of the military operation in Ukraine. Volkswagen, Nissan, Mitsubishi, Volvo, and several others have halted their Russian operations since February 24.

Previous post Why you should visit Ghent, a hip, historic and green Belgian city