Why you could have high blood pressure and not even know it! One in eight adults suffer spikes at NIGHT that are missed by daytime readings, study suggests

Millions may be suffering from high blood pressure without knowing it because their levels only spike at night, research suggests.

An Oxford University study found one in eight people aged 40 to 75 had hypertension in the evening that would be missed by a daytime GP appointment.

Having high blood pressure raises a person’s risk of heart attacks, strokes and even death — especially if it is left untreated.

Healthy people usually see their blood pressure drop at night as the body winds down and prepares to sleep.

But researchers found the opposite happens in 15 per cent of people.

But the team at Oxford say ambulatory monitoring – when a cuff is worn over a 24-hour period – should be used more often. 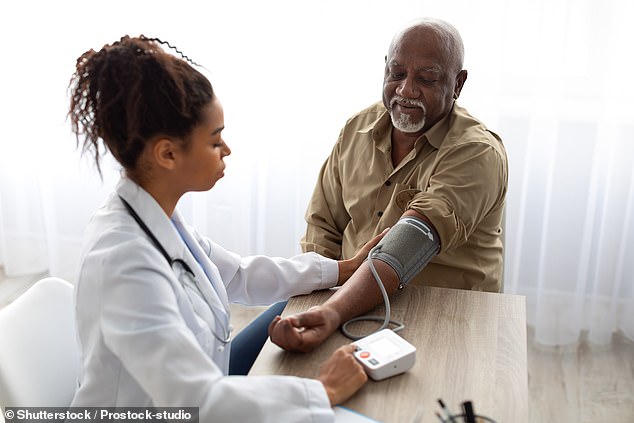 ‘Blood pressure follows a cyclical pattern over 24 hours. Normally, it goes down at night during sleep and then rises after waking.

‘For ‘reverse dippers’ – mostly elderly people, sometimes with diabetes or kidney disease – the pattern is reversed. The blood pressure goes up at night, and then decreases after waking.

‘This means that ‘reverse dippers’ have their lowest blood pressure during the day, and so they will be falsely reassured by daytime monitoring at home or in the GP clinic.’

The study involved around 21,000 patients from 28 GP practices and four hospitals in the Oxford area.

In patients admitted to hospital, researchers found nearly half (49 per cent) of these patients were ‘reverse-dippers’.

Around 15 per cent of participants in the community had high blood pressure at night.

Across both hospital and community patient groups, one in three reverse dippers had at least one cardiovascular disease.

GP Laura Armitage, a research fellow at the University of Oxford’s Nuffield Department of Primary Care Health Sciences, added: ‘Our research shows that measuring night-time blood pressure could help identify the one in eight adults in England who have undiagnosed hypertension.

‘Importantly, this would also lead to a reduction in cardiovascular disease and death.

‘This highlights the need for GPs to offer 24-hour blood-pressure assessment to their patients.’

The research was published in the British Journal of General Practice.

WHAT IS HIGH BLOOD PRESSURE AND WHAT DOES IT MEAN FOR MY HEALTH?

High blood pressure, or hypertension, rarely has noticeable symptoms. But if untreated, it increases your risk of serious problems such as heart attacks and strokes.

More than one in four adults in the UK have high blood pressure, although many won’t realise it.

Blood pressure is recorded with two numbers. The systolic pressure (higher number) is the force at which your heart pumps blood around your body.

The diastolic pressure (lower number) is the resistance to the blood flow in the blood vessels. They’re both measured in millimetres of mercury (mmHg).

As a general guide:

If your blood pressure is too high, it puts extra strain on your blood vessels, heart and other organs, such as the brain, kidneys and eyes.

Persistent high blood pressure can increase your risk of a number of serious and potentially life-threatening conditions, such as:

Next post Mars is already TRASHED: Humans have left more than 15,000 pounds of debris on the Red Planet