A future cure for paralysis? Scientists discover way to repair axon fibers in the nerves of a damaged spine that do not regenerate naturally

Scientists have found a way to repair fibers damaged fibers in the spine that do not repair themselves after significant injury in what could be a major step towards reversing some forms of paralysis.

A team from the Imperial College London, in England, were able to stimulate the regeneration of axon fibers in the spine of mice three months after they had suffered a devastating spinal injury that left them unable to walk. These fibers have no regenerative properties and will

While the mice did not regain their ability to walk, this is the first time doctors have been able to repair these fibers in the spine, opening the door for further research into fixing damage caused by spinal cord injury (SCI).

An estimated 300,000 Americans are suffering from SCI, with around 18,000 cases being recorded each year. While physical therapy and other forms of treatment can help a person slowly regain some function, there are not reliable ways to repair a damaged spine and cure a person’s SCI-related paralysis. 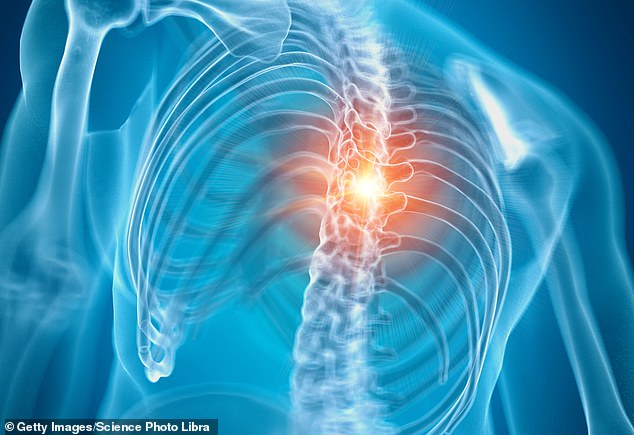 Researchers found that the molecule TTK21 could repair axons in the spine, which do not usually regenerate after a severe spinal injury. Mice included in the study who did see their spines recover did not regain the ability to walk, though (file photo)

In a study published in PLOS on Tuesday, researchers tested whether the molecule TTK21 could be used to activate axon regeneration in mice suffering from SCI.

In previous studies, researchers found that the molecule would was up to the task if applied shortly after injury, but there was no existing data on whether it would be effective for chronic SCI.

Each of the mice were treated for ten weeks, half with TTK21 and the others with a control treatment.

After completion of treatment, researchers found that new axons were sprouting in the spinal cord.

Axons are fibers that are responsible for carrying signals and impulses between nerve cells.

When damaged, the body can no longer send signals from the brain through the nervous system, making motor functions impossible.

Spinal cord injury (SCI) can be devastating, and often occur as a result of a traumatic injury

There are two primary forms of paralysis caused by SCI, quadriplegia and paraplegia

A quadriplegic suffers damage to all four of their limbs and many of their organs. The paralysis affects almost the entire body

Around 300,000 Americans are suffering from SCI, with around 17,000 others suffering a devastating injury each year

They do not repair themselves when damaged, making injury to the nervous system – and specifically the spinal cord where many nerves are linked to brain – both permanent and devastating.

Axons that were affected by the injury stopped retracting as well, and growth in sensory axons among the treated mice increased as well.

Unfortunately, despite the axon growth, the paralyzed mice did not regain the ability to walk, and showed no actual improvements in motor function.

Researchers are still hopeful that TTK21 can serve as a base for treatment for paralysis in the future.

‘This work shows that a drug called TTK21 that is administered systemically once/week after a chronic spinal cord injury (SCI) in animals can promote neuronal regrowth and an increase in synapses that are needed for neuronal transmission,’ Simone Di Giovanni, lead researcher from the college, said in a statement.

‘This is important because chronic spinal cord injury is a condition without a cure where neuronal regrowth and repair fail.

‘We are now exploring the combination of this drug with strategies that bridge the spinal cord gap such as biomaterials as possible avenues to improve disability in SCI patients.’

Spinal injuries are devastating and more frequent than some may believe. The Miami Project reports that around 300,000 Americans are currently living with a spinal injury.

Around 17,000 others will suffer an injury each year. A vast majority of cases, 80 percent, are among males.

In 20 percent of cases, the injured person will suffer complete paraplegia – totally losing motion below the waste.

Currently, there are no medicines to treat SCI, and instead patients are subject to years of physical therapy if they hope to recover.