Travelling through South America is an amazing privilege, each day rich with experiences. Covering more than 4,000 miles over many months, my journey for my new TV series began in Venezuela in the far north and ended in Tierra del Fuego in Chile and Argentina at the southern tip.

In between, there were so many adventures from Brazil to Bolivia, Paraguay to Peru, Suriname, Guyana and French Guiana.

These days, most travellers tend to go to one place on trips abroad, but exploring a whole continent provides a great sense of satisfaction. It’s a throwback to an older type of journey, where people would go on explorations and come back with tales from afar. As a traveller you obviously want to see the sights — the magnificent waterfalls of Venezuela, the famous Inca ruins at Machu Picchu in Peru, and the great beaches of Rio de Janeiro. 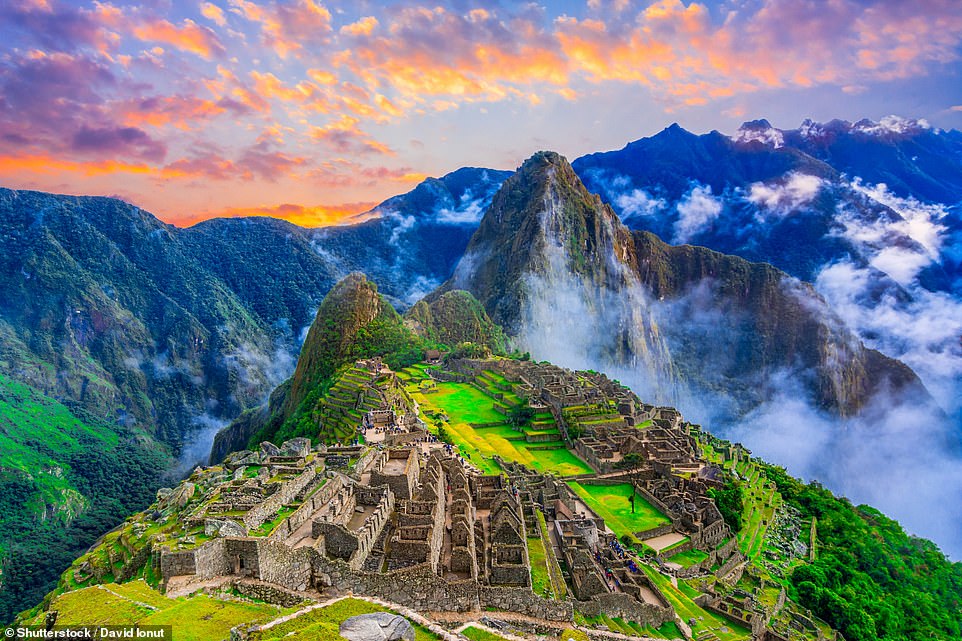 Adventures await: Simon Reeve travelled from the north to the southern tip of South America while filming a new TV series. He says that while he wanted to see the sights, such as Machu Picchu in Peru (above), he also got the chance to ‘get beneath the skin’ of the continent’s countries 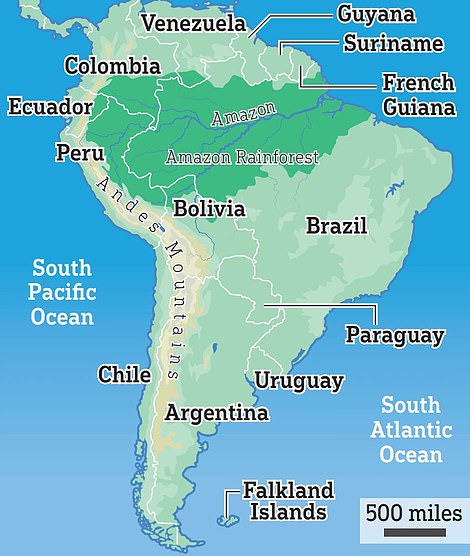 On the left is Simon Reeve at Machu Picchu. ‘Travelling through South America is an amazing privilege,’ he says, adding that he enjoyed ‘so many adventures from Brazil to Bolivia, Paraguay to Peru, Suriname, Guyana and French Guiana’

But this journey gave me the chance to get beneath the skin of the countries, too. Highlights included canoe trips through semi-lawless gold-mining regions; stays with remote Amazonian communities; interviews with warlord football club owners; a night spent in a metal tube tethered to a mountain in the Andes and, even, an eventful police raid of a Peruvian cocaine laboratory. Not recommended for regular package holidays.

The trip shone a light on the pressures on indigenous people to achieve equality in many of the countries, as well as the often-hard reality of life in sprawling cities. Then there are the environmental strains caused by money-grabbing logging and mining companies, with some species under threat, including jaguars, sloths and beautiful, diminutive golden lion tamarin monkeys.

The sloth, by the way, is a ludicrous but brilliant creature, with many existing in Suriname — they are said to only descend from their sleepy treetops once a week to defecate in the forest, apparently losing up to a third of their weight when they do.

My journey had plenty of ups (paragliding off the coast by the Atacama Desert) and downs (I fell badly ill in Peru). 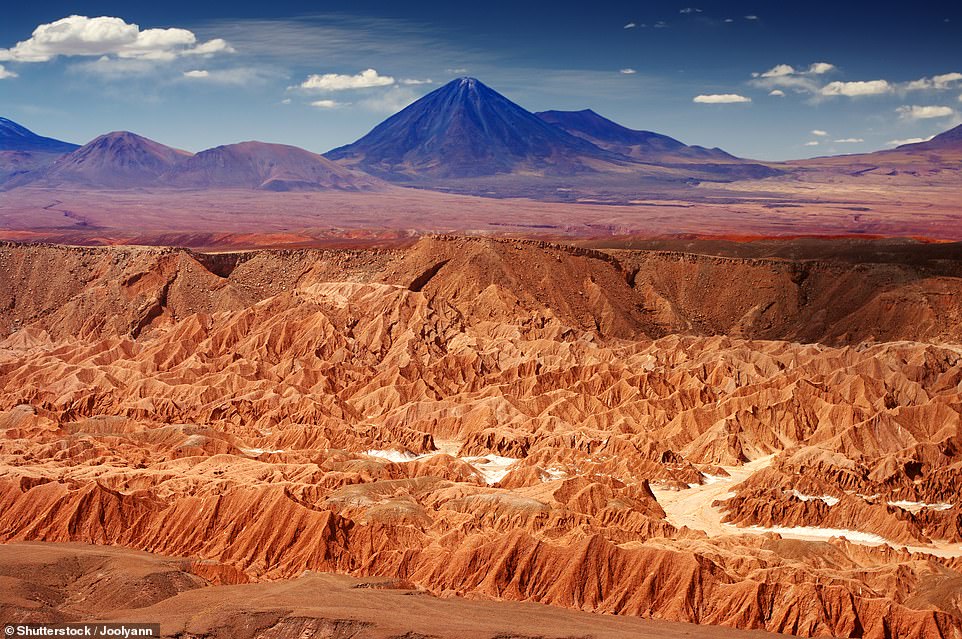 Yet despite challenging moments along the long dusty roads, joyful memories come mainly to the fore: a New Year ceremony with the Mapuche people in Patagonia — eating delicious pancakes at dawn — and a visit to a Waiapi village in Brazil, where traditional ceremonies included displays with arrows and dances. One day, I would like to take my son there.

INTO THE GUIANA SHIELD 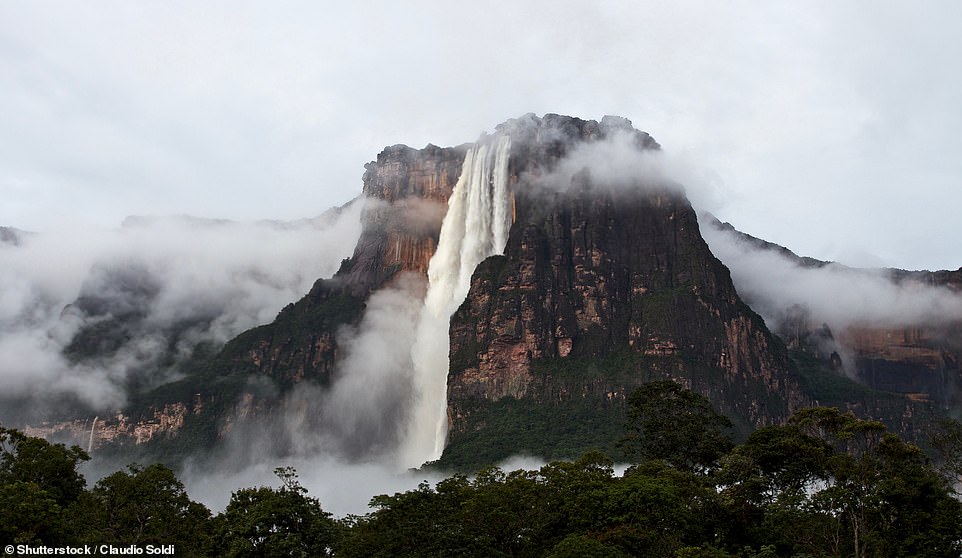 The section of the Earth’s crust in the north-east of South America, from the spectacular tabletop Mount Roraima in Venezuela through Guyana, Suriname and French Guiana, is known as the Guiana Shield.

It contains one of the world’s most eco-diverse rainforests and is famous for its waterfalls, especially Angel Falls in Venezuela — the world’s highest at 979 metres. Mount Roraima is nearly two miles above sea level and so out of the way that it was the inspiration for Sir Arthur Conan Doyle’s The Lost World.

Guyana is just as breathtaking, with its vast rainforests and remote winding rivers. It’s the only English-speaking country on the continent, with impoverished jungle settlements as well as wealthy politicians in its capital, Georgetown — where it is rumoured that an oil boom could soon make some even richer.

In Suriname, I visited a vast gold mine in the jungle once owned by the country’s vice president, where the jobs are welcomed but the damage to the rainforest is enormous.

Meanwhile, in French Guiana, a department of France where the euro is the currency, I joined a jungle patrol led by the French Foreign Legion. This took us to an illegal gold mine by a remote lake, from where the miners had only just scattered.

Also of great interest in French Guiana was a visit to a key rocket launch site of the European Space Agency. I was taken to a shiny complex from which satellites are regularly fired into orbit, and was even allowed to go in the rocket control room.

HOW TO DO IT: A 13-day Signature Venezuela trip with visits to Angel Falls and the Orinoco Delta costs from £3,500pp (journeylatinamerica.com). Guyana trips are available from coxandkings.co.uk. 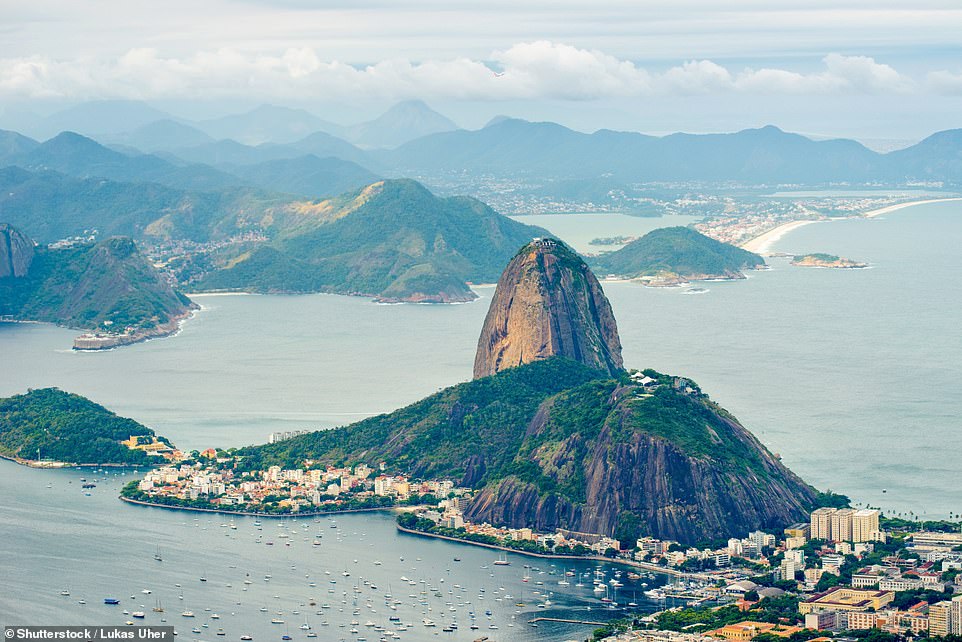 Simon with Waiapi people in the Amazon. ‘The villages of the Waiapi people have changed little in centuries, yet their traditional life is under threat from logging and mining interests,’ he says

It’s the biggest country on the continent, with a population of 215 million. A visit to one of the most remote regions of the Amazon was eye-opening: the villages of the Waiapi people have changed little in centuries, yet their traditional life is under threat from logging and mining interests.

Important projects, however, are being conducted in the forest to show how the region could grow valuable crops for medicines without destroying the environment.

Then, after a long interruption caused by the pandemic, my journey restarted. The full extent of Covid was made apparent by vast new cemeteries by the large city of Manaus. Nearly 700,000 Brazilians died, making it one of the worst-hit countries in the world.

Onwards, my trip led me to Rio de Janeiro, with its wonderful beaches and iconic Sugarloaf Mountain. The scenery may have been great, yet the city was under threat from flash floods and baking heat brought on by climate change.

The good news, however, was that work was under way to monitor these dangers with a high-tech control centre.

A lovely stay in a forest cottage by the Atlantic was followed by a brilliant wildlife tour to spot golden lion tamarins.

HOW TO DO IT: The 15-day Simply Brazil tour covering Rio de Janeiro, Paraty and the Iguazu Falls costs from £4,243pp (theultimatetravelcompany.co.uk). Also try trailfinders.com. 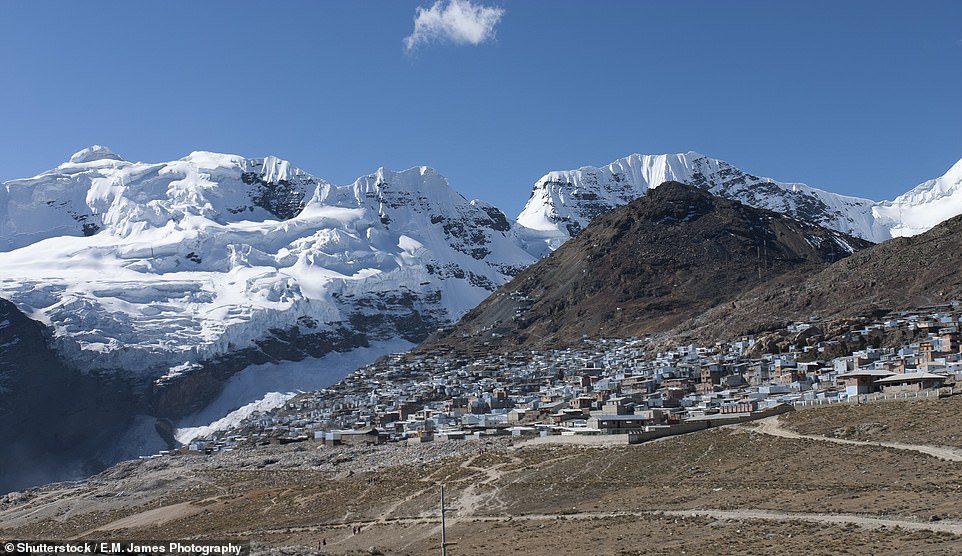 Simon paid a visit to the mining town of La Rinconada in Peru, pictured. ‘At 5,100 metres above sea level, it’s one of the planet’s highest human settlements,’ he says

Next up was Peru and Bolivia, where I saw the Andes mountains and took in the Inca ruins at Machu Picchu, one of the world’s greatest ancient sights.

Since the arrival of the Europeans in South America, indigenous groups in this region have suffered badly and descendants of the Inca people are now among the poorest. I visited some of their communities, where locals highlighted their troubles.

A dramatic day in the company of the Peruvian police was to follow, as they raided a cocaine-making facility. Officers explained that the reality of life for many farmers in the area involved growing coca leaves (the primary ingredient of cocaine).

Another excursion led to the mining town of La Rinconada in Peru. At 5,100 metres above sea level, it’s one of the planet’s highest human settlements. The miners work hard in search of tiny fragments of gold.

In Bolivia, I moved on to La Paz, the world’s highest capital at 3,650 metres above sea level. There, cholas — indigenous women who wear traditional skirts and bowler hats — told of their long-term battle for greater representation in politics.

HOW TO DO IT: A 25-day Explore Peru and Bolivia trip costs from £3,645pp, excluding flights (intrepidtravel.com). Take a look at explore.co.uk, too. 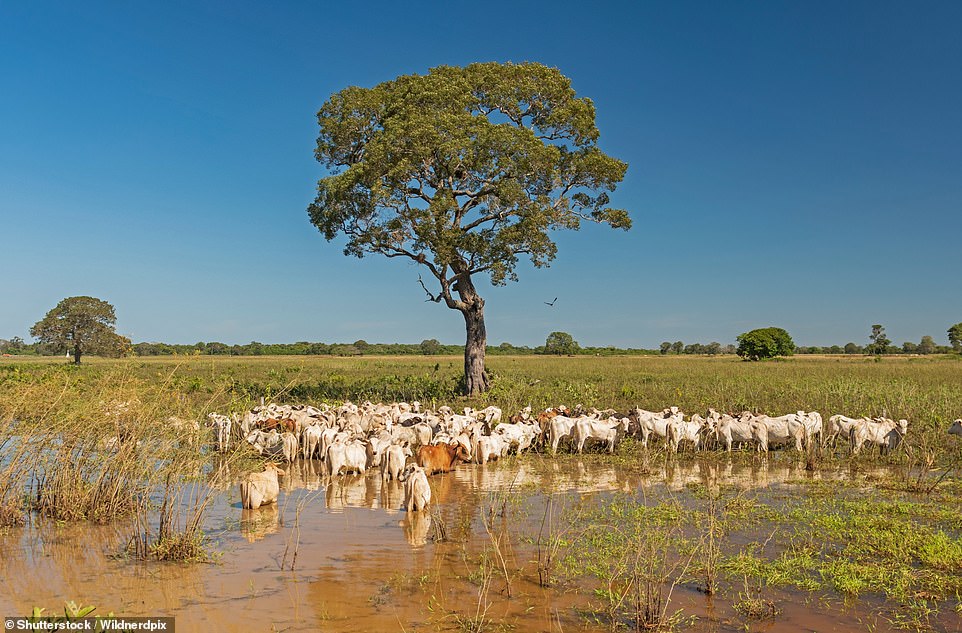 In the wetlands of Pantanal, pictured, Simon met farmers who are struggling to cope with the risk of flooding caused by climate change

From Bolivia, where a visit to desolate but beautiful salt flats was arranged (these are believed to contain huge reserves of lithium, crucial for electric car batteries, under them), the route continued back into Brazil.

We made a trip to the wetlands of Pantanal, meeting farmers struggling to cope with the risk of flooding caused by climate change. I had a close encounter with a jaguar in this region.

Then it was onwards to yet another country, Paraguay, where Mennonites — ultra-conservative communities who eschew many of the trappings of the modern world — drove around in horses and carts and spoke Low German. They are successful farmers with vast cattle ranches, which has required the chopping down of large areas of forest.

In this area, I met the Ayoreo people, many of whom are struggling to defend their land against yet more outside logging and mining interests in the Chaco forest.

HOW TO DO IT: The 12-day Paraguay Missiones and Iguazu Tour costs from £3,600pp, excluding flights (responsibletravel.com). Also try audleytravel.com. 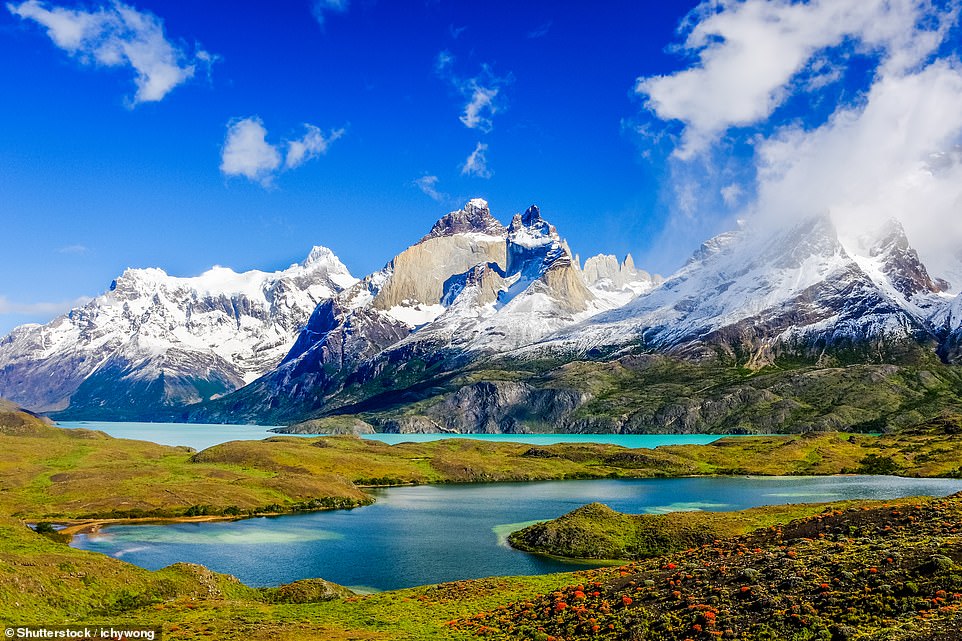 When Simon visited the mountains of Patagonia, pictured, he found that the Mapuche people ‘were in the midst of elaborate New Year celebrations’

Last but by no means least, this South American adventure finished in the archipelago of Tierra del Fuego, shared between Chile and Argentina.

Before getting to the far south, a trip was organised to the beautiful expanse of the Atacama Desert in Chile, one of the driest places on Earth, and the mountains of Patagonia. Here, Mapuche people were in the midst of elaborate New Year celebrations.

The journey moved on to Buenos Aires, Argentina’s charming capital with its old colonial buildings and national treasures. I enjoyed the sights, but the rampant inflation dwarfs anything back in Britain.

On finally arriving in the southern tip of the continent, amid the spectacular scenery of Tierra del Fuego, locals explained they have resisted the arrival of large salmon farms, said to have damaged the environment further north.

An optimistic note on which to end my epic adventure.

HOW TO DO IT: A 13-day Chile, Argentina and Patagonia tour costs from £2,999pp excluding flights (mercuryholidays.co.uk). Also try pura-aventura.com.