A new image of the surface of Mars has revealed the planet may have experienced episodic flooding millions of years ago.

The Zhurong Mars rover has returned ground-penetrating radar data of the Utopia Planitia basin – an impact crater thought to have once hosted an ancient ocean.

The image was constructed from the data by scientists from the University of Chinese Academy of Sciences and Peking University, and shows multiple sub-layers on the basin’s surface.

The sedimentation and layered structure suggests the Red Planet sustained regular flooding during the Late Hesperian to Amazonian period.

However, the team did not find any liquid water in the upper 80 metres of the basin, but believe some could be present lower down.

A: The low-frequency radar imaging profile, with the black line denoting the topography relative to the landing site. The dashed line above 10 m denotes the estimated bottom of the regolith top layer. The two lines at depths of around 30 and 80 m represent the boundary between the second and third layers and the base of the third layer, respectively. The two dashed lines at around 10 and 40 m deep roughly separate finer-grained and coarser-grained rocky blocks within the second and third layers, respectively. B: The composition of the layers from the radar data 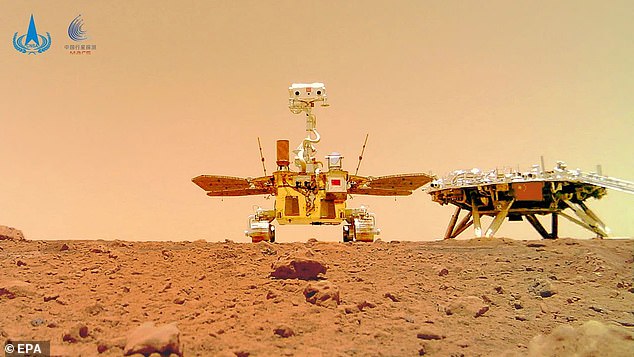 In 2021, the Zhurong rover (pictured) travelled to the planet in the uncrewed Tianwen-1 spacecraft, and descended from it to touch the Martian surface on May 22 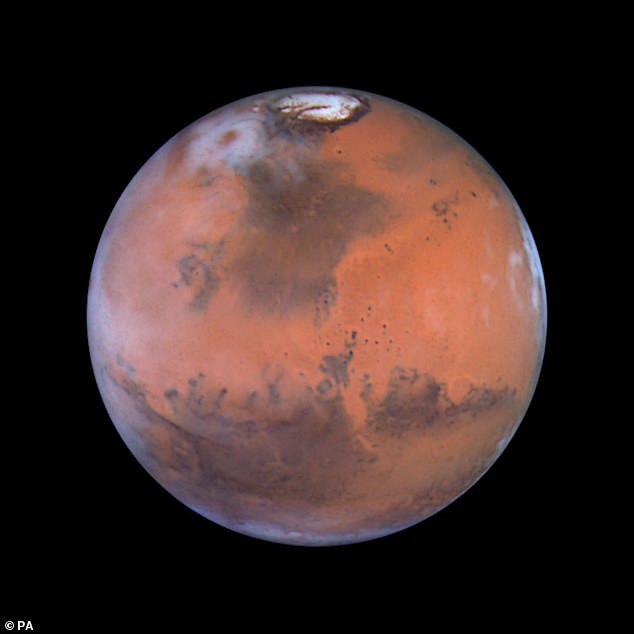 The sedimentation and layered structure of the Utopia Planitia basin suggests the Red Planet experienced regular flooding during the Late Hesperian to Amazonian period. Pictured: An image of Mars taken by the Hubble Space Telescope

The Utopia Planitia basin is a key target for exploration, however we have not received any new ground-based data from this region for 45 years.

NASA’s Viking-2 lander touched down touched down in the crater on September 3 1976 and performed soil analysis, took images and searched for signs of life.

But, in 2020, the Zhurong rover travelled to the planet in the uncrewed Tianwen-1 spacecraft, and descended from it to touch the Martian surface on May 14, 2021.

Since its landing and deployment, Zhurong has steadily made a southwards journey towards a shoreline of an ancient ‘ocean’ to obtain scientific data.

The solar-panel-powered robot sports a number of cameras for imaging the Martian landscape, along with six scientific instruments for measuring climatic conditions, chemical compounds, magnetic fields and radar for looking underground. 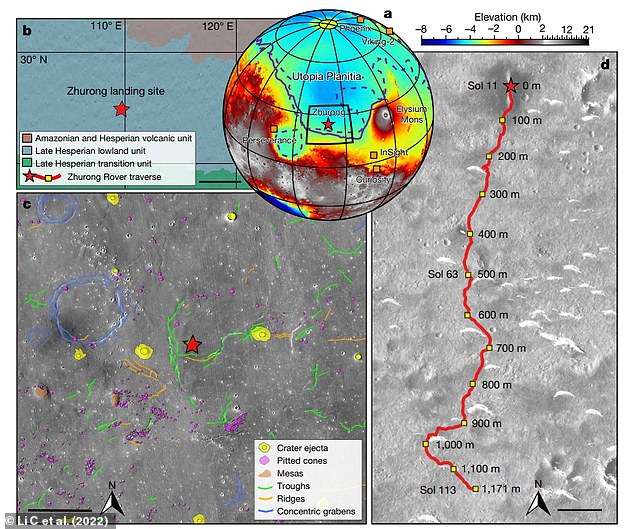 Model of the ancient resurfacing of southern Utopia Planitia of Mars. A: During the Late Hesperian to Early Amazonian a catastrophic flood event occurred, leading to the formation of a sequence of deposits as the flood discharge subsided (scale bar 20 m). B: A resurfacing event – probably associated with a transient flood, weathering or repeated impacts – occurred in the Amazonian period, resulting in a structure with relatively smaller boulders and cobbles atop the older sediments. C: Water was lost to high latitudes as a result of Mars’ tilt, which led to the formation of the near-surface regolith and current deposition and erosion processes from the wind

Tools: Cameras and scientific instruments, including to measure climate and the chemical composition of material found on Mars’ surface

In a paper published today in Nature, a low frequency radar image taken by the rover has been released that provides insight into southern Utopia Planitia.

Zhurong had travelled about 1,117 metres from its landing site in order to collect the data necessary for the image’s construction.

It revealed that the ground of the basin is segmented into four horizontal sub-surface layers, approximately 70 metres thick in total.

On the surface lies a layer of regolith – loose rock and dust – that is less than 10 metres thick, on top of a layer of smaller, younger rocks.

The thickest layer – roughly 30 to 80 metres down from the surface – consists of larger rocks, while the fourth layer did not give enough radar reflections to suggest a coherent structure.

This structure is suggestive of sediment deposition following episodic flooding millions of years ago.

During the Late Hesperian to Early Amazonian period, a catastrophic flood event may have occurred, leading to the formation of a sequence of sediment deposits as the flood discharge subsided.

These became the larger rocks of the third surface, and their chaotic distributions suggests their older age.

Finally, water was lost to high latitudes as a result of Mars’ tilt or ‘obliquity’, which led to the formation of the near-surface regolith, that is susceptible to deposition and erosion processes from the wind.

However, the authors say alternative models still need to be investigated.

The radar data did not provide direct evidence for the presence of liquid water in the upper 80 metres of the basin surface, but it may still be present at lower depths.

These findings could improve our understanding of the planets’ geological and hydrological history.

Zhurong is currently hibernating through the Martian winter and dust storms, but is expected to become live again in December and head south for further exploration. 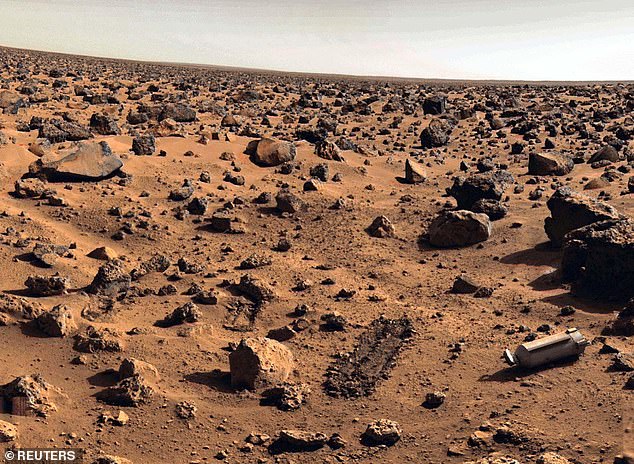 In September last year, the Zhurong rover beamed back a vast panorama of Mars in celebration of its first 100 days on the planet.

The stunning 360-degree view showed the rover’s solar arrays and antenna in front of the dusty red Martian soil.

It blasted off from Earth in July 2020, tucked in the belly of the Tianwen-1 spacecraft – which entered Martian orbit in February.

Chinese officials are using the rover, named after the Chinese god of fire, to analyse Martian soil and atmosphere, capture images, chart maps and look for water and signs of ancient life.

The rover has a number of instruments on it and is able to communicate with Earth via the Tianwen-1 orbiter, which has a ‘high speed data relay.’

In addition, it also has a number of other tools, including Ground-Penetrating Radar (GPR) imagined up to 330ft below the surface of Mars; Mars Surface Magnetic Field Detector (MSMFD) to find evidence of a magnetic field and track it; and Mars Meteorological Measurement Instrument (MMMI) to study the Martian weather on the Red Planet.

In September last year, the Zhurong rover beamed back a vast panorama of Mars in celebration of its first 100 days on the planet. Zhurong is surveying Utopia Planitia – a large plain in the planet’s northern hemisphere – for signs of water or ice that could lend clues as to whether Mars ever sustained life 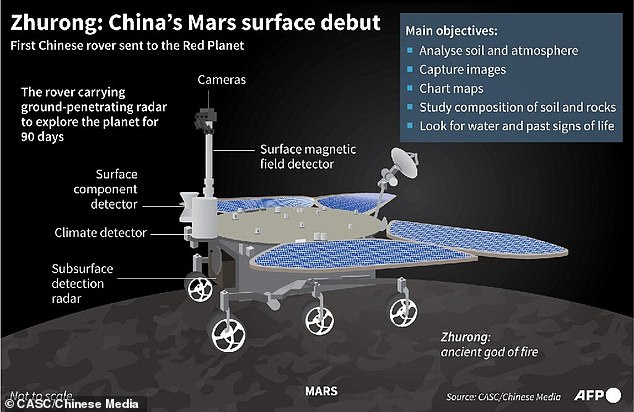 Chinese officials are using the rover, named after the Chinese god of fire, to analyse Martian soil and atmosphere, capture images, chart maps and look for water and signs of ancient life

The Shenzhou-12 spacecraft is launched from the Jiuquan Satellite Launch Center on June 17, 2021 in Jiuquan, Gansu Province of China, carried on the Long March-2F rocket, to Chinese Tiangong space station

April 24, 1970: The first Chinese satellite, Dong Fang Hong 1, was launched from the Jiuquan launch centre in the northwestern province of Gansu. That made China the fifth country to send satellites into orbit, following the Soviet Union, the United States, France and Japan.

Oct. 15, 2003: China became the third country after the United States and Russia to send a man into space with its own rocket. Astronaut Yang Liwei spent about 21 hours in space aboard the Shenzhou-5 spacecraft.

Sept. 25, 2008: China’s third manned spacecraft, Shenzhou-7, was launched into space, where an astronaut clambered out of the spacecraft for the nation’s first space walk.

Oct. 1, 2010: China’s second lunar exploration probe blasted off from a remote corner of the southwestern province of Sichuan.

Sept. 29, 2011: The Tiangong-1, or ‘Heavenly Palace 1’, China’s first space lab, was launched to carry out docking and orbiting experiments.

Nov. 3, 2011: China carried out its first docking exercise between two unmanned spacecraft, the Shenzhou-8 spacecraft and Tiangong-1 module, a key test to securing a long-term manned presence in space.

Dec. 14, 2013: China landed an unmanned spacecraft on the moon in the first ‘soft-landing’ since 1976, joining the United States and the former Soviet Union in accomplishing the feat.

Sept. 15, 2016:China launched its second experimental space laboratory, the Tiangong-2, part of a broader plan to have a permanent manned space station in service around 2022.

Jan. 3, 2019: The Chang’e-4 lunar probe, launched in December, touched down on the far side of the moon. Previous spacecraft have flown over the far side but not landed on it.

June 23, 2020: China put into orbit its final Beidou satellite, completing a navigation network years in the making and setting the stage to challenge the U.S.-owned Global Positioning System (GPS).

July 23, 2020: China launched an unmanned probe to Mars in its first independent mission to another planet.

Nov. 24, 2020: China launched an uncrewed mission, the Chang’e-5, with the aim of collecting lunar material to help scientists learn more about the moon’s origins.

April 29, 2021: China launched Tianhe, the first and largest of three modules of its upcoming space station.

May 15, 2021: China became the second country after the United States to land a robotic rover on the surface of Mars.

Next post Why a ‘carpetbagger’ attack is particularly potent in Pennsylvania