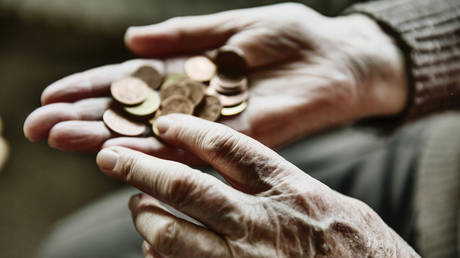 A growing number of citizens over the age of 65 have less than 60% of the median income, Funke media group found

Around one in six Germans over the age of 65 is at risk of falling into poverty, according to a study by the Federal Statistical Office and published by the German media group Funke.

According to the finding, elderly women are more likely to be at risk of poverty. The poverty risk rate for women over 65 was 19.3%, while for men it was 15.1%.
In response to the findings, the left-wing faction of the Bundestag demanded government intervention.

“The chancellor’s ‘stable pensions’ are a fairy tale. Poverty in old age is exploding,” parliamentary group leader Dietmar Bartsch told the Funke newspaper. He reiterated his party’s demand for a minimum pension of €1,200, and warned that soaring energy prices this winter may leave many more elderly Germans destitute.

Germany has been grappling with record-high inflation, which accelerated to 8.8% in August, the highest level in nearly 50 years. Energy prices were up 35.6% year-on-year despite the relief measures, while food prices soared by 16.6%, accelerating for the sixth month in a row.