Losing 8st and dropping several dress sizes after having children may sound like a cause for celebration — but not for Aimee Cooper.

For her dramatic change in shape was not down to a diet and exercise regimen but rather a little-known condition that typically affects people who’ve had their gallbladder removed (one of the most common procedures performed by the NHS).

It’s left the 28-year-old former shop assistant from Wellington, Shropshire, who lives with her fiancé Gary, in debilitating pain and too exhausted to play with their children, aged eight and four.

‘Before, I could eat, run about with my children and enjoy life,’ says Aimee. ‘Now I can’t eat, throw up all the time, have no energy and am in pain daily.’

Known as sphincter of Oddi dysfunction (SOD), it is caused by a muscle malfunction. This usually opens and closes to release juices and bile from the liver into the small intestine to digest food. But in people with the condition, this muscle, which emerges from the liver, doesn’t open properly, causing a back-up of bile and severe pain in the abdomen. 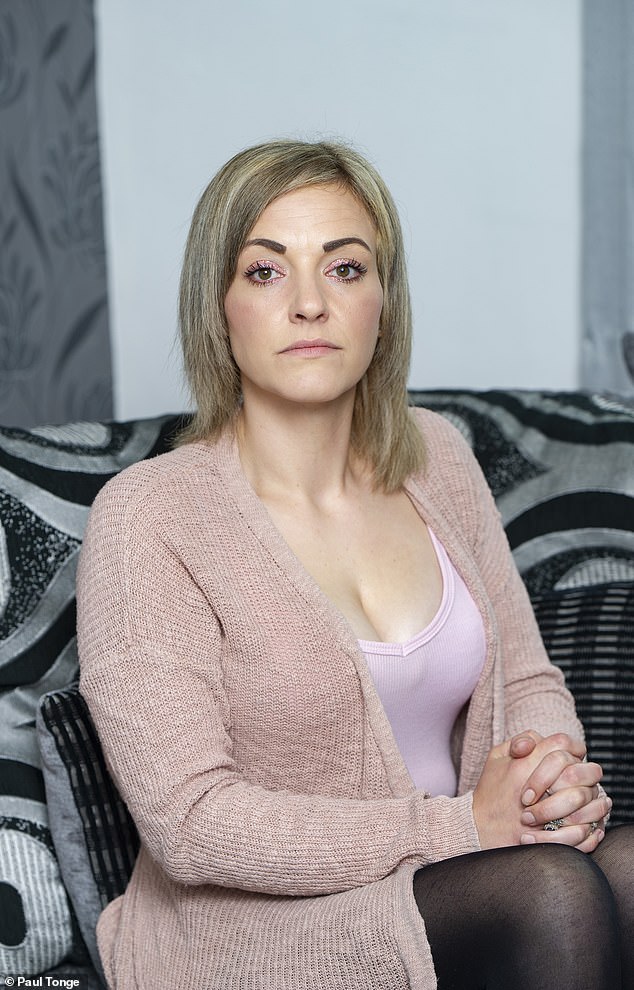 SOD affects 10 per cent of the 70,000 people a year in the UK who have had their gallbladder removed.

The gallbladder, a small, pouch-like organ, stores bile but is not necessary for healthy functioning of the body. Removing it is a routine operation to treat gallstones (crystallised fatty deposits).

However, in some cases surgery can lead to problems with the sphincter of Oddi — possibly due to scarring from the passing of gallstones, or nerves to the sphincter being damaged during the operation.

Around 1.5 per cent of the population (hundreds of thousands of people in the UK) are thought to have sphincter of Oddi syndrome, says Professor Brian Davidson, a consultant hepatic biliary and liver transplant surgeon at the Royal Free London NHS Trust.

While it’s usually triggered by surgery to remove the gallbladder, it can also occur spontaneously.

In cases not caused by surgery it is often wrongly attributed to gallstones, as the symptoms — pain, particularly on the right side of the abdomen, nausea and vomiting — are the same.

Sphincter of Oddi dysfunction tends to affect mostly women. This may be because they are more prone to gallstones, as the female hormones oestrogen and progesterone make bile more concentrated (especially during pregnancy) and reduce contractions of the gallbladder, so the bile is more stagnant and likely to crystalise.

‘Rapid weight loss and yo-yo dieting can also increase your risk of getting gallstones,’ says Christian Macutkiewicz, a consultant general and hepato-pancreato-biliary surgeon at Manchester Royal Infirmary, and director of The Gallstone Clinic.

One theory is that dieting reduces the number of times the gallbladder contracts.

Even though hers was a classic case of SOD, Aimee struggled to get a diagnosis. It was shortly before she became pregnant with her first child that Aimee started to experience excruciating pain in the right side of her abdomen. 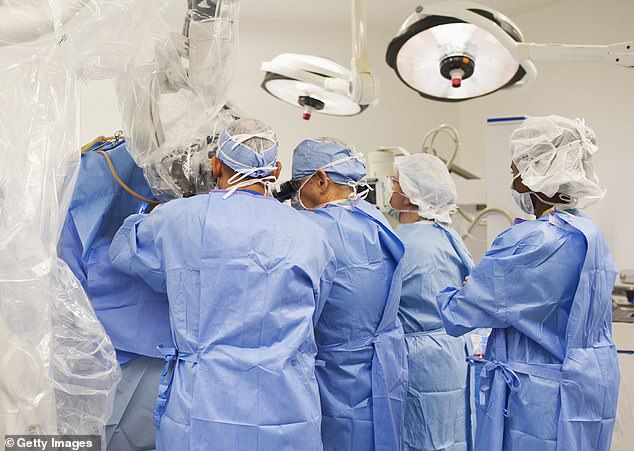 During the procedure, carried out under local anaesthetic, doctors diagnosed SOD and decided to cut the muscle to widen it, in order to relieve the problem. However, afterwards Aimee was still in pain, requiring multiple hospital visits and morphine [File photo]

Aimee became pregnant with her first child and six months after the birth in 2014, she was rushed to hospital in acute pain, again caused by gallstones, and this time underwent emergency surgery to remove her gallbladder.

For many patients, this operation — known as cholecystectomy — is a cure for the problem of recurrent gallstones.

‘I was told that now it was out, I’d be free of the pain that had plagued me on and off for nearly two years,’ says Aimee.

‘I was warned against eating fatty or spicy foods — because these are harder to digest and could lead to pain without the gallbladder there to help control bile flow — but that was it.’

But just three weeks later Aimee experienced the same excruciating sharp pain, which started in the right side of her abdomen and spread up her right shoulder. ‘It felt identical to a gallstone attack, but, as I didn’t have a gallbladder, I thought: “Am I having a heart attack?” ’ she says.

Aimee went to A&E where blood tests showed high levels of the enzyme alanine transaminase, a marker for liver damage.

But as her gallbladder had been removed, doctors concluded it must be unrelated to her previous problems — one even queried whether her high liver enzyme levels was due to heavy drinking.

‘I was furious,’ says Aimee. She was given morphine for the pain and sent home after doctors could find no cause for the attack. But the pain kept coming back — and Aimee started losing weight.

‘I was eating carefully, avoiding fatty or spicy foods, never drinking, taking care of myself,’ she says. ‘But this pain — which felt just like my gallbladder attack pain — kept returning.

‘I felt so unwell. I tried eating but was throwing up or having diarrhoea every few days.

‘I felt so weak and exhausted, I had to stop doing housework and give up work.’

While pregnant with her second child, she lost weight, and by the time her baby was born in 2018, ‘I was exhausted and unable to enjoy it, I was in so much pain,’ she says. She continued to lose weight, shedding 8st over the course of eight years — going from 15st to 7st (she is 5ft 3in).

While SOD ‘doesn’t normally cause any long-term damage,’ the patient suffers with pain that could be avoided if they were diagnosed, says Mr Macutkiewicz. Finally, last year, Aimee’s consultant, now suspecting her sphincter of Oddi, advised an invasive diagnostic procedure called an endoscopic retrograde cholangio pancreatography (ERCP).

This involves inserting an endoscope — a thin tube with a camera on the end — down the gullet, through the stomach and into the bile duct. Treatment can also be carried out during the procedure if necessary. Although it carries a small risk of tearing the bile duct, Aimee decided to go ahead as she was ‘in such pain’.

During the procedure, carried out under local anaesthetic, doctors diagnosed SOD and decided to cut the muscle to widen it, in order to relieve the problem.

However, afterwards Aimee was still in pain, requiring multiple hospital visits and morphine.

Mr Macutkiewicz admits cutting the sphincter of Oddi does not always work. ‘It isn’t a magic wand,’ he says. ‘Some patients can get pancreatitis [inflammation of the pancreas] as a result of the operation and this complication is very dangerous. For others, the cut isn’t enough and it doesn’t help and the patient can still be in pain.’

This was the experience of Alison Fletcher, 47, an accountant from Stockport, who had her gallbladder removed in 2016. Just weeks later she developed severe pain and underwent an ERCP.

This didn’t help and she was ‘constantly back and forth to A&E, the pain was unbearable,’ she recalls.

She’s had four ERCPs in total but her symptoms still haven’t improved.

Aimee still struggles with daily pain and hopes to find another consultant who might offer different treatments.

Other possible SOD treatments include Botox injections into the area — some studies show this provides short-term relief in 80 per cent of patients.

Anti-spasmodic drugs, such as Buscopan, can also help.

Still in agony and unable to eat solid food, Aimee’s wish is simple: ‘I just want my life back again,’ she says.

When beauty routines cause health problems. This week: Dry shampoo may damage the scalp

Dry shampoo may let you skip a hair wash if you’re busy, but anecdotal evidence suggests excessive use may also lead to scalp damage — and potentially affect hair growth.

‘Relying on dry shampoo can contribute to an unnecessary build-up of product and oils on the scalp which, at a minimum, may lead to an itchy and irritated scalp and at worst, if left unchecked, may lead to fungal or bacterial infections,’ says Eleanore Richardson from the Institute of Trichologists. ‘And when the scalp environment isn’t great, hair growth can be less than optimum.’

So how often is it OK to use dry shampoo? ‘Keep it for emergencies only — if, say, you’re camping, or away from home for a night or two,’ says Eleanore Richardson.

‘Don’t use it for more than two days in a row and avoid completely if you have a sensitive scalp or a known scalp condition.’

How your position can affect medication. This week: Tilt your head when using your asthma inhaler

To open the airway and ensure asthma medication reaches the lungs, ‘it’s best to use your inhaler either sitting upright or standing as this helps to expand the lungs,’ explains Dr Samantha Walker, director of research & innovation at Asthma + Lung UK.

‘Tilting your head back slightly to extend the neck can further help open the airway and improve the delivery of the medicine.’ In a study on children with exercise-induced asthma, published in the journal Respiratory Medicine in 2015, trying this technique with preventative inhalers delayed the time when asthma symptoms occurred from 1.6 minutes to 2.5 in an exercise challenge. The Dutch researchers also found tilting the head led to less medication ending in the oropharynx (at the back of the mouth), reducing the risk of coughing, hoarseness or oral thrush.