The ‘Oscars’ of the UK hospitality industry has crowned its victors.

At a prestigious awards ceremony hosted by the AA at Grosvenor House in London, gongs were presented in categories including ‘Hotel of the Year’, ‘Restaurant of the Year’ and ‘Chefs’ Chef of the Year’.

The 2022 AA Hospitality Awards winners were picked by the AA’s inspectors, who spent the past year wining and dining their way through the UK’s restaurants and testing out the nation’s hotel rooms. Here are their verdicts… 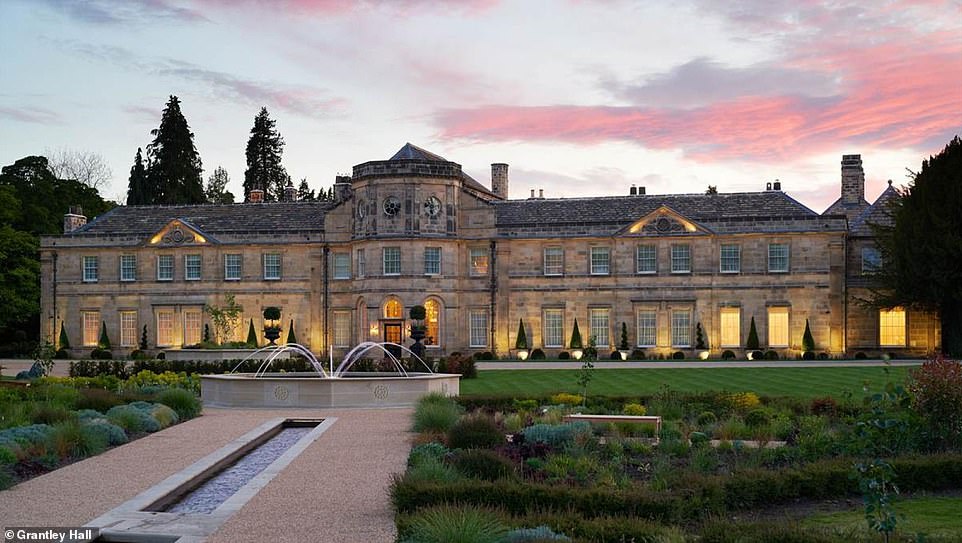 The AA has named its 2022 Hospitality Awards winners, with the historical Grantley Hall (pictured) in North Yorkshire scooping the title of England’s Hotel of the Year

The award for England’s Hotel of the Year goes to stunning Grantley Hall, a 17th-century property near Ripon, North Yorkshire, that offers a ‘real sense of luxury and exclusivity’.

‘Grantley Hall offers a wonderful fusion of contemporary style and historical character,’ said the visiting AA inspector, adding that it ‘boasts award-winning restaurants along with a state-of-the-art luxury gym, wellness centre and spa’.

Pan Pacific London, a hotel housed in an ‘impressive’ 43-storey bronze tower in the heart of the City of London, scoops the gong for London’s Hotel of the Year. ‘Since opening in September last year, the hotel has hit the ground running… the overall level of hospitality and service has a wonderful humility and grace,’ the AA inspector who visited the property observed.

The Welsh Hotel of the Year, meanwhile, is Llanerch Vineyard in Glamorgan. The establishment, which is the first UK hotel to be located on a vineyard, occupies a ‘wonderful setting with views over the vines and the quiet Welsh countryside beyond’.

RESTAURANT OF THE YEAR

HOTEL OF THE YEAR

SPA HOTEL OF THE YEAR

HOTEL GROUP OF THE YEAR

SMALL HOTEL GROUP OF THE YEAR

COLLEGE RESTAURANT OF THE YEAR

COLLEGE RESTAURANT OF THE YEAR FINALISTS

HOUSEKEEPER OF THE YEAR 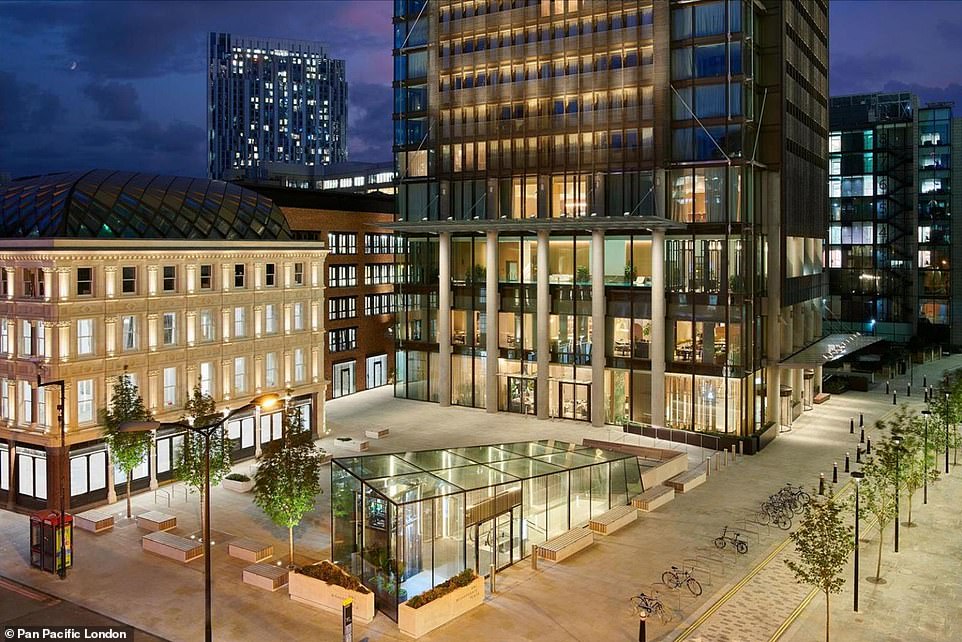 Pan Pacific London, a hotel housed in an ‘impressive’ 43-storey bronze tower in the heart of the City of London, has been named London’s Hotel of the Year 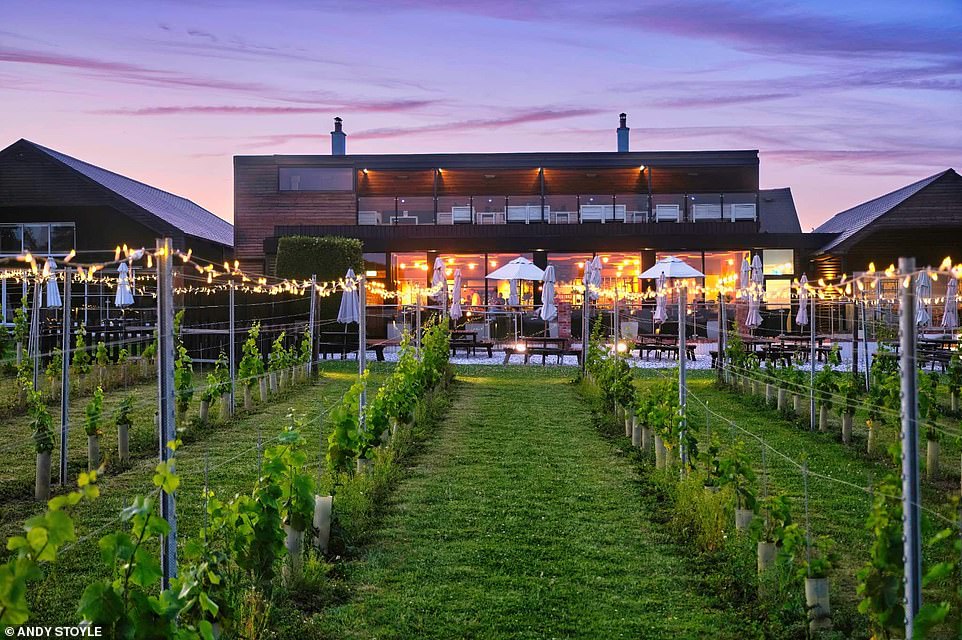 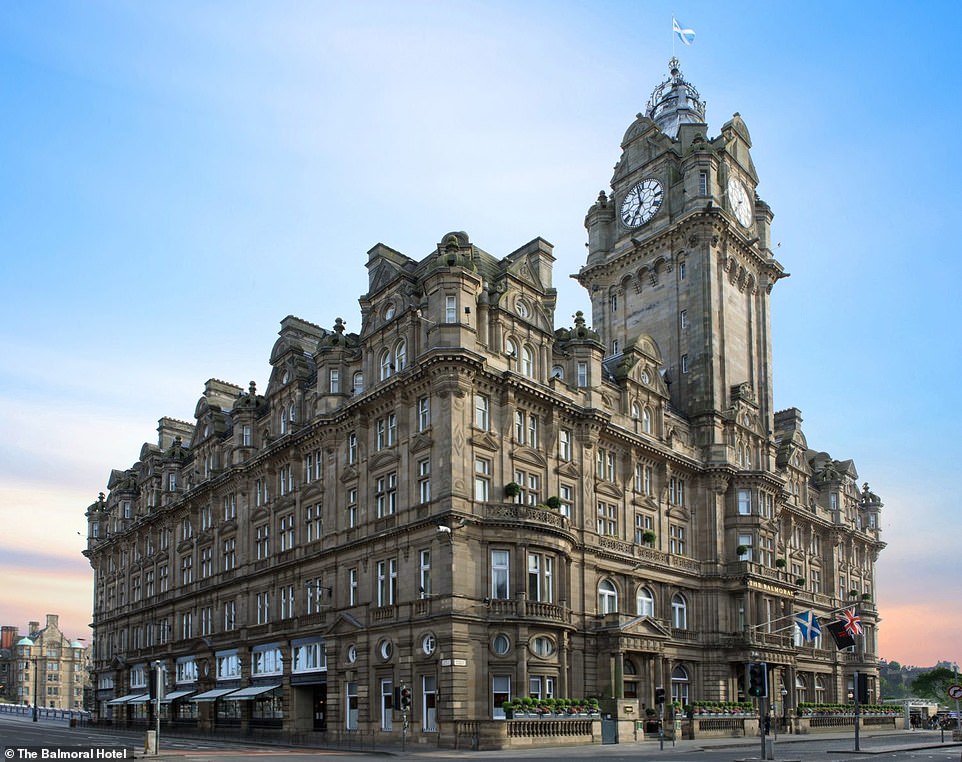 Bedrooms and public areas have been ‘beautifully refurbished’ at The Balmoral in Edinburgh, which is Scotland’s Hotel of the Year 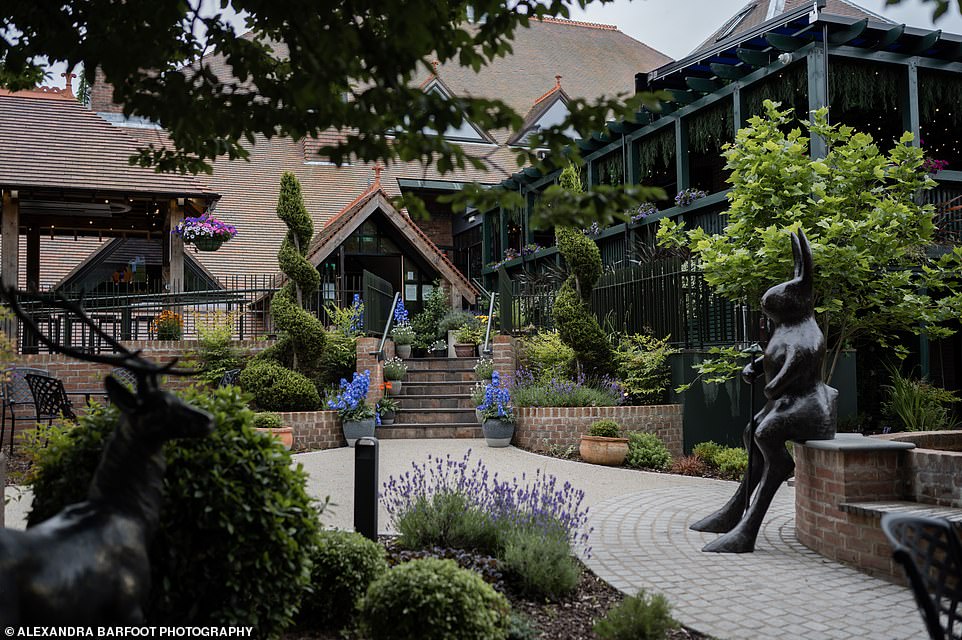 The gong for Northern Ireland’s Hotel of the Year goes to The Rabbit (above), a ‘destination hotel and spa experience’ in the village of Templepatrick

The Balmoral in Edinburgh is Scotland’s Hotel of the Year – the AA inspector that checked in was particularly taken by the landmark hotel’s recent renovation.

‘Bedrooms and public areas have been beautifully refurbished to a very high standard, where Balmoral tartan, Hebridean blues, heather hues and classic Scottish art create a wonderful look and feel,’ said the inspector.

Finally, the gong for Northern Ireland’s Hotel of the Year goes to The Rabbit in the village of Templepatrick, County Antrim. The establishment – a ‘destination hotel and spa experience’ – has been a ‘tremendous success’ since its opening last year. 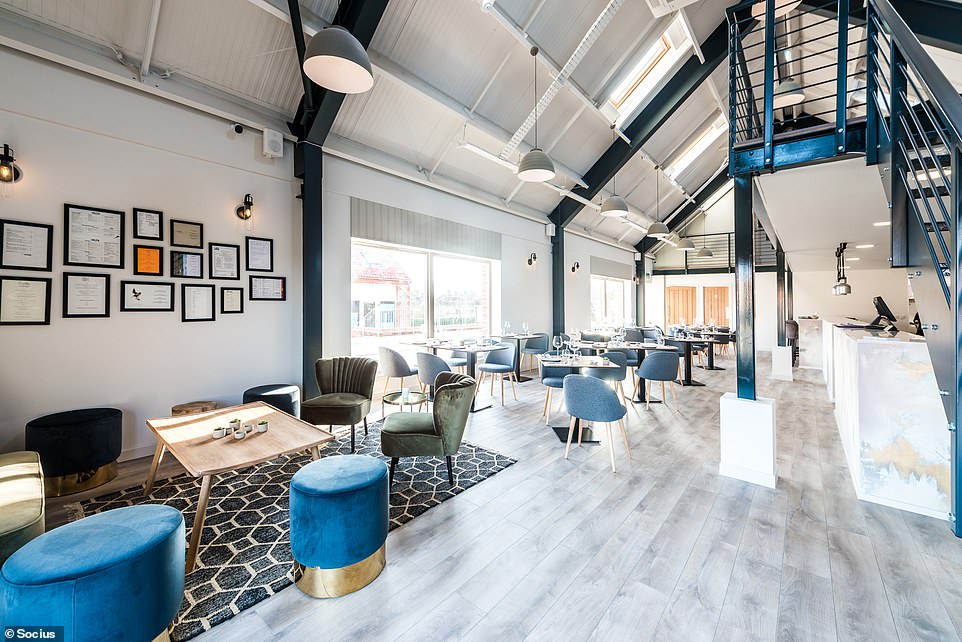 England’s Restaurant of the Year is Socius, pictured, in Norfolk. Here, the theme is ‘very much modern British tapas’, according to the AA

Snapping up the prize for England’s Restaurant of the Year is Socius, a ‘gem of place’ in Burnham Market, Norfolk.

‘The menu changes regularly and dishes are designed to share; the theme is very much modern British tapas,’ noted the AA.

London’s Restaurant of the Year is Chez Bruce in Wandsworth. ‘A fixture on the London dining scene since the mid-nineties, Chez Bruce is set in a small row of shops and has the airy charm of a neighbourhood restaurant,’ said the AA, adding that ‘the mood is elegant and subtly refined, much like the food’. 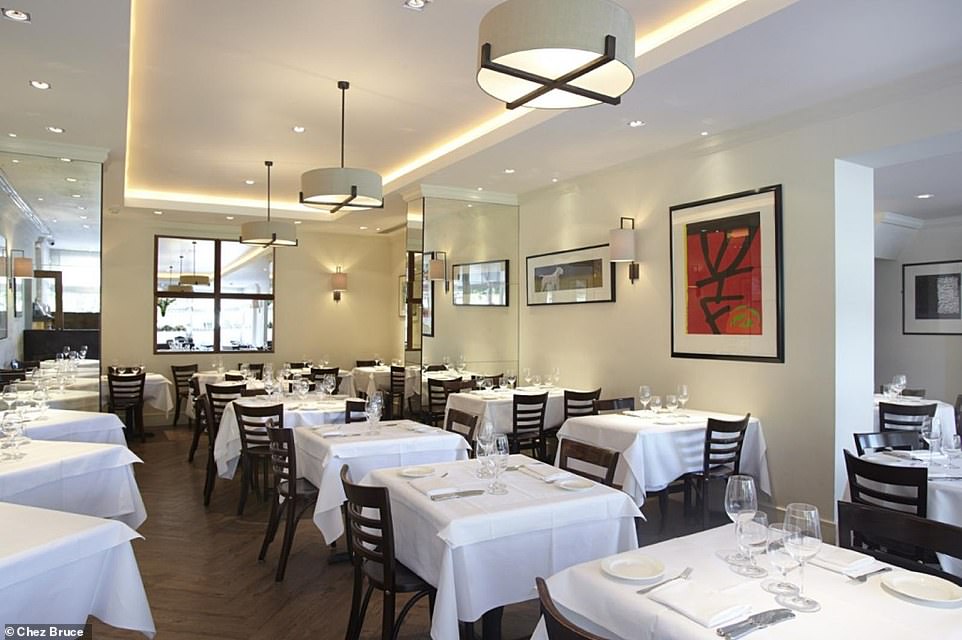 Diners can expect ‘elegant and subtly refined’ food at London’s Restaurant of the Year, Chez Bruce in Wandsworth 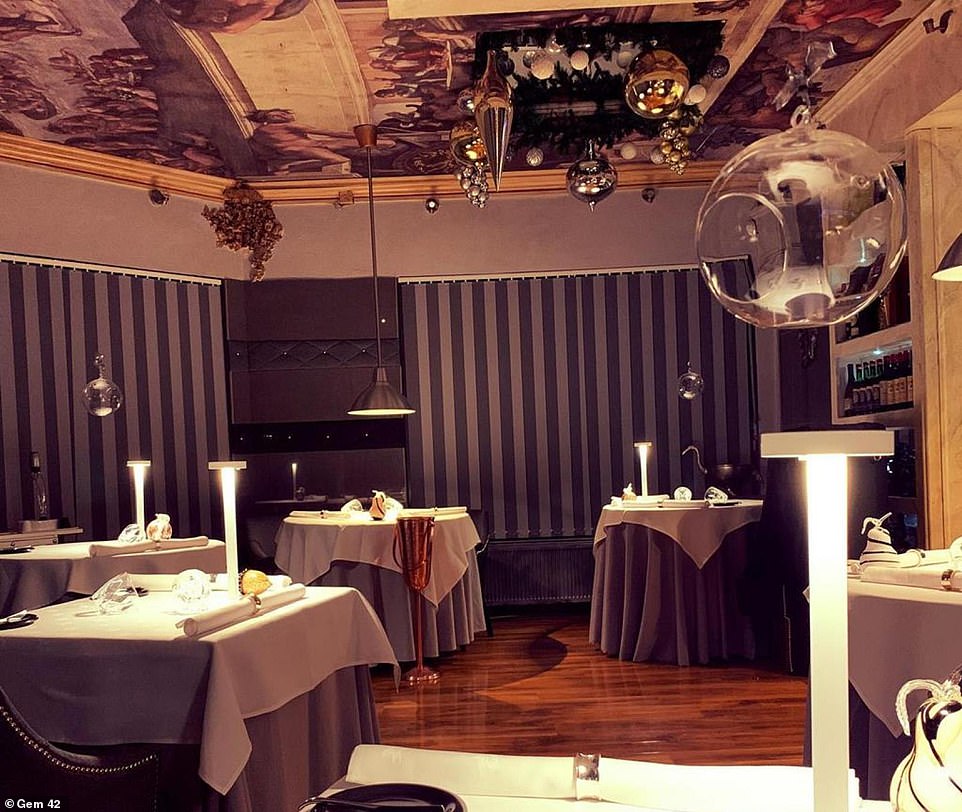 Newport’s Gem 42, an eatery with an ‘exuberant Mediterranean feel’, is Wales’ Restaurant of the Year

Gem 42 in Newport – where the ’emphasis is on Italian style and ingredients, combined with top-quality Welsh seasonal produce’ – bags the title of Wales’ Restaurant of the Year.

According to the inspector who was dispatched to the eatery, it has an ‘exuberant Mediterranean feel, with Botticelli-style ceilings and crisply dressed tables with Murano glass ornaments’.

Scotland’s Restaurant of the Year is The Cellar, a restaurant housed in a 17th-century former smokehouse and cooperage in the Fife coastal town of Anstruther.

It has a ‘rustic’ ambience and presents’ inventive modern Scottish cooking’.

Those who prefer to retire straight to bed after dinner will be keen to note that Britain’s best restaurants with rooms were also honoured at the ceremony.

The Angel at Hetton in North Yorkshire is England’s top Restaurant with Rooms.

Describing the 15th-century ‘roadside inn’, the AA said: ‘The recently refreshed and updated interiors are the perfect setting for the famous culinary skills of Michael Wignall.’

The Fernery at The Grove, Narberth, Pembrokeshire

The Loch & the Tyne by Adam Handling, Old Windsor, Berkshire

The Pig in the South Downs, Arundel, West Sussex 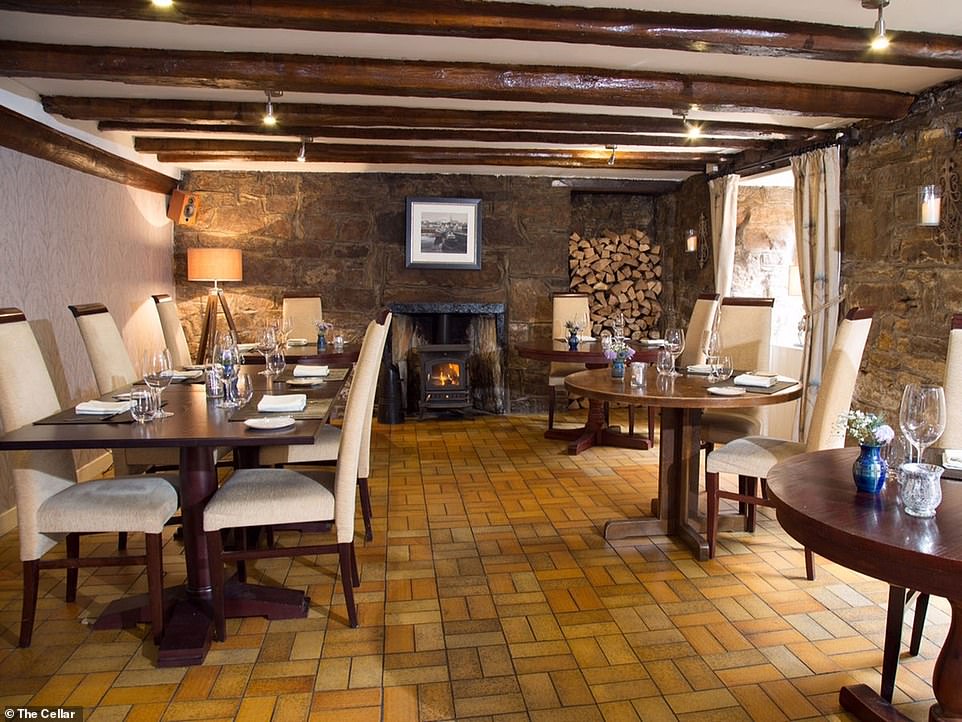 Scotland’s Restaurant of the Year is The Cellar, a restaurant housed in a 17th-century former smokehouse and cooperage in the Fife coastal town of Anstruther 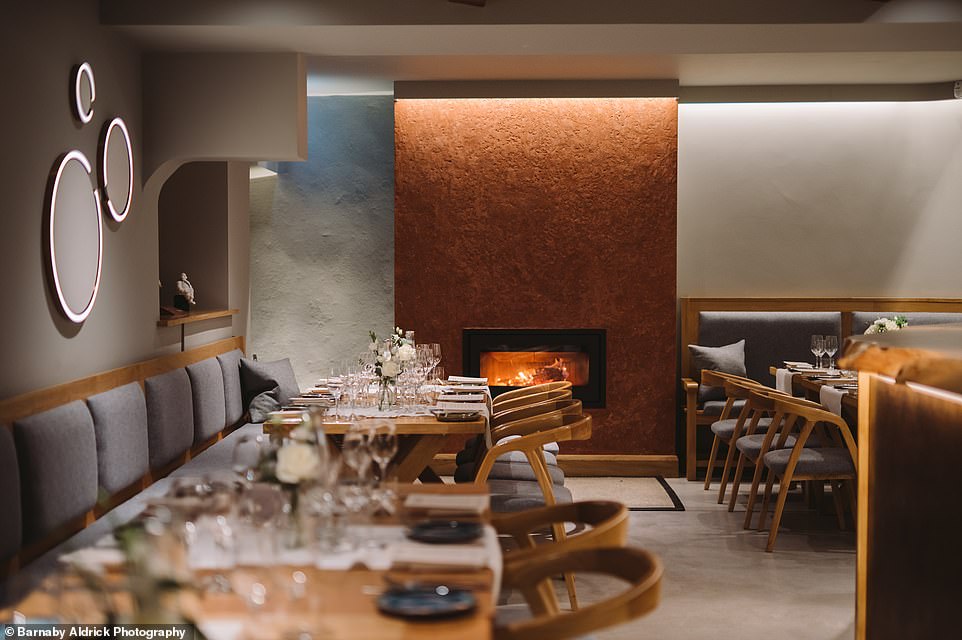 The Angel at Hetton in North Yorkshire, pictured above, is England’s top Restaurant with Rooms 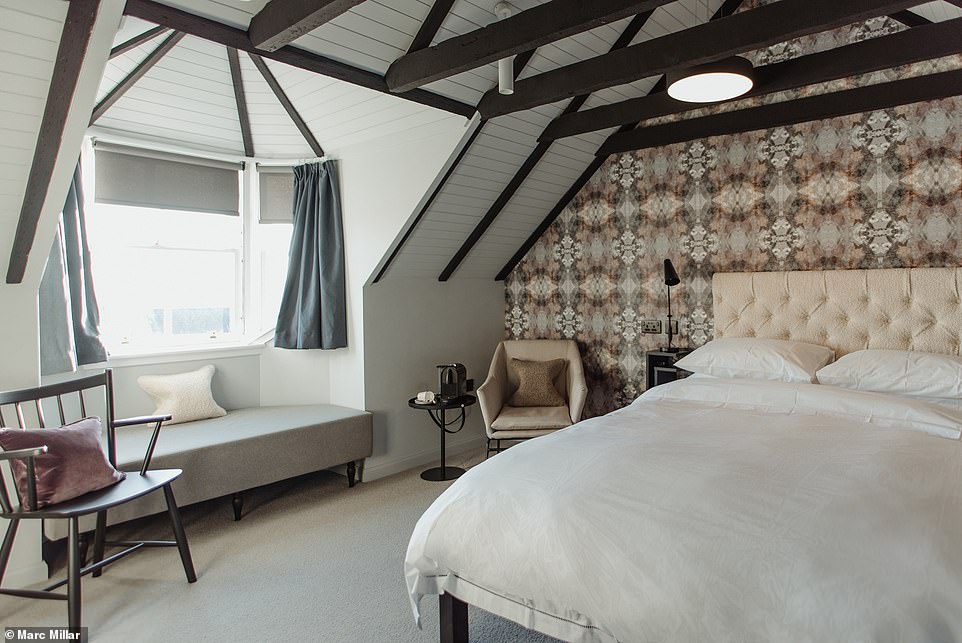 The Bonnie Badger in East Lothian – a ‘high quality’ establishment – is Scotland’s leading Restaurant with Rooms. Pictured is the inn’s Deluxe Loft Room 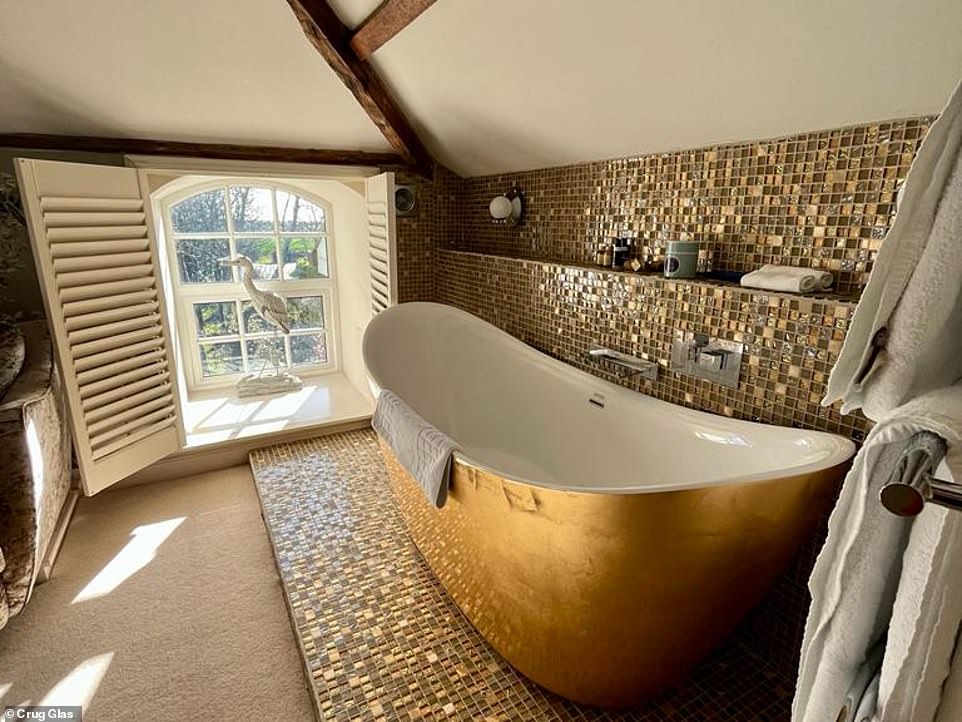 Crug Glas in North Pembrokeshire is the top Restaurant with Rooms in Wales. Above is the golden-hued ensuite bathroom in one of the guest rooms

Crug Glas in North Pembrokeshire, which has ‘deeply comfortable rooms’ that are ‘individual in style’ is the number one Restaurant with Rooms in Wales.

The Bonnie Badger in East Lothian, meanwhile – a ‘high quality’ establishment that was ‘rescued from near dereliction’ – is Scotland’s leading Restaurant with Rooms.

CHEF’S CHEF OF THE YEAR 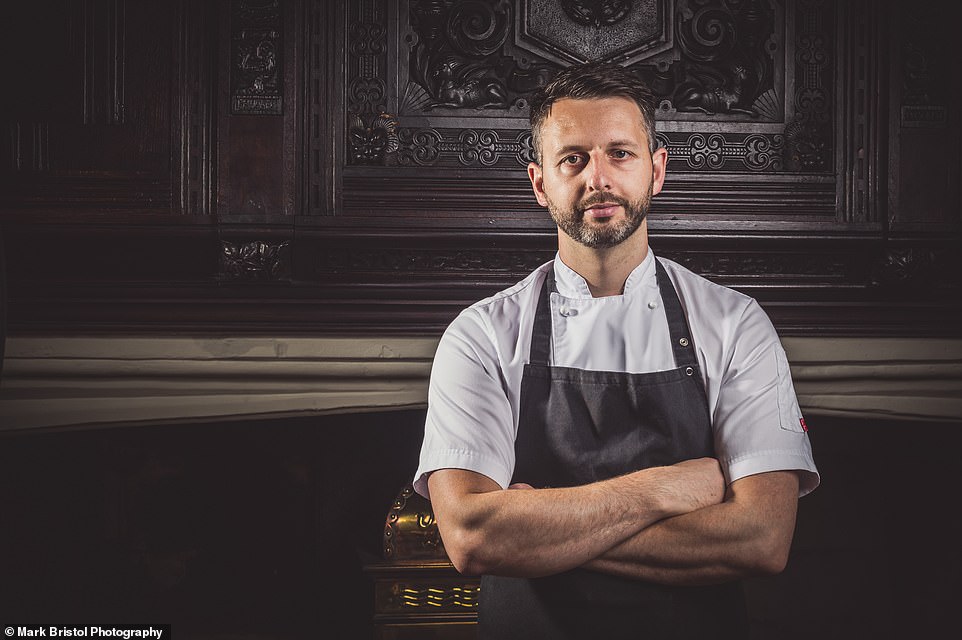 The Chefs’ Chef of the Year award goes to Mark Birchall (above), Chef Patron at the five AA rosette-restaurant Moor Hall in Lancashire

The Chefs’ Chef of the Year award ‘offers all AA Rosette-awarded chefs the chance to decide which of their peers deserves the ultimate recognition of their performance over the past 12 months’.

This year, the accolade goes to Mark Birchall, Chef Patron at Moor Hall in Aughton, Lancashire, which ‘under his patronage has been awarded five AA Rosettes’.

The Chorley-born chef was previously Executive Chef of L’Enclume, a three-Michelin-star restaurant in the Lake District village of Cartmel.

Commenting on his win, Simon Numphud, Managing Director of AA Media, said: ‘We are delighted to honour Mark Birchall with the AA Chef’s Chef award at the AA Hospitality Awards this year.

‘We would like to congratulate Mark for his hard work and determination over this year, and the last 20 years of his career.’

For more information on the winners, visit business.ratedtrips.com/awards/aa-awards-2022.

Next post Ex-Fed economist offers odds on avoiding a recession: ‘Less than 50-50’