An egg a day might keep the flab at bay! Study finds people who eat eggs five times a week are slimmer

From scrambled to poached or fried, everyone loves their eggs done differently in the morning.

But now researchers say your preference doesn’t matter, as long as you have them five days a week.

For a study has found people who eat eggs nearly every day are slimmer.

Although not proof that eggs are the magical flab-busting remedy, experts said the findings suggest eating more of them ‘may lead to a healthier body composition’. 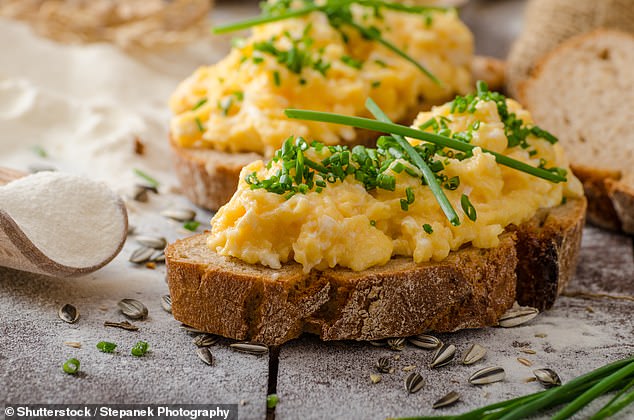 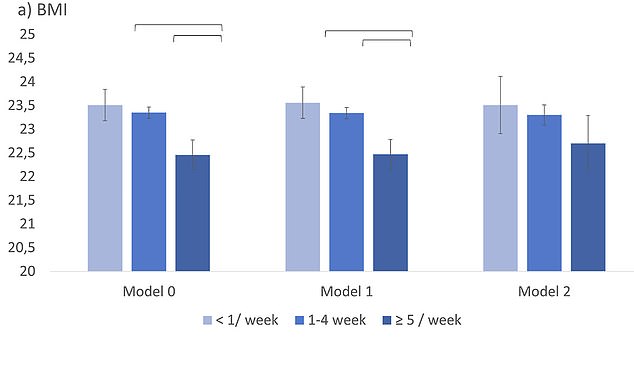 On average, those eating the least eggs had BMIs of around 23.5, while those eating the most were around 22.5. Both figures are considered to be in the healthy range. Graphs show: Model 0 is the unadjusted BMIs for people eating less than one egg a week (light blue), one to four (middle blue) and at least five (dark blue), while Model 1 adjusts for age and sex and Model 2 adjusts for protein intake

Go to work on an egg for a lower risk of heart attacks and strokes, scientists say.

Participants who ate one whole egg a day had higher levels of healthy proteins and good cholesterol in their blood, and lower levels of the bad kind.

This combination cuts the risk of cardiovascular disease by preventing the arteries from clogging, which in turn lowers the risk of heart attacks and strokes.

Eggs went out of fashion decades ago, after research linked eating them to a rise in bad cholesterol.

The Egg Marketing Board’s ‘go to work on an egg’ campaign was blocked from relaunching in 2007 after a watchdog ruled it did not encourage healthy eating.

But the latest study found people who ate eggs had more of a protein in their blood called APOA1, a major building block of good cholesterol.

Spanish medics compared the body composition of 355 university students, to see whether eating eggs had any potential influence.

All of the adults involved in the research, published in Clinical Nutrition, were in the age range of 18-30.

Height and weight measurements were logged to produce a BMI score. Waist circumference was also recorded.

Participants were broken down into groups based on how often they ate eggs: less than once a week, one to four times and at least five.

The study did not record what way the eggs were prepared.

Analysis showed those who ate eggs at least five times a day had significantly lower BMIs and fat percentage than the two other groups.

Meanwhile, after adjusting for age and sex, those eating the least eggs had a waist circumference-height ratio of just under five, compared to 0.45 in the near-daily group. A lower score is better.

Dietary questionnaires also allowed the experts to work out their regular protein and calorie intake, to determine whether that was behind the results.

Analysis between the egg-eating groups were tiny, suggesting the benefits of eggs came solely from their protein.

This suggested the protein in the eggs was the main factor behind the larger gaps.

One large egg contains around 6g of protein, compared to around 62g in a 250g steak.

Writing in the journal, they said: ‘The association between egg consumption and body composition is mediated by protein intake.

‘This finding is important from a public health perspective, suggesting that higher egg consumption (≥5 eggs/week) may lead to a healthier body composition, especially due to higher protein intake.’

But the study was merely observational, meaning researchers could not prove eating eggs was the actual cause behind the differences in body composition.

Eating too many eggs can raise cholesterol levels in the blood, increasing the risk of heart disease.

Bad cholesterol can form plaques in the arteries, which narrow the blood flow and increase the chances of suffering a heart attack or stroke.

Previous post US to ‘deepen’ engagement in Indo-Pacific – VP Harris