Google has created a browser ‘Easter Egg’ of a spacecraft crashing into the web browser when a user searches ‘NASA Dart’, to celebrate the success of the planetary defence test.

The graphic shows a probe shooting across the DART-related search results, before it collides and disappears in a cloud of dust, leaving the page askew.

The demonstration is triggered by the search terms ‘NASA DART’, ‘DART’, ‘DART probe’ or ‘double asteroid redirection test’, the full name of the mission.

NASA tweeted about the Easter Egg earlier today, telling followers: ‘Your Google search could reveal something smashing! Search for “NASA DART” on to see a demonstration of browser, uh, planetary defense.’

The $325 million (£298 million) mission was a rehearsal of what may be required if a space rock does one day threaten our planet.

It was launched from California last November with the target of Dimorphos – a small moonlet asteroid which orbits a larger asteroid called Didymos. 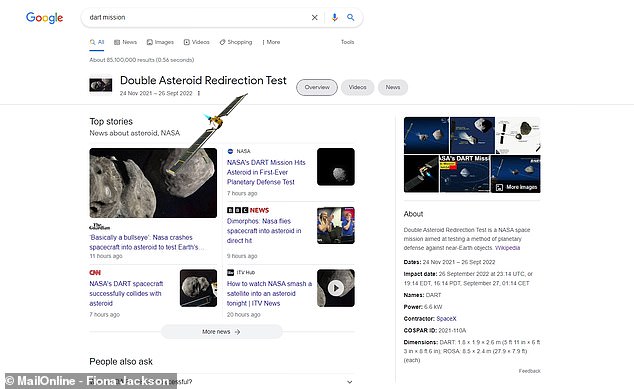 Google has created a browser Easter Egg of a spacecraft crashing into the web page when a user searches ‘NASA Dart’ to celebrate the launch of the test mission. 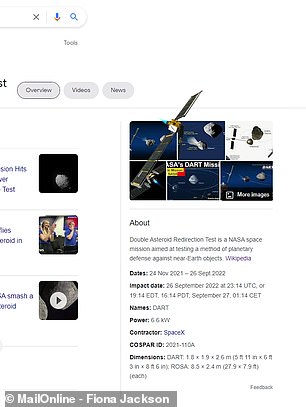 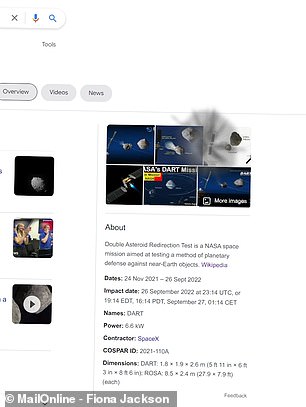 The graphic shows a probe shooting across the DART-related search results, before it collides and disappears into a cloud of dust, leaving the page askew. The demonstration is triggered by the search terms ‘NASA DART’, ‘DART’, ‘DART probe’ or ‘double asteroid redirection test’, the full name of the mission 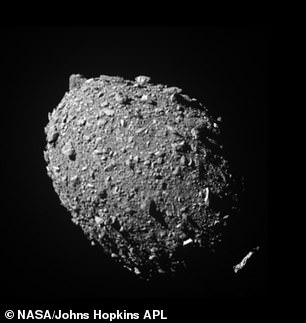 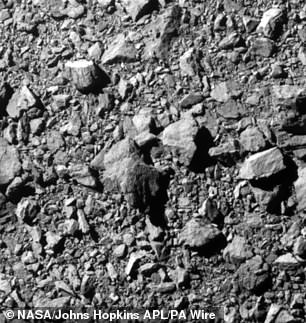 WHAT IS A GOOGLE ‘EASTER EGG’?

Other than a chocolate treat, ‘Easter Eggs’ are hidden features, messages, jokes and cultural references inserted into media.

Google has been adding them into its products and services since at least the year 2000.

This includes the search engine, where animations and games can be triggered when a user types in certain search terms.

Famous Google Easter Eggs triggers include ‘snake’ that starts a game of Snake, and ‘superb owl’ that shows a Super Bowl information panel with an image of an owl wearing a crown, poking fun at the common typo.

DART was launched aboard a SpaceX Falcon 9 rocket, which was called NASA’s ‘Armageddon moment’.

This is because the mission is reminiscent of the 1998 movie ‘Armageddon’, starring Bruce Willis, in which astronauts travel to an asteroid on course for a collision with Earth, in the hope of destroying it before impact.

The vending machine-sized spacecraft separated from the rocket’s second stage a few minutes after lift-off and began its journey towards Dimorphos.

Dimorphos does not pose a threat to our home planet, but was chosen as a target because it can be observed by ground-based telescopes for the test mission.

The theory is that if an asteroid were on a collision course with Earth, you would only need to change its velocity by a small amount to alter its path.

NASA considers any near-Earth object ‘potentially hazardous’ if it comes within 0.05 astronomical units (4.6 million miles) and measures more than 460ft in diameter.

The DART technique could prove useful for altering the course of an asteroid years or decades before it bears down on Earth with the potential for catastrophe.

An asteroid the size of Dimorphos could cause a continent-wide destruction on Earth, while the impact of one the size of the larger Didymos would be felt worldwide. 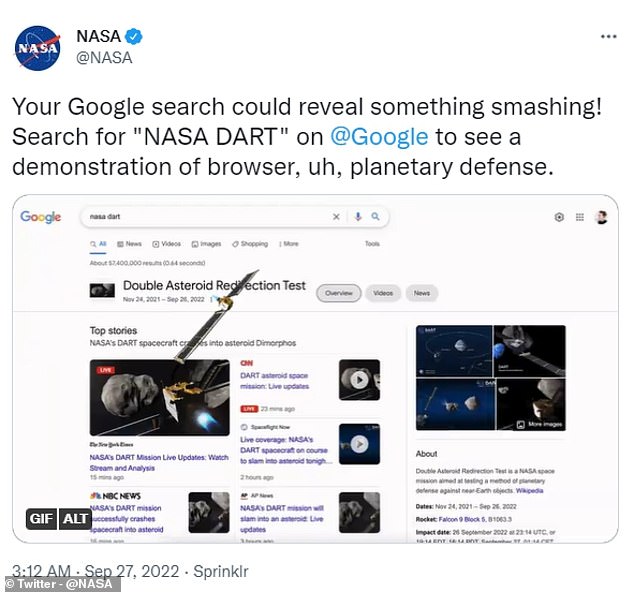 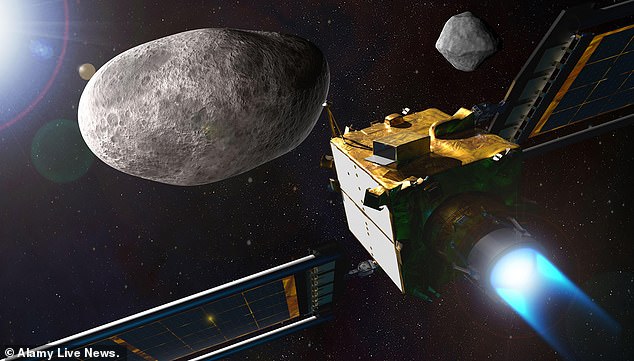 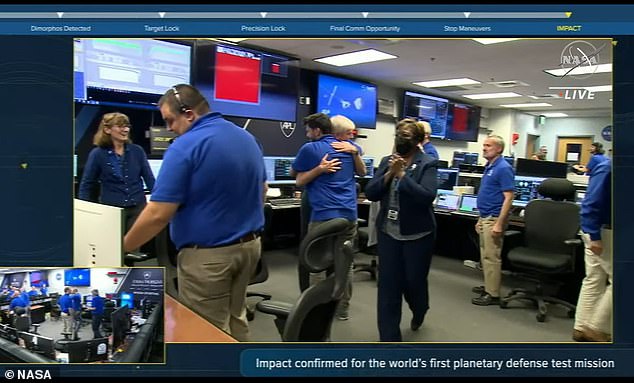 Confirmation of success came seconds after the collision, sparking an applause among the ground team at the Johns Hopkins University Applied Physics Laboratory 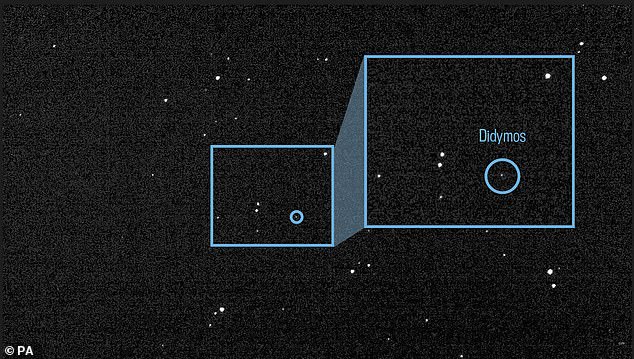 The Double Asteroid Redirection Test was launched last November ahead of a year-long journey to crash into the small asteroid Dimorphos, which orbits a larger one called Didymos

WHAT IS THE NASA DART MISSION?

It intentionally crashed into the asteroid to slightly change its orbit.

Dimorphos is about 525 feet in diameter, and although it doesn’t pose a danger to Earth, NASA wants to measure the asteroid’s altered orbit caused by the collision.

When it hit Dimorphos, the 1,210 pound DART spacecraft changed the speed of the rock by a fraction of a per cent, a bit like when a cue ball hits a moving snooker ball.

This demonstration of planetary defence will inform future missions that could one day save Earth from a deadly asteroid impact.

On September 11, a toaster-sized satellite called LICIACube separated from DART in order to capture images of the collision at a safe distance of 34 miles (55km).

Confirmation came seconds after the 19:14 ET (00:14 BST) impact, sparking an applause among the ground team at the Johns Hopkins University Applied Physics Laboratory in Maryland.

By striking Dimorphos head on, NASA hopes it pushed it into a smaller orbit, shaving 10 minutes off the time it takes to circle Didymos, which is currently 11 hours and 55 minutes.

Scientists believe the impact carved out a crater, hurled streams of rocks and dirt into space and, most importantly, altered the asteroid’s orbit.

Engineers said DART is completely destroyed, but there might be pieces of it in the crater it left during impact – and some of the team said they shed a tear knowing the craft is now gone.

Adams said the craft landed 55 feet from the targeted landing site, but still enough to assume it was a success.

‘It was basically a bullseye. I think, as far as we can tell, the first planetary defense test was a success, and we can clap to that,’ she said in a post-mission press conference.

‘Earthlings should sleep better, and I definitely will.’ 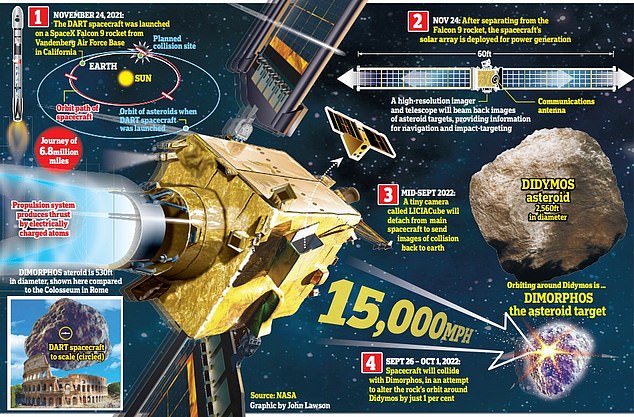 By striking Dimorphos head on, NASA hopes DART pushed it into a smaller orbit, shaving 10 minutes off the time it takes to circle Didymos, which is currently 11 hours and 55 minutes. The graphic above shows how the mission worked

WHAT COULD WE DO TO STOP AN ASTEROID COLLIDING WITH EARTH?

Currently NASA would not be able to deflect an asteroid if it were heading for Earth but it could mitigate the impact and take measures that would protect lives and property.

This would include evacuating the impact area and moving key infrastructure.

Finding out about the orbit trajectory, size, shape, mass, composition and rotational dynamics would help experts determine the severity of a potential impact.

However, the key to mitigating damage is to find any potential threat as early as possible.

NASA is currently moving forward with a refrigerator-sized spacecraft capable of preventing asteroids from colliding with Earth. A test with a small, nonthreatening asteroid is planned for 2024.

This is the first-ever mission to demonstrate an asteroid deflection technique for planetary defense.

The Double Asteroid Redirection Test (DART) used what is known as a kinetic impactor technique—striking the asteroid to shift its orbit.

The impact could change the speed of a threatening asteroid by a small fraction of its total velocity, but by doing so well before the predicted impact, this small nudge will add up over time to a big shift of the asteroid’s path away from Earth.